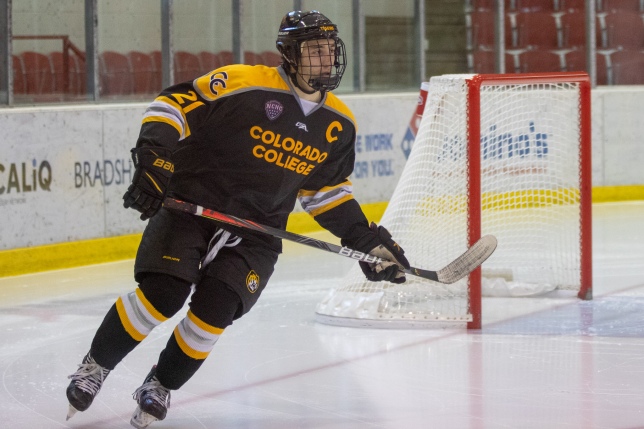 St. Cloud, MN – It appears the St. Cloud State University Huskies will be adding some much-needed veteran support on offense with the addition of former Colorado College Tiger and University of Minnesota Gopher Grant Cruikshank via the transfer portal.

With eight players departing plus three players in the transfer portal, the Huskies are filling key positions, particularly at forward where they lose 52 goals, 57 assists, and 109 points as a result of the departure of fifth-year players, Kevin Fitzgerald and Easton Brodzinski and seniors Sam Hentges and Nolan Walker.

Cruikshank, the son of speedskaters Bonnie Blair and Dave Cruikshank is a former captain for the Colorado College Tigers. The 5’11” 187-pound left-shooting center with be a fifth-year transfer for the Huskies and most importantly can fill the need of playing the center position which was a void after Nolan Walker departed.

A transfer to the University of Minnesota for the 2021-22 season, he got caught up in the forward depth and the youth movement of the Gophers appearing in 33 games for the Gophers but seeing his offensive production take a step backward with 7 goals and 8 assists for 15 points. Previously with the Tigers, the two-time captain produced 30 goals and 15 assists for 45 points ( including two 11-goal seasons) in 90 games. Previously, in the BCHL with the Penticton Vees, he produced 43 goals and 31 assists for 74 points over two seasons.

Against the Huskies, in 10 games Cruikshank had success with 3 goals and 4 assists for 7 points.

Cruikshank will be reunited with former Colorado coach, RJ Enga, now with the Huskies, and former teammate and goaltender Dominic Basse who announced his transfer to the Huskies this past week.

Cruikshank possesses a strong, accurate shot and will bring experience down the middle of the ice for the Huskies. He’s expected to be a key contributor to the offense next season.

The SCSU coaching staff is unable to comment on this player at this time until the transfer is complete.

However, it was known Cruikshank was on the Huskies radar last year before he decided to transfer to the Gophers.