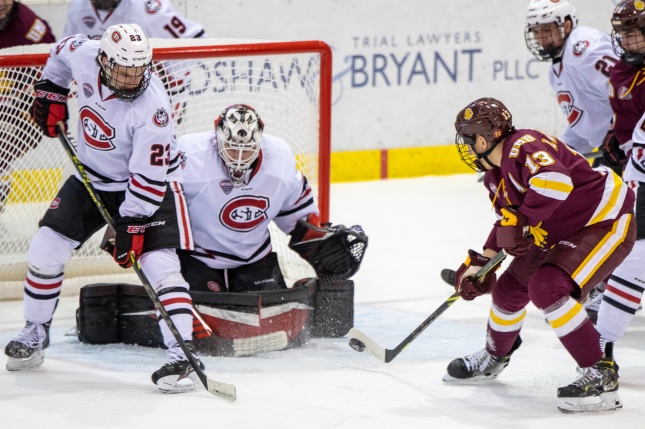 St. Cloud, MN – When two teams are as closely matched as the UMD Bulldogs and the SCSU Huskies mistakes will generally dictate the outcome of the contest. A lack of discipline by the Huskies in the second period changed the momentum and course of the game as a barrage of four goals erased an SCSU one-goal lead burying the Huskies by a 5-2 score.

For the Huskies faithful, they now can only hope the teams are still playing on Sunday in a deciding game for a berth in the NCHC Frozen Faceoff next weekend. The loss was also damaging to the team’s all-important Pairwise ranking dropping them from #7 to #10.

The Bulldogs, whose strength this season has been on the defensive side of the puck, doubled their game average of 2.53 goals per game and in combination with some strong goaltending from Ryan Fanti place themselves in the driver’s seat in this quarterfinal series.

In his post-game press conference, a clearly disappointed Brett Larson commented ” We are really disappointed. They came out and wanted it more early. They were hungry, they got to loose pucks, they won puck battles and put us on our heels. It’s exactly what we would have liked to have done to them.”

“I thought we gave them a couple of goals based on our own mistakes,” said Larson. “You can’t give a team like this goals. You have to make them work for it and we didn’t on a couple of them tonight. We took two back-to-back penalties and it just killed us. That was the big momentum shift of the game.”

Larson had no problem with the effort of goaltender, Jaxon Castor who played in place of David Hrenak who fell ill prior to the game along with team captain and defenseman, Spencer Meier. “I thought Jaxon played well. It wasn’t on him. I thought we let him hang out to dry tonight,” said Larson.

“Hopefully, the one thing you correct is that you have some pride in that jersey and the program you’re playing for,” said Larson. “To see another team come in and out-compete us in our rink is tough to take. We need to show up and play with some pride for that jersey. We have to find a way to get back after it tomorrow.”

The Bulldogs clearly had more jump to start the game but it was the Huskies who nearly scored early in a period with few whistles. Just 6:38 into the period, a bad angle shot by Jack Peart got behind UMD goaltender Ryan Fanti and bounced off the post negating an early lead for SCSU.

But, the Huskies were given another early opportunity to put their power play to work when Dominic James was penalized for tripping at 11:17. However, the Huskies’ power play which is still churning above 30% could only muster one shot on goal.

The Bulldogs were doing a good job controlling the puck and winning the majority of the races to loose pucks and after some extended puck control in the SCSU zone, the Bulldogs scored first on a goal by Noah Cates at 14:07, his 9th goal of the season. Koby Bender, who was the star of the game, sent a shot on goal from the left circle that was saved by Castor but the rebound came to Cates who beat Castor high glove side as he was trying to slide back into position.

But, despite being outshot  11-6 and outplayed in the period, the Huskies evened the score with 38 seconds remaining in period one. Fitzgerald fought for position in front of the UMD goal and re-directed a shot by Micah Miller past Fanti to knot the game at 1-1. This was Fitzgerald’s team-leading 17th goal of the season.

A penalty to Dominic James at the 20:00 minute mark of period one had the Huskies on the man advantage to start period two and the Huskies upped their lead to 2-1 with a goal by Nolan Walker (Perbix, Brodzinski) at 1:36. Perbix wristed a shot from just inside the blue line and Walker tipped it past Fanti for the one-goal lead.

The goal seemed to jump-start the Huskies who began to exert more offensive zone pressure and they nearly added to their lead at 3:27 were it not for a big save by Fanti on a point-blank shot by Sam Hentges.

But success on a faceoff in the SCSU zone paid off for the Bulldogs. Jesse Jaques won the draw back to Darian Gotz and his shot from the top of the left circle was tipped by Koby Bender to tie the game at 2-2.

A penalty to assistant captain, Seamus Donohue for slashing at 9:24 further turned the momentum in favor of the Bulldogs. Noah Cates fed Koby Bender with a cross-ice pass and he beat an out-of-position Castor with a quick shot into a wide-open net for a 3-2 UMD lead.

Another penalty to Donohue just 27 seconds later for cross-checking had the Bulldogs scoring again at 11:40 but fortunately for the Huskies was waved off due to a hand pass.

Koby Bender added another and his third of the game to complete a hat trick at 16:44 to increase the UMD lead to 4-2. He beat Castor with a quick shot from the bottom of the left circle for his 7th goal of the season.

The Bulldogs then capped things off with their final goal of the game by Blake Biondi at 17:18 of period two. On a breakdown of defensive assignments, Biondi got behind the SCSU defense and was fed the puck by Dominic James and he lifted it past Castor for the 5th and final goal of the game.

Next Game: The teams return to the ice on Saturday (Mar. 12) at 6:00 PM CT at the Herb Brooks National Hockey Center.