St. Cloud, MN – Forget about trying to snag a regular-priced ticket for this weekend’s series between Colorado College and the top-ranked SCSU Huskies. Word is there is a limited number of “verified resale” tickets available.

This is quite a change in the excitement directed at a hockey program that has finished in the cellar of the NCHC four times since the 2013-14 season and has never finished higher than tied for fifth place. Fueling this excitement is the completion of Ed Robson Arena, the new on-campus home of Colorado College hockey. This multi-purpose state-of-the-art facility is literally across the street from campus creating a resurgence of interest from the on-campus students as opposed to a 15-minute drive to the World Arena, the previous home of the Tigers. 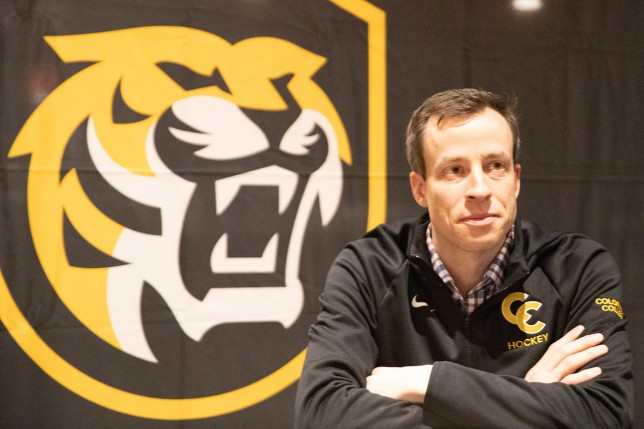 Also fueling interest is the hope that a new head coach, Kris Mayotte, and a totally revamped staff can re-create the success of one of the college hockey’s most historic programs and a team that routinely made trips to the NCAA tournament from 1995 to 2011. The 38-year-old Mayotte who was a goaltender at Union College subsequently had stops as an assistant at Providence (5 years) and Michigan (2 years) before accepting the Colorado College job. He’s assisted by former Denver University goaltender Peter Mannino and former Colorado College defenseman, Mark Stuart bringing a more defensive-minded attitude to the team.

In addition to a change in the coaching staff, the Tigers saw the departure of a number of key players from last year’s team. This included the pro-signing of top scorer Josiah Slavin and the transfer of team captain Grant Cruikshank to the University of Minnesota and second-leading scorer Ben Copeland to Penn State. Another regular, Troy Conzo transferred to Sacred Heart.

However, for those that have stayed, the transition has been seamless. On the change in the coaching staff, senior captain Bryan Yoon and sophomore forward Tyler Coffey did not see a difficult transition and commented on this during the team’s weekly radio show.

“The coaches did a good job of coming in and making a good impression. It was all about trusting the process and understanding it would be a different year with a clean slate,” said Yoon. “Last year, we didn’t have the year we wanted and I think a fresh start was good for everyone.”

“With a new staff, they came in and made a new relationship with every guy, and by the time I stepped on campus I felt there was a relationship there and the transition was pretty easy,” added Coffey.

Head coach Mayotte admitted during his weekly radio show that becoming a head coach is different than being an assistant. “It’s been a learning curve and it’s different in a fun way. As a head coach, what I’ve found is if our group is not prepared you take it a lot more personally and it keeps you up at night. I always believe if we do enough work during the week then we can be successful on the weekend no matter who we play. Our blueprint and our calling card right now are preparation, details, and work effort. We’re not thrilled with our results and our record right now but encouraged with how our guys have been playing and the attitude we are developing as a program. It’s been a great challenge.”

With two former goaltenders and a defenseman as coaches, there will be an emphasis on defense. “We have a number of young defensemen but coach (former NHLer Mark Stuart) has been a calming influence on the back end,” Said Bryan Yoon. ” (As a defenseman) we try to pick his brain, have good meetings and video and he really wants us to get better.  We’re not strictly a defensive team but we understand how important the defensive zone is.”

On the New Rink

Designed by JLG Architects, Ed Robson Arena was developed as part of Colorado Springs “City of Champions” initiative and the $52M 3,400 seat facility was completed in mid-September of 2021. Funding for the multi-purpose facility operated by Colorado College was made possible through a combination of public and private fundraising including a lead donor gift of $8M from Ed Robson, a Colorado College graduate, and former player.

“We are very thankful for everything World Arena did but having a rink on campus is something different,” said Yoon. “Seeing the student section wild and having fun and electric just makes it fun to play. If you look around, the seats are towering over us and it’s a different feeling than World Arena.”

Coffey agreed saying ” The fan support in general on campus is incredible. In this place, everything is on top of you and it’s great to have the students in the crowd. I see the students on campus and I’m grateful for them to come to the game and help support us. The buzz in the rink is coming from the student section.”

It’s been estimated that 20 percent of the slightly over 2,000 student population have been attending the games.

There have been mixed results in the Tiger’s first eight games but certainly some obvious signs of improvement for the team and a new attitude.

They currently stand with a 2-4-2 overall record and after going 0-2-2 in their first four games, they pulled off a 5-3 road upset of Boston College and were edged by Northeastern 1-0. They returned to Colorado and a home and home with local rival, Air Force Academy resulting in a disappointing 4-3 overtime loss and in the rematch blowing by the Falcons by a score of 8-1. The power play produced six goals, the most in a game by a Tiger squad since 2010.

“We got out of our structure on Friday and lost to Air Force but we have 8 guys that left the game (Saturday) feeling pretty good about their ability to score goals,” said Mayotte.

On Facing the Top-Ranked SCSU Huskies

The Tigers know it’ll be a challenge to play the Huskies who they have not defeated in Colorado Springs since 2013.

“We look at it as an opportunity for us to test ourselves and see what we really can do,” said Yoon. It’s conference play and we know they are a good team with basically the same team as last year.”

Mayotte was very complimentary of the Huskies. ” When you watch them play, they are a complete team. They are so consistent. They can do it any way you want it. They are skilled, fast, physical, can defend, and have a great power play and penalty kill. When you watch their lines their first and fourth lines look very similar. Their first pair and third pair of defensemen are very similar. They have a goalie back for the fifth year. They are experienced and they’ve been through it. You’re not going to rattle or shake them.”

“But, we are not spectators, ” Mayotte added. “We’re going to put together a game plan that we think can be successful and look to execute it. Our job is to win two games this weekend.”

In order to be successful, Mayotte’s three keys to the weekend are “Manage the puck, stay out of the penalty box and find a way to make it tough on the goaltender.”