Minneapolis, MN – I have a feeling first-year forward Mason Salquist is going to score a number of big goals for the SCSU Huskies over the next four years. But, for the time being, let’s let him relish his game-winning goal in the third period on Friday at Mariucci Arena. The gritty 5’9″ forward from Grand Forks, North Dakota scored in his second consecutive game to upend the fourth-ranked University of Minnesota Gophers 2-1 in a key non-conference road game.

But, none of this would have been possible without another outstanding performance in goal by fifth-year senior David Hrenak who repeatedly stonewalled the Gophers at crucial moments of the game to capture his fourth early season win and see his goals-against drop to a paltry 0.87 GAA and his save percentage at .960%.

The Gophers now have the unenviable task of making the trip to St. Cloud for the Saturday rematch on what should be a highly-charged home crowd celebrating homecoming weekend.

“I liked a lot of things we did tonight. I didn’t like the two turnovers for the two goals but that’s a good hockey team over there.”  Minnesota head coach Bob Motzko said. “We saw a lot of good things tonight, but it was a tough lesson.”

The Gophers, sporting 15 NHL draft choices, the most in college hockey, started off well in the contest outshooting the Huskies 9-4 in the first period and admittedly controlled more real estate. Their best opportunity came eleven minutes into the period and was created by a turnover when senior defenseman Nick Perbix fell along the wall. Gophers forward Ben Meyers scooped up the puck breaking in all alone on Hrenak and attempted a forehand backhand move but Hrenak poked the puck away to keep the Gophers off the board.

But, it was a turnover five minutes later by the Gophers that gave the Huskies a similar opportunity. Junior Jackson Lacombe, perhaps the Gophers top defenseman, lost control of the puck at the Huskies blue line and an alert Jami Krannila jumped on it and raced down the ice and slid the puck five-hole under the Gophers Jack LaFontaine for a 1-0 lead.

The Gophers outshot the Huskies 9-4 in the period but it was the Huskies who capitalized on a turnover and carried a 1-0 lead into period two. 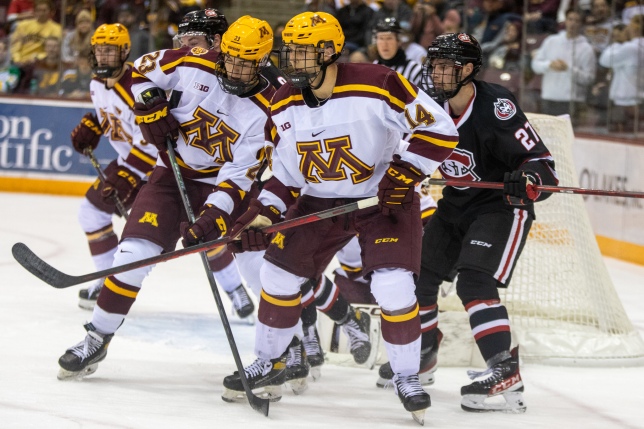 There was a big shift in the momentum of the game in period two with the Huskies gaining more puck control and outshooting the Gophers 6-0 in the first eight minutes of the period. The Huskies had the Gophers out of sorts and had extended time in the offensive zone seven minutes into the period with Kyler Kupka fanning on the puck with an open net in the low right slot.

A hit on Grant Cruikshank along the boards by Josh Luedtke eight minutes into the period created a group-shoving match and was a further indication of the emotion of the game. A Brodzinski penalty for boarding at 11:55 derailed the SCSU pressure but the Huskies killed the Gopher’s second man-advantage of the game to maintain the one-goal lead.

The Huskies were back on the attack and had another opportunity with  Zach Okabe nearly burying a wraparound with five minutes remaining in an attempt to ratchet the lead to two goals. The period ended with a clear advantage to SCSU outshooting the Gophers 12 to 4 and holding on to a 1-0 lead. 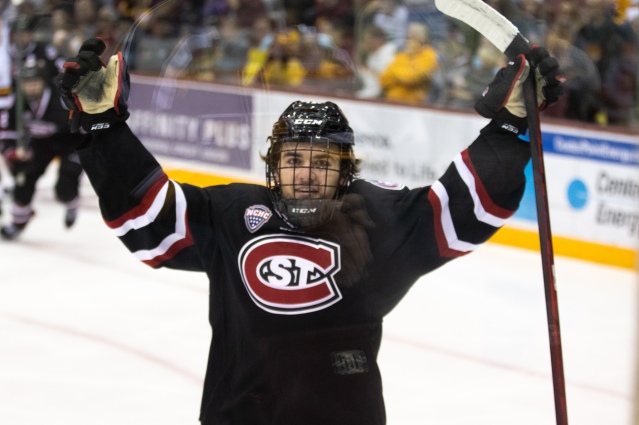 The Gophers finally found a way to beat Hrenak but again, it was the result of a turnover at the Huskies’ blue line six minutes into the period. Micah Miller couldn’t force the puck along the wall over the blue line and Matthew Knies captured it and tossed the puck across the goalmouth where fellow freshman Chaz Lucius chopped the puck at Hrenak. Hrenak initially made the save but it bounced over his left shoulder and into the goal to tie the game at 1-1.

However, three minutes later, the Huskies responded quickly to again take a one-goal lead. An errant pass by the Gophers in the Huskies zone had SCSU charging in the other direction. Jack Peart shuttled a pass to Joey Molenaar who carried the puck in wide and placed a backhand shot on LaFontaine. He made the save but Mason Salquist followed the play and punched it past LaFontaine to give the Huskies a 2-1 lead.

A penalty for hooking to Seamus Donohue with 5:42 remaining had the Gophers back on the power play, their third of the game but they only yielded one shot on goal.

The Huskies were content to keep chipping the puck out of the defensive zone to kill time and the Gophers ultimately pulled LaFontaine with 1:39 remaining for the extra attacker. The Gophers ramped up the pressure and the Gopher’s Mike Koster missed an open net from the right goalmouth as time ran out.

In contrast to period two, the Gopher’s outshot the Huskies 10-2 in the period and 23-18 for the game. In another strong outing, David Hrenak turned aside 22 of 23 shots on goal to see his record improve to 4-1-0. UMN’s Jack LaFontaine stopped 16 of 18 shots in the loss. Faceoffs favored the Gophers by a wide margin winning 29 of 47 for a winning percentage of 61.7%.

In a game with few penalties, the Huskies were 0 for 1 on the man-advantage while the Gophers were unsuccessful on all three of their power plays.

The teams finish the weekend series on Saturday in St. Cloud at the Herb Brooks National Hockey Center with a 5:07 puck drop.