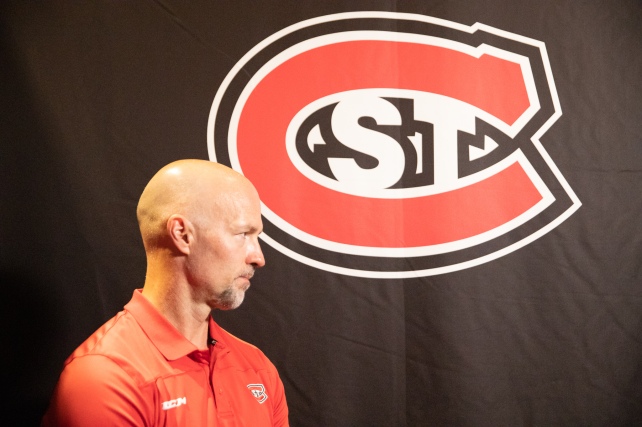 St. Cloud, MN – Following the Huskies 5-0 loss to the University of Massachusetts in the national championship game in April, the always level-headed Brett Larson told his team, “We were proud of them, and we love them. We told them they’re a great group of guys. They’ve stuck through a lot this year. Nothing you really say, I guess, sinks in. But to think about what they did, to go farther than any team in our program’s history and just to get to this game in a year when not many people expected it other than the guys in that room.”

In a nutshell, that describes the season. Predicted to finish fourth in the NCHC without much thought of a national title, the team went about its business leaning heavily on strong team culture, work ethic, and staying healthy. Battling through the pandemic, a disjointed season, and a schedule with hollow arenas, the Huskies persevered and advanced to the NCAA Championship game in Pittsburgh. It was not the most wins in a season but the deepest the program has gone in the NCAA tournament in its 34 years of Division I play.

Things fell into place for the Huskies who utilized a combination of veteran players, good goaltending, and the impact of the forward line of Veeti Miettinen, Jami Krannila, and Zach Okabe to push enough offense to win key games and finish second in the NCHC. Despite being edged 5-3 by the UND Fighting Hawks in the Frozen Faceoff, the Huskies roared back to sweep Boston powerhouses Boston University and Boston College in the Northeast Regional and in-state rival Mankato in a nailbiter in the Frozen Four semi-finals to reach the championship game.

So, for the Huskies, it’s a matter of clearing that last hurdle to win their first national title. The expectations will be high and this season the Huskies will be the hunted as opposed to being the hunter. The tests will be early and often as the team faces three NCAA tournament teams (University of Minnesota, Minnesota State Mankato, University of Wisconsin) in the first month of play. By the time they reach January 1st, eleven of the team’s seventeen games will have been against NCAA tournament teams.

So, what are the odds of the runner-up in the NCAA championship game returning to capture the title the following season? Since 1948 it has happened eleven times in roughly seventy games.

The 2020-21 national runner-up Huskies have the luxury of minimal departures from last season. They did see the departure of blue-collar players Will Hammer and Jared Cockrell (both of whom would have been 26 this season) who were part of a highly successful checking line and provided respite for the top three lines. Otherwise, the entire team is back sans defenseman, Tyler Anderson who logged 15 games and is pursuing medical school at the University of Manitoba. Team additions outweigh the departures and that’s what gives a great deal of optimism for the 2021-22 season.

” I think there’s going to be a hunger going through that experience and getting that taste and being that close,” said head coach Brett Larson. “But, you have to flip the switch and say it’s a new challenge and a new year and not everything is going to be the same. Now, we focus on a new challenge.”

“Our team is very hungry and we want to win'” said team captain Spencer Meier. “We went far and made a great run and are proud of it but we want to win. We want to win the NCHC, the Frozen Faceoff, and the ultimate goal is to win that national championship.”

At forward, the team returns a whole lot of experience with six seniors and five juniors. They return the top eight goal scorers and point producers including the aforementioned linemates Miettinen, Krannila, and Okabe who produced a combined 28 goals and 69 points. Also returning is senior Nolan Walker who had a breakout year on offense with 10 goals and 14 assists for 24 points. Easton Brodzinski finished the season as the team’s top goal-scorer with 13 goals but sustained a fractured femur in the Boston College semi-final and although currently skating his return to competition is unknown.

“It’s kind of week to week with Easton'” noted  Larson. “So far it’s been pretty good and he’s on track. We’ll get him back at some point early in the season. We don’t know when that is but we’re optimistic that it will be earlier than later.”

Fifth-year senior forward Kevin Fitzgerald decided to return and he’s a key component of the offense and special teams. “More than anything, the guys just wanted to be together again. We didn’t have to give them a sell job about returning'” said Larson.

Seniors Micah Miller and Minnesota Wild draft choice Sam Hentges and juniors Chase Brand and Kyler Kupka are others that will be key contributors and are expected to bury the puck more this season. Joe Molenaar, Thomas Rocco, Jack Johnston, and newcomers Mason Salquist, Robert Morris transfer Aiden Spellacy and Ryan Rosborough will be vying for ice time as well.

The Huskies finished last season ranked 14th in goal scoring averaging 3.37 goals per game. Expect improvement there this season. The same goes for the power play which was a strong 22.6% and 13th in the country.

The defense is deep and talented and led by senior captain Spencer Meier and NCHC preseason all-league team pick and senior Nick Perbix. Perbix had a breakout season in 2020-21 posting 7 goals and 16 assists and was plus-eight. Seamus Donohue, a fifth-year senior, was a Michigan Tech transfer, meshed well with Perbix, and logged a ton of minutes. Luke Jaycox, Brendan Bushy, Ondrej Trejbil, and Brady Ziemer are all experienced veterans that bolster the strength of a defensive unit that finished the season +41 last year. Newcomers include two-year USHL veteran Josh Luedtke and Minnesota Wild draft choice Jack Peart. Both are puck movers and will change the dynamics and personality of this defense.

“We are loaded on the blue line and that is a good problem,” said Larson. “We have to handle it the right way because there’s going to be a couple of really good hockey players that aren’t in the lineup on a given night. Competition is a great thing and the guys will push each other. It is a real solid group and we really like them.”

Meier concurred saying “I think it’s good for a team to have healthy competition. Up and down the line at forward, defense and goaltending there is competition. All the guys are battling every day.”

The penalty kill had an 83.2% success rate (17th) and should improve as well.

Goaltending continues to be a strength with veterans David Hrenak, Jaxon Castor, and Joey Lamoreaux all returning. Hrenak returns for his fifth season and his career includes 115 games, 2.44 GAA, .908 SV%, and 11 shutouts. Backups Castor and Lamoreaux could be starters on many other teams but only saw action in seven games last season.

“In goal, we know those three guys will push each other,” said Larson. “They all know it’s going to be challenging. They are all good goalies and they have to push each other. They all decided they wanted to come back for that fight and I like that. David is not taking anything for granted and knows those guys are coming to push him.”

“That schedule sounded great when we first put it together,” said Larson. “I was thinking about the fans but now we have to win some of those games. It’s good to have a challenge but it’s going to be fun”.

“Last year was last year, ” said Spencer Meier. “It was a great experience but our guys know it’s a long road to get back there and we’re just going to take it one day at a time. Now, we are ready to take that next step and hopefully finish the job this year.”

For SCSU hockey that means clearing the final hurdle.