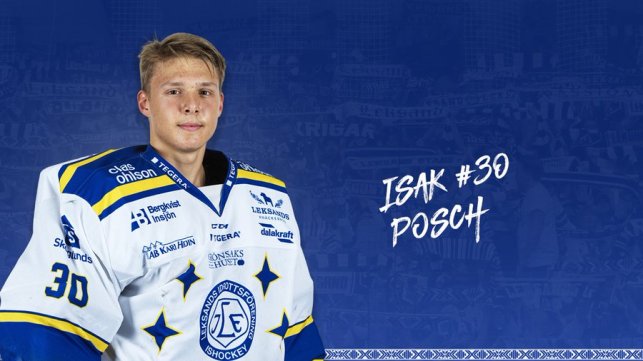 St. Cloud, MN – It’s been twenty years since the St. Cloud State University Huskies have had a Swede on their roster. It’s been twenty-five seasons since they rostered a goaltender from Sweden. It looks like the drought is over with a commitment from a goaltender, Isak Posch, a native of Umea, Sweden located on the beautiful northeast coast of the country.

Posch, a 19-year-old 6′ 2″ 198-pound left-catching goaltender was selected as the second pick in the first round of the United States Hockey League (USHL) Phase II Draft on May 27th by the Sioux Falls Stampede. This was the highest a Swedish goaltender has ever been taken in the USHL. The Huskies coaching staff is unable to comment on this commit however, in their press release, Sioux Falls head coach Marty Murray noted  “Posch is a goaltender that we followed closely throughout the season and we really liked what we saw. We look forward to Isak coming in and being a major contributor to our team.”

Story: The goalkeeper talent is second in the draft – leaves Leksand (use Translate) 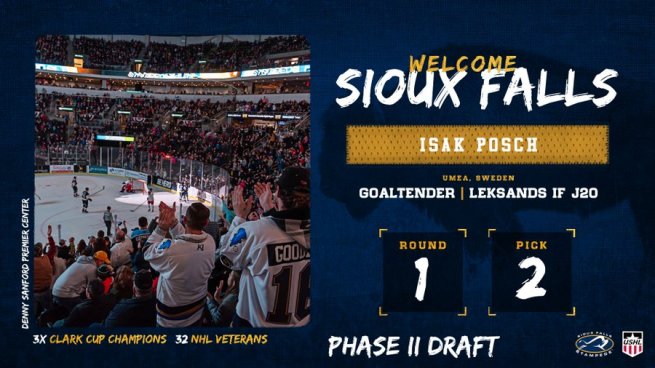 For the past two decades, Sweden has been fertile ground for goaltenders with no less than two Swedish goaltenders having been selected each year in the NHL Entry Draft since 2004. Foremost, Henrik Lundqvist logged 887 games in a highly successful NHL career. In the 2020 draft, Calle Clang was drafted by the Pittsburgh Penguins, and incoming Merrimack College freshman, Hugo Ollas was drafted by the New York Rangers. For the 2021 Draft taking place on July 23-24, it is expected that Swede Jesper Wallstedt will be the first goaltender selected and certainly will be a top ten pick in the first round.

In a pandemic shortened season in Sweden, Posch split time between Karlskrona HK of the Hockeyettan League playing two games with a 3.36 GAA and .889 goals against and with Leksands IF J20 in the J20 National League, the top junior league in Sweden. There, Posch played nine games posting an 8-1-0 record, 2.42 goals against, and a .930 save percentage good for second in the Norra Division. In 2019-20 Posch split time between the Leksands J18 and J20 teams and his numbers placed him on top of the Norra Division statistics compiling a 1.72 goals against and .930  save percentage in 13 games besting the numbers of both Jesper Wallstedt (2.53/.923) and Calle Clang (2.64/.913).

Fitting the prototype of all the quality goaltenders coming out of Sweden these days the 6′ 2″ 198 pound Posch has the size but also the quick reflexes to go along with his physical attributes. He plays the angles well and has a good and quick blocker and glove hand. Posch was on the radar of a few lists for the 2020 NHL Draft but ultimately went unselected.

Goaltenders From Sweden in Collegiate Hockey

There’s been a renascence in the recruitment of goalies from Sweden in collegiate hockey. The surge in interest has been spurred by a great deal of quality training and the organization and structure of Swedish youth hockey. With close ties to the Swedish professional teams, the development of goaltender training over the past decade has been incredibly successful and it’s been paying off.

Since the 1995-96 season, there have been 17 goaltenders from Sweden in NCAA hockey. However, in the past three seasons, there have been ten Swedes who have competed for US collegiate teams including Filip Larsson and Magnus Chrona (Denver), Zackarias Skog (AIC), Erik Portillo (Michigan), Victor Ostman (Maine), Emil Zetterquist (St. Lawrence) and Anton Martinsson (Alaska Fairbanks/Providence). 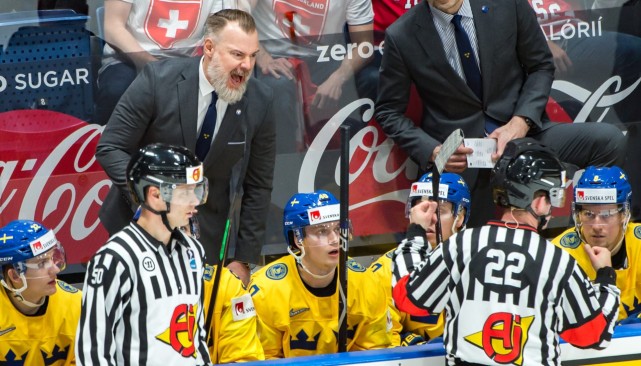 Although the numbers have not been large, the Huskies have had some prominent Swedes in their program over the years.

The most prominent is Rikard Gronborg who skated as a forward and defenseman for the Huskies from 1989 to 1992 and then as an assistant coach during the 1994-95 season. He has since spent the past twenty years as a professional scout, NCAA coach, junior hockey coach, and assistant and head coach at the professional level. He has coached Team Sweden in international tournaments and at the Olympic level and most recently for the past three seasons has coached professionally in Switzerland. In 2020-21 he was coach of the ZSC Lions in the Swiss Hockey League and was the head coach on a team with former SCSU Husky standouts Ryan Lasch and Garrett Roe. His name is constantly being tossed around as a candidate to coach in the National Hockey League.

In 1995-96 goaltender Petter Gumaelius was on the Huskies roster and he went on to play professional hockey in Sweden for 11 seasons.

Sacha Molin was a tremendous power forward for the Huskies during their Division I formative years from 1995-1998. A highly productive offensive performer, he netted 47 goals and added 55 assists for 102 points in just three seasons of play. A highly physical player, the 6’2″ 200 pound forward incurred 197 penalty minutes in his three seasons. He went on to play professional hockey in the United States in the International Hockey League, the United Hockey League, the West Coast Hockey League, and in Norway and Sweden.

Finally, Peter Torsson was the last Swede to play for the Huskies from 1997 to 2001. Plagued by knee injuries he only played in 69 games netting 11 goals and 15 assists for 26 points. An excellent student, he graduated Summa Cum Laude and was an academic all-American.  After a stint as an assistant coach for the Huskies in 2012-13, Torsson entered the financial industry. He serves as a family advisor for NHL and D-1 prospects and is currently advising over 40 players across Division 1 college hockey, Canada Major Junior, BCHL, NAHL, USHL, and various prep schools.  Kaizen Sports International, Inc., a Canadian-based Player Development Agency, has recently named Peter their Senior Vice President, USA. Torsson also is heavily involved with the California Bears Youth Hockey and as General Manager and coach has led teams to 18 league championship finals.

Currently, the Huskies have great depth at goaltender with the return of senior goaltender David Hrenak ( Povazska Bystrica, Slovakia) and sophomores Joey Lamoreaux (Shorewood, WI) and Jaxon Castor (Phoenix, AZ). Posch looks to join the Sioux Falls Stampede of the USHL for the 2021-22 season and most likely the Huskies for the 2022-23 season.