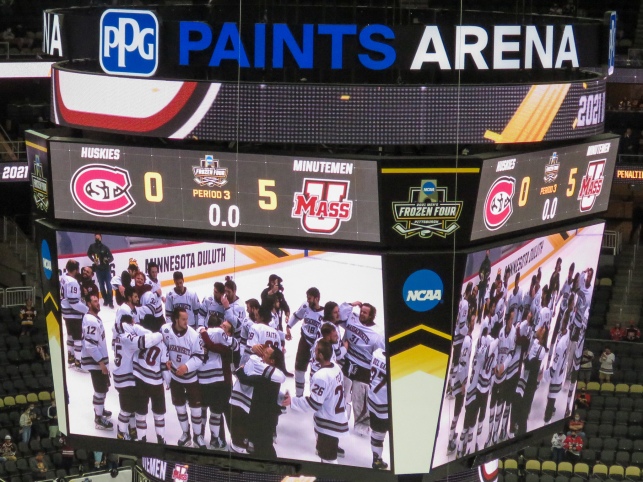 Pittsburgh, PA – All it took was a goal by defenseman Aaron Bohlinger at 7:26 of period one to dispatch the SCSU Huskies in the championship game of the Frozen Four at the PPG Arena in Pittsburgh on Saturday, April 10th. They added four more before the end of regulation but it was the first one that was all that was needed for the University of Massachusetts to capture their first NCAA title in school history by a 5-0 score.

It was not a typical SCSU game. The passing was off, they had difficulty managing the puck and players were losing their edge more than normal. Obviously, there were some issues with the ice. They were having trouble maintaining any flow in their game.  Mistakes were costly for the Huskies who allowed a power-play goal, a short-handed goal, a goal off a turnover, and another off an inattentive line change as the Minutemen buried five of 22 shots in the lopsided win.

“We thought we had a good first period, ” said head coach Brett Larson in the post-game press conference.  ‘You wouldn’t know it by the score, but we controlled the territory. Our main goal was to make them defend as much as possible. We thought we got a lot of o-zone early, and then unfortunately we have a player blow an edge and take another player out and they get a 2 on 0.”

“All of a sudden you’re down 1-0 even though you really liked the start,” said Larson. “They get a late goal in the period on a wrap-around play and I felt like we started pressing a little bit too early. Once they got up, they went into a pretty structured 1-3-1 in the neutral zone and took away the middle. We were forced to wrap pucks and try to seal it and come up with possession that way. I thought they ran it well once they got the lead.”

“I think we were just gripping it a little tight and weren’t able to quite execute plays when we got the puck early. We had the jump. We had the work. But we were just a little tight and forcing things. I think that you could see UMass had been through it. Maybe they had a little bit more of a maturity level for having gone through it. I know our guys are going to use this as fuel to get back here. And use this experience once we’re here again to be better.”

Sophomore forward Zach Okabe had a good night. He was active with eight shots on goal but couldn’t solve UMass goaltender Filip Lindberg. “Obviously we’re not happy. But, it’s good for the program. It’s good for the school. They just won the stick battles in front and boxed out pretty well and it just wasn’t our night tonight.”

Period One
The Huskies charged out early and were chewing up the Minutemen for the first four minutes. Forward Veeti Miettinen placed a hard wrist shot off the crossbar a minute and a half into the period and a heavy forecheck seemed to have the Huskies controlling play. But, an alert play by defenseman, Ty Farmer sent a quick pass to

Aaron Bohlinger sending him up ice as Huskies defenseman Seamus Donohue tripped over a teammate. It created a two-on-zero with Bohlinger and Nolan Sullivan and Bohlinger beat an outmanned Hrenak for a 1-0 UMass lead.

The Huskies only had one shot on goal midway through the period before Nick Perbix crashed the goal dumping Lindberg and overturning the net but Lindberg was able to keep the puck out of the goal.

The ice began to tilt in favor of the Minutemen and they added another at 18:56 as the Huskies were attempting to run out the period. Unable to clear the SCSU zone after two attempts Cal Kiefiuk circled behind the SCSU goal for a wraparound and sent the puck through the crease where Reed Lebster buried it in traffic for a 2-0 UMass lead.
Umass was defending well and limited SCSU to three shots on goal outshooting them 7-3.

The teams traded tripping penalties and with Nolan Sullivan in the penalty box at 3:57, the Minutemen added a short-handed goal for a 3-0 lead. A turnover in the UMass zone had Philip Lagunov headed in the other direction. Lagunov dangled the puck past defenseman Nick Perbix and then did a forehand backhand move with the puck trickling under Hrenak for the three-goal advantage.

Another mistake cost the Huskies dearly after they were whistled for too many men on the ice at 12:35. A minute and ten seconds later Matthew Kessel blew a shot past Hrenak stick side through traffic for a 4-0 lead. This was the only shot on the man advantage and the fourth to get by Hrenak after just 13 shots on goal.

The Huskies outshot the Minutemen 12-6 in the period but UMass was clearly in control of the game. 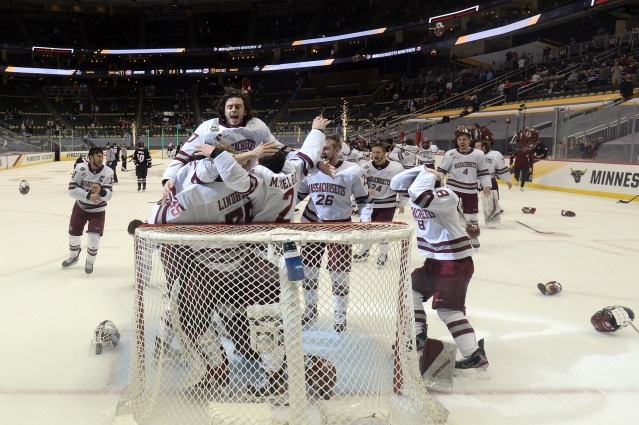 Period Three
Hrenak was called on to make a big goalmouth save four minutes into the period but less than two minutes later was hung out to dry at 6:00 when an inattentive line change had Bobby Trivigno all alone at the Huskies blue line capturing a puck from Reed Lebster. Trivigno trolled in on Hrenak and beat him low stick-side with a wrist shot from the left dot. This increased the lead to 5-0 and capped the scoring for the game.

It was reflective of the game that Zach Okabe had a breakaway on Lindberg with 10 seconds remaining in the game and he pushed it over the net marking the last attempted shot on goal for the Huskies this season.

It was a game where the Huskies couldn’t catch a break and it seemed every mistake was capitalized on by the Minutemen.

For the game, the Huskies outshot UMass 25-22. Minutemen goaltender Filip Lindberg was hardly tested as he stopped all 25 shots on goal.  It was a tough night for David Hrenak as he allowed 5 goals on 25 shots (.80 s%).

The shot chart showed 53 shots attempted by SCSU but only six shots being fired from the low to the mid-slot area.  Faceoff wins were in favor of UMass 27-26.

The Huskies finish their most successful season ever with a record of 20-11-0.

“The number one thing we told them was we were really proud of them and we love them,” said coach Brett Larson.”They’re a great group of guys. They’ve stuck through a lot this year. Nothing you really say, I guess, sinks in. But to think about what they did and to go farther than any team in our program’s history and just to get to this game in a year when not many people expected it, other than the guys in that room.”