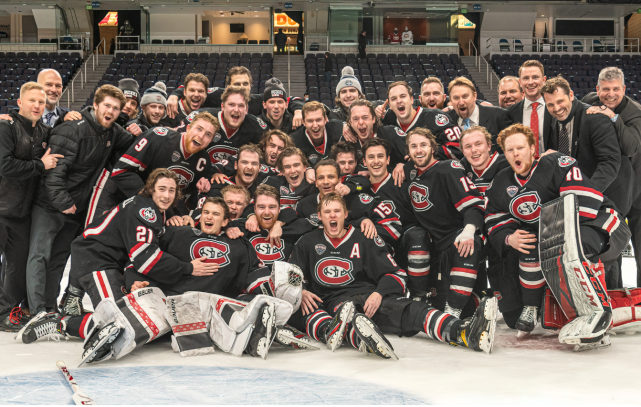 Albany, NY – The St. Cloud State Huskies rallied from a 1-0 first period deficit with three second period goals en route to a 4-1 win over #1 seed Boston College in the Northeast Regional Championship in Albany, NY on Sunday, March 28. It was another impressive win over a Boston team loaded with NHL draft choices and in the process earned their second trip to the Frozen Four on April 8-10 in Pittsburgh, PA. 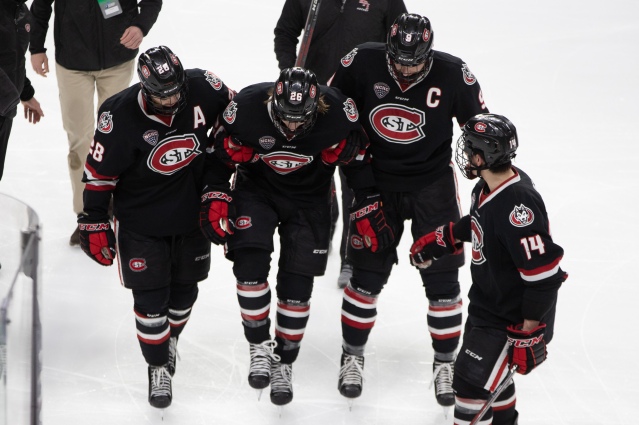 However, there was a casualty in this game as the team’s top goal scorer, Easton Brodzinski was lost for the balance of the season with an injury to the right leg a mere 40 seconds into the second period after a collision with the Eagles Marc McLaughlin while cutting across the ice inside the Eagles zone. It was confirmed by his father he sustained a fractured femur, underwent surgery and would be on crutches for four weeks before he begins rehabilitation.

Alternate captain Luke Jaycox who scored a goal in the game commented ” It’s tough losing Brodzy as he’s a big part of our team and a brother but we still had a goal to achieve and it caused us to work a little harder not only for the team but for Brodzy too and keep battling the way we did.”

Get it done they did as his teammates rallied for three unanswered goals in period two following the injury to take a commanding 3-1 lead entering the final period. “It was a great game against a great program and we feel very fortunate to be walking out of here and heading to the Frozen Four,” said Larson.

The Huskies strategy to shut down the potent Eagles was not a new tactic said Larson . “It was our normal 1-2-2 to try to slow them down. We couldn’t allow the game to turn into a track meet. We did what we normally do but just did it better,” he said with a smile.

In the offensive zone “We were trying to get bodies to the area and try to create some scrums around the net. We tried to create rebounds and tips and try to throw the puck through a group of players where he (BC goalie Spencer Knight) couldn’t see it. Hammer’s goal was a prime example of that. I thought our tenacity and winning puck battles was a huge part of our game tonight.”

He was also pleased with the play of David Hrenak who stopped 26 of 27 shots and in the win. He also ended up with a 96.5% save percentage in two games and was named the Northeast Regional Most Outstanding Player. ” I thought David saved his best hockey of the year for right now and we’re hoping he can keep building off it. I thought he looked comfortable and he didn’t get rattled. He looked confident ad he looked solid.”

It was a tactical game from the start with the Huskies dumping the puck into the Eagles zone often in an attempt to keep them chasing the puck. the Eagles on the other hand were trying to use their speed and skill to penetrate the Huskies blueline with varying success in period one.

The Huskies Seamus Donohue was whistled for goaltender interference at 10:58 but the Huskies penalty kill was able to hold off the Eagles who were moving the puck well on the man-advantage.

They ultimately scored first at 14:23 with Minnesota Wild draft choice Matt Boldy winning a battle along the right wall and coming away with the puck and carrying it to the goalmouth where he slid it under Hrenak for a 1-0 Eagles lead.

The Huskies nearly scored off a scramble in front of the Eagles goal with several shots saved by Knight to preserve the 1-0 lead. Each team traded 11 shots on goal in the period. 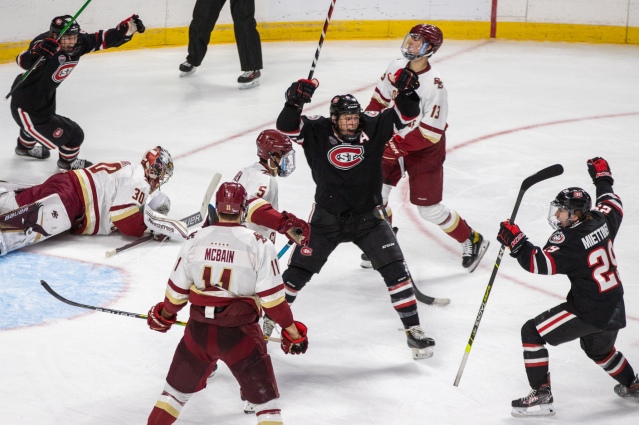 Forty seconds into the period Brodzinski was helped off the ice with a right leg injury but it seemed to give the team more resolve. SCSU began to apply a great deal of pressure in the Eagles defensive zone causing them to take a timeout at 6:04 into the period.

Three minutes later, the Huskies were on the board with Luke Jaycox’s (Okabe, Krannila) first goal of the season.  However, it was Zach Okabe who started it off capturing the puck off the back wall and carrying it along the wall towards the blue line and then turning and sending a shot on goal. The rebound ended up on a pinching Luke Jaycox’s stick and he beat Knight with a quick shot to tie the score at 1-1.

After a fairly ineffective power-play opportunity at 9:49,  the Huskies added another goal at 15:15 on a blue-collar effort by senior forward Will Hammer. In the midst of a net-front scramble with four Huskies in the vicinity Nick Perbix placed a shot on goal and a determined effort by Hammer finally punched the puck by Knight for the Huskies first lead of the game at 2-1.

At the tail-end of the period, the Huskies added another crazy goal by Nolan Walker who was involved in several over the weekend. Using his speed, Walker charged around the outside and bee-lined towards the net with BC defenseman, Marshall Warren draped over his back. Walker powered the puck past Knight and was immediately whistled for charging the goaltender. However, a review of the play showed the puck got by Knight prior to the infraction and it was determined to be a goal for a two-goal SCSU advantage. Nick Perbix picked up his second assist of the game on the play.

It was a dominant period for the Huskies outshooting the Eagles 20-7 and scoring three goals. 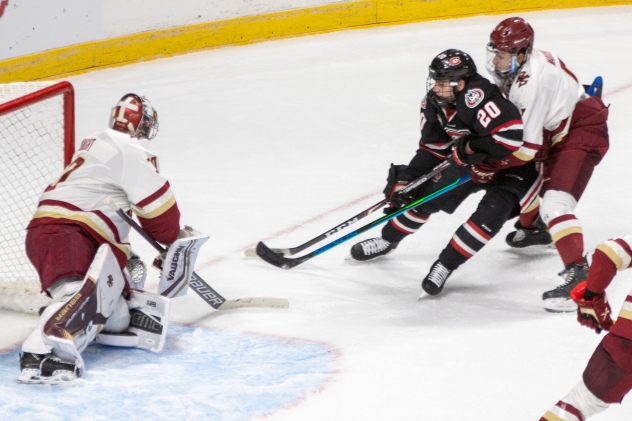 The Huskies strategy in period three was quite simple.  Clog up the neutral zone so the Eagles had to dump the puck and if the Huskies got possession clear the puck out of the zone even if it meant icing the puck. The strategy worked to perfection, causing numerous turnovers and frustration on the part of the Eagles who at times had difficulty getting the puck out of their zone. It was perhaps the best defensive effort through tenacity and winning puck battles that the Huskies accomplished all season.

The Eagles resorted to pulling Knight for an extra attacker with 2:34 remaining and despite getting some quality shots on Hrenak, Micah Miller (Brendan Bushy) sealed things with an empty-net goal at 19:15 for the 4-1 final.

The Eagles outshot the Huskies 9-5 in the period but SCSU outshot BC 36-27 for the game. Nolan Walker was the only Husky on the plus side winning 10 of 19 faceoffs.  The Eagles edged the Huskies 32-30 in the faceoff circle and in blocking shots 16-7.

David Hrenak had an outstanding game turning aside 26 of 27 shots on goal while Spencer Knight stopped 32 of 26 shots. Both teams were scoreless n the power play – SCSU 0 for 1 and Boston College 0 for 2.

Nick Perbix had the only multi-point game with two assists. 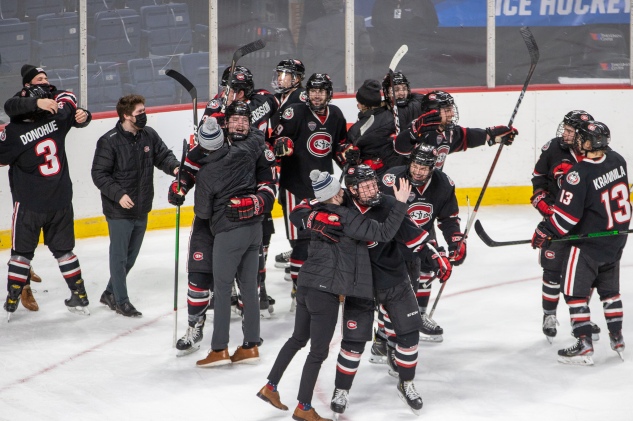