St. Cloud, MN – Following a difficult three-game series against the #1-ranked University of Minnesota, the Huskies return to action with a two-game series vs Bemidji State University at the Herb Brooks National Hockey Center.

The Huskies dropped all three games to the Gophers despite putting a scare into them in a 2-1 loss at Ridder Arena last Thursday. This happened to be the teams 100th all-time game and the Huskies had a 1-0 advantage heading into the final period Thursday.

“There are lots of things to feel good about from some of our play on the weekend but still it’s not good enough,” said head coach Steve Macdonald. “There’s a lot of areas that we want to be able to clean up in order to put ourselves in a better position over the course of those three games. I didn’t like our start on Saturday and Sunday and that showed on the scoresheet. I thought our compete level was good at times but against the top team in the country you can’t be taking a lot of minutes off.”

The power play was perfect at 8 for 8 and they scored the first power-play goal on the Gophers this season. “We are very pleased with our special team’s performance,” said Macdonald. We won the special teams battle and that’s a small victory that we can take. Our penalty kill has been a very encouraging part for us and will pay dividends down the road. On the power play, we’re working on a few pieces but think we are close to breaking through.”

The Huskies played an unusual three-game Thursday/Saturday/Sunday series with the Gophers last week. In the series opener, a strong first two periods had the Huskies with a 1-0 lead heading into the final period off a power-play goal by Olivia Cvar. However, two goals in the third period by the Gopher’s leading goal scorer, Grace Zumwinkle earned them the comeback win. The game featured the first power-play goal vs the Gophers by any team this season and a 40 save performance by the Huskies goaltender Emma Polusny.

On Saturday, again at Ridder Arena, the Gophers piled on four goals in period one and the Huskies never recovered in the 4-1 final. Laura Kluge scored the lone goal for the Huskies in period two.

In the series finale, on January 10th, a goal 33 seconds into the contest set the tone for the game as Taylor Heise netted a hat trick in the Gophers 4-0 shutout of the Huskies. Sanni Ahola stopped 33 of 37 shots in the loss.

The Beavers were swept at home by the Minnesota State Mavericks by 2-1 and 4-0 scores. A two-goal third period by the Mavericks did in the Beavers who were outshot 41-19. The Mavericks repeated the result in the finale outscoring the hosts 4-0 over the final two periods and outshooting the Beavers 27-23.

This will be the 98th and 99th all-time meetings between the teams. Bemidji State holds a 48-40-9 advantage and the series is tied at 21-21-5 at the Herb Brooks National Hockey Center. Bemidji has a 3-2-0 edge in the last five contests.

Bemidji State is led offensively by Clair DeGeorge who has totaled seven points in eight games (3g-4a) to tie for eighth in the league in scoring. She is followed by sophomore Reece Hunt who has posted six points (6a) in eight games and is second in the league in assists. Senior defenseman Tina Kampa follows Hunt with four assists this season, leading the Beavers’ blueline and is tied for 10th-most in the league. She is tied for sixth in the league in defenseman scoring (0g-4a). Junior Elie Moser has added three goals this season to tie for the team lead with DeGeorge. Senior Mak Langei paces the WCHA and the nation with 36 blocked shots while Kampa follows closely with 25 to rank third in the league and fourth in Division I. Bemidji State is led in the net by senior Kerigan Dowhy who has posted a 1-6-1 record and ranks sixth and seventh in the WCHA with a 2.82 goals against average and .911 save percentage, respectively. 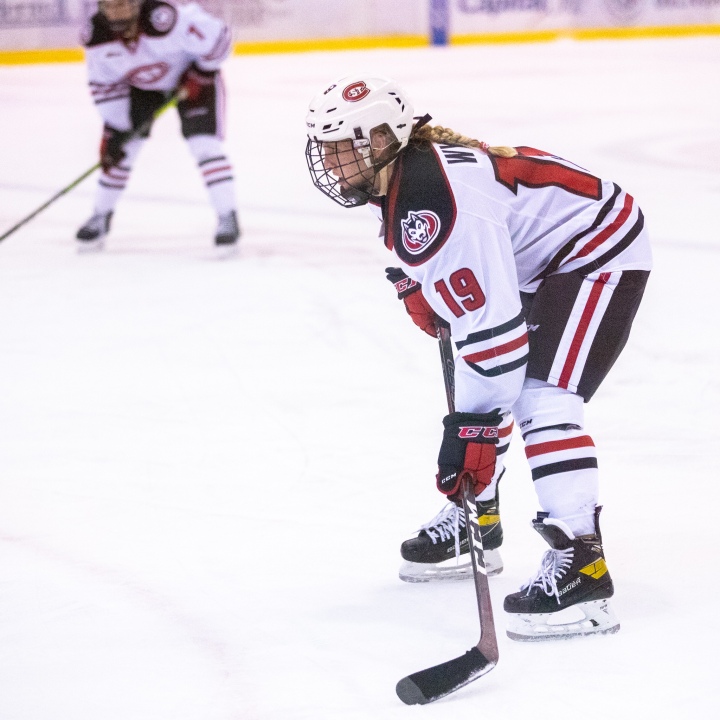 On special teams, the power play needs work as they are 1 for 25. The penalty kill, however, has been very strong killing 26 of 27  opportunities for a 96.3% success rate.

The Huskies do have some firepower upfront with a number of players that just need to get untracked. Through nine games, junior forward, Jennina Nyland leads the squad with 3 goals and 3 assist for 6 points and 28 shots on goal. Freshman, Emma Gentry, an impact first-year player has 2 goals and 1 assist for three points in six games. Sophomores, Klara Hymlarova, Olivia Cvar and Taylor Lind can also bury the puck. Senior Laura Kluge had the one goal and one assist but can add offense and needs to place the puck on the net more often.

The defense is led by seniors Kenzie Wylie and Hannah Bates and junior Olivia Hanson who have played well on the defensive side of things.

This should be a closely matched series with two teams attempting to get some traction in the win column. Both squads are at the bottom of the conference in offense and defense despite reasonably good goaltending for both teams.

“Bemidji will be a lot tighter in their team systems (than the first series) and are a team that relies on very tight team structure so we expect them to be dialed in on their part,” said head coach Macdonald. “For us, it comes down to decisions on what we’re able to do with what they provide us and what we create for ourselves. They are traditionally a good defensive team and don’t give you a lot. When they give you opportunities you have to capitalize. We expect a tight and hard-fought game.”

As far as goaltending Macdonald commented “We are happy where both are at. For Sanni, to get minutes against the top team in the country we’re happy for her.”

Concerning the lines, Macdonald admitted “As a coaching staff, we’re always tinkering. We continue to play around with the lines. There are certain pieces we’re comfortable with but it’s just a matter of finding that extra little piece. It’s always a fun conversation during the week. The trick is not tinkering with it too much.”

On their approach to playing Bemidji captain, Kenzie Wylie commented ” We need to go hard on every puck and take away their time and space because they are a quick team. We had a slow start against Minnesota and we have to focus on the little things. We need to focus on what we do best and make sure we come out with a quick start. We want to win our battles and win our races to the puck and be aggressive right from the start.”