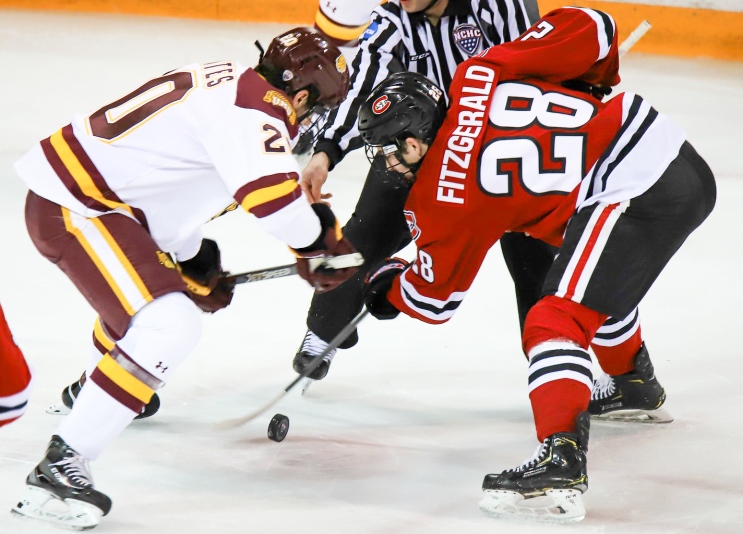 Duluth, MN – Kevin Fitzgerald scored a third-period goal to complete a 4-3 comeback win for the Huskies on Friday, January 8th at Amsoil Arena in Duluth, MN. In a tale of three periods, each team dominated a period before sending it to the deciding third period. The win earned the Huskies three league points further solidifying their hold on first place by five points over the Bulldogs and North Dakota who have two games in hand.

Period One
The Huskies had a strong start to the game showing no issues adjusting to the smaller ice sheet and opened up an early lead on a goal by Jami Kranilla (Meier, Miettinen) 5:33 into the opening session with his 4th goal of the season. Spencer Meier, who had a particularly strong game, sent a shot from the blue line towards the UMD net and Kranilla tipped it over Ryan Fanti’s glove side for the 1-0 lead.

A goal so nice that they faked out @CangyManMSG!! What a goal! @SCSUHUSKIES_MH jumps out to the early 1-0 lead on the road. pic.twitter.com/IZiLVWr30d

UMD began to find their legs requiring SCSU goaltender David Hrenak to make two successive saves before UMD Matt Cairns was whistled for cross-checking at 13:21. However, the Huskies got sloppy and yielded a short-handed opportunity to Cole Koepke who was thwarted on a one on one with Hrenak to preserve the lead.

The Huskies scored again late in the period off an offensive zone faceoff. Sophomore forward Chase Brand (Walker) scored with 47 seconds remaining for his first goal of the season. Off the draw, Brand captured the puck and skated across the top of the right circle, and beat Franti with a wrist shot from the high slot for a 2-0 SCSU advantage.

OFF THE DRAW!!! @SCSUHUSKIES_MH doubles its lead in the final minute of the first period. pic.twitter.com/gRNaOBVFMF

In a tightly contested period, UMD outshot the Huskies 6-4 but SCSU held the two-goal lead.

Period Two
A disastrous second period saw the Bulldogs come out with a heavy push as they dominated play for the first three minutes. With an inability to clear the defensive zone, the Bulldogs forced a turnover which led to a shot on goal by Luke Mylymok. Hrenak stopped the initial shot but Mylymok buried his own rebound from the left low circle to draw the Bulldogs to within one goal.

Obviously energized, the Bulldogs added another goal less than a minute later when Blake Biondi scored an unassisted goal at 3:23 to knot the game at 2-2. Biondi beat Hrenak from the top of the left circle top shelf for his first goal of the season.

The Huskies appeared to gain an important advantage after Luke Mylymok was whistled for a check from behind on Brendan Bushy at 5:14. Mylymok was assessed a five-minute major and game misconduct and the Huskies barely went to work on the man-advantage when Nick Perbix was penalized for holding just 23 seconds later. This nullified two minutes of the major and the Huskies were unable to get much going even after the penalty to Perbix expired.

It was then Fanti’s turn to make a few big saves stopping a shot by Easton Brodzinski from the top of the circle, a goalmouth save on Jared Cockrell with 9:26 remaining and a huge save on Nolan Walker off a two on one.

Finally, it was the Bulldogs who completed their second-period comeback off a great individual effort by Cole Koepke. Unable to tie him up behind the SCSU goal, Koepke curled from behind the net and fired a shot from the right dot that was tipped by Nick Swaney to give UMD the 3-2 lead.

But, Nolan Walker and Micah Miller combined to salvage the period with a goal with 61 seconds remaining. Miller charged the net from Fanti’s right and he fired a shot that somehow got behind Fanti in a goalmouth scrum with Walker jamming it over the goal line to tie the game at 3-3.

Despite the strong period by the Bulldogs they still only outshot the Huskies 15-14 for the period.

Period Three
In this see-saw battle, it was the Huskies who started the period strong with Fanti turning aside a shot by Hentges from the low left circle and making a goalmouth save on Chase Brand who was eyeing his second goal of the game. The Huskies comeback was finally completed at 2:29 of the period with the game-winning goal by Kevin Fitzgerald (Jaycox, Trejbal) his 4th of the season. Jaycox slid the puck towards Fitzgerald stationed in the mid-slot and he re-directed the puck past Fanti for a 4-3 SCSU lead.

High slot GOAL!! @SCSUHUSKIES_MH regains the lead with the redirection in front. pic.twitter.com/066XnYe8V0

It was then a matter of the Huskies withstanding an expected push by the Bulldogs for the balance of the period. A slashing penalty to Sam Hentges with 6:01 remaining certainly exacerbated things but the Huskies defended well and limited the Bulldogs from gaining any traction on the man-advantage. The Bulldogs resorted to pulling Franti with 1:15 remaining for the extra attacker but again were limited in their attack and Sam Hentges backhanded a shot wide of the empty net as the Huskies ran out the clock for a 4-3 comeback win.

UMD outshot the Huskies 9-5 in the third period and 30-23 for the game. The Huskies David Hrenak stopped 27 of 30 shots on goal in earning his 6th win of the season. His record improves to 6-3-0. Ryan Fanti of the Bulldogs turned aside 19 of 23 shots in the loss to see his record drop to 5-4-2. Both teams were 0 for 2 on the man-advantage and the Huskies dominated in the faceoff circle winning 31 of 52 draws.

Nolan Walker had the only multi-point game for the Huskies with a goal and an assist for two points.