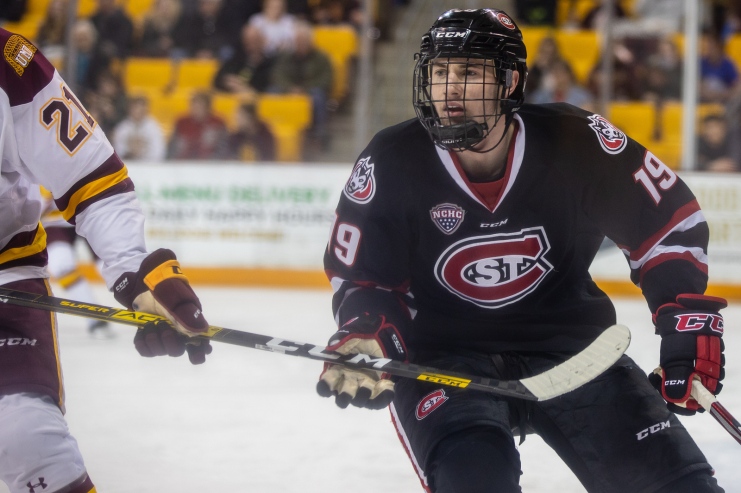 St. Cloud, MN – Following the recently completed NCHC Pod, the NCHC “East/West” teams commence playing in the “Travel” portion of the schedule on Friday, January 1 with Denver visiting Colorado College. “East” teams SCSU and UMD faceoff in the first two of six games between the teams as they attack the second half of the schedule on Saturday, January 2 at the Herb Brooks National Hockey Center. After two this weekend in St. Cloud, the Huskies return the favor by traveling to Duluth for two more at Amsoil Arena next weekend. The teams complete their season series with two more games on February 26/27.

The SCSU Huskies capped off play in the NCHC Pod with a satisfying 3-1 win over then #8 Denver University on Sunday, December 20th. The overall solid team game was boosted by a power-play goal by first-year forward Veeti Miettinen with 9:34 remaining in period three which turned out to be the game-winner. David Hrenak turned in a solid performance turning aside 31 of 32 Pioneers shots on goal. His record improves to 4-2-0.

The Bulldogs completed their play in the Pod suffering a 2-1 loss to the University of North Dakota on December 19th by a 2-1 score. Despite outshooting the Fighting Hawks by a 24-19 margin, UND’s Grant Mismash scored the game-winning goal with 48 seconds remaining in regulation to hand the Bulldogs their second loss of the season.

SCSU has an overall advantage of 72-54-6 and a 69-48-8 record since joining the NCAA Division I ranks.
The Bulldogs have taken the past two contests and the past three of five. The last two meetings took place in Duluth, last March with UMD winning 6-1 and 4-1. SCSU is 6-4-0 in the last ten games and each team has won 10 games in the last 20. Four of the last twenty games were decided in overtime.

Despite some major losses from last year’s squad, the Bulldogs have one of the top returning rosters in terms of goals. UMD returns 90 goals and seven of their top-10 from last season. They had a successful run in the NCHC Pod finishing with a 5-2-2 record and tied for third in the league standings with the Huskies who have played one less game. 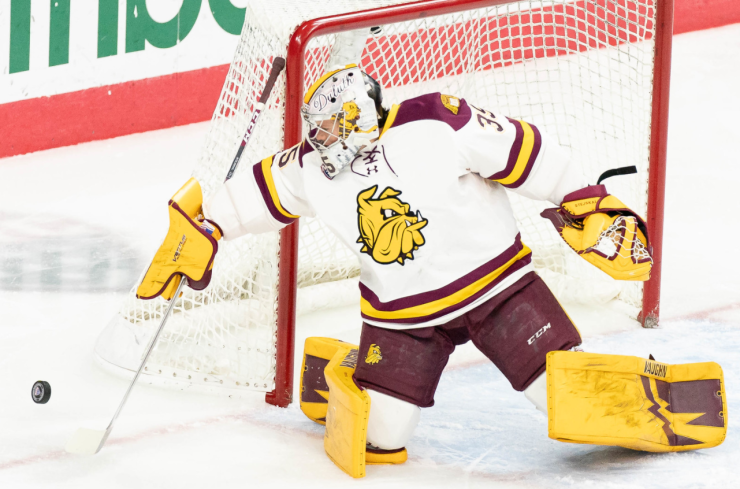 Goaltending
The Bulldogs suffered a major hit in the goaltending department with the graduation of NCHC Goaltender of the Year, Hunter Shepard. However, sophomore goalie Ryan Fanti has had a strong start to his career with four wins. He’s been solid with a .916 save percentage (third in the NCHC) and a 2.20 goals-against average (fourth in the NCHC). Over the first four games of the season and his career, Fanti has put together a .922 save percentage (second in the NCHC), along with a 2.20 (second in the NCHC) goals-against average and a 3-0-1 record.

Forwards
The departure of NCHC Defensive Forward of the Year Justin Richards was a big loss but the team returns one of the top offenses in the league with seven of their top ten goal scorers. Leading the group is junior forward Cole Koepke with 16 followed by junior forward Noah Cates with 14. Senior forward and Minnesota Wild draft choice Nick Swaney has had a strong start currently third in the NCHC with 12 points (3g, 9a). His nine assists on the season are No. 2 in the league so far.

Defense
The Bulldogs also saw the early departure of Hobey Baker winner Scott Perunovich who signed a professional contract with the St. Louis Blues in the off-season. Two other huge losses were Dylan Samberg who signed early with the Winnipeg Jets after playing in 109 career games and the graduation of Nick  Wolff, a four-year starter and physical presence on the blueline who signed with the Boston Bruins.

Senior and assistant captain Louie Roehl will lead the defense. He’s been a part of two national championships and played in 123 games. Roehl has 25 (7g, 18a) points and a +31 rating for his career. Others expected to step forward are senior, Matt Anderson and junior Hunter Lellig.

The addition of NHL draft choice and senior Dan Cairns, a 6’2″ 203-pound transfer from Cornell will bring experience and size to the unit.

Freshman Wyatt Kaiser, Darion Gotz, and Connor Kelly fill out the roster.  Kaiser, an 18-year-old draft choice of the Chicago Blackhawks was very impressive in the Pod and is currently 7th on the team in points with 4 assists.

A comprehensive preview of the team is here

Goaltending
David Hrenak is the anointed starter so far. The draft pick of the LA Kings won his 50th career game at SCSU on Dec. 1. He is one of just four SCSU goalies to win 50 career games. The others include Brian Leitza (66 from 1994-98), Ryan Faragher (53 from 2011-14), and Charlie Lindgren (51 from 2013-16). Hrenak is currently tied for first in the team records with 9 career shutouts.

Backing up Hrenak to start the season, Joey Lamoreaux and Jaxon Castor could be starters on many Division I teams. Castor was inserted for a Pod game vs Omaha and after a shaky start, settled down stopping 24 of 27 shots on goal (.888 SV%) to earn his first win since December 28, 2019. He also appeared in a relief role in the last game vs Colorado College, stopped all 10 shots and earned the win. 6’1″ Lamoreaux, an NCHC All-Academic Team selection was inserted in two games in 2019-20 and had a 3.25 GAA and .893 SV%. He was given the nod in the December 13th game vs Omaha and suffered a 2-0 loss stopping 19 of 21 shots and received little support early stopping 2 of 5 shots vs Colorado College.

Forwards
The Huskies are looking to re-tool an offense that saw its point production drop from 156 goals and 429 points in 2018-19 to 94 goals and 260 points in a season-shortened 2019-20. They’ll rely on senior, Easton Brodzinski (12-15-27) who led the team in scoring last season for a big year as he approaches the 100 career point milestone. The junior class of Sam Hentges, Micah Miller and Nolan Walker have come of age and the coaching staff looks for more consistency and scoring out of this bunch. The coaching staff wants these players to use their speed to be first on pucks, get to the net and create traffic. Upperclassmen and experienced forwards Kevin Fitzgerald and Colgate transfer Jared Cockrell need to be factors on offense as well. Senior, Will Hammer anchors a checking line providing grit and defensive play spelling minutes for the top lines.

The sophomore class of Jami Krannila, Chase Brand, Zach Okabe, Kyler Kupka and Thomas Rocco all had their moments and gained experience last season. The question is how much of a jump can they make this season after a solid offseason of improving their strength and speed.

Finally, newcomers Veeti Miettinen, Jack Johnston and Joey Molenaar will be thrown into the mix. Miettinen, a prolific Finnish scorer is the best bet to provide pop to the lineup immediately and has made an impact already with four goals and four assists for eight points good for second on the team. Included in these numbers are one game-winning goal and two power-play goals.

Defense
Defense will be solid but not flashy with captain Spencer Meier leading the unit. The loss of Jack Ahcan to graduation was huge making the contributions from junior Nick Perbix and senior transfer Seamus Donohue that more paramount. Luke Jaycox, Brendan Bushy, Ondrej Trejbal, Tyler Anderson, Trevor Zins and Freshman, Brady Ziemer will all compete for the 4-6th position. Newcomer Donohue has been particularly impressive with his mobility and ability to carry the puck up ice and it will help lessen the loss of Ahcan. Bushy has been a welcome surprise with his physical play on defense.

Perbix is unquestionably one of the top defensemen in the NCHC Pod. He’s currently leading the Huskies in points with 4-5-9 including one game-winning goal and is +5.

Graduate transfer Seamus Donohue has logged lots of minutes and moves the puck well. He was very effective in his pairing with Perbix in the NCC Pod at +6. Freshman, Brady Ziemer has provided some toughness and tenacity and has played in eight of nine games.

This will be a typically closely contested weekend between teams currently knotted in the NCHC standings. The Bulldogs who were expected to take a slight step backward due to their 2019-20 departures were one of the surprises of the Pod going undefeated in their first six games.

Of utmost importance for the Bulldogs was solid play out of their sophomore goaltender, Ryan Fanti and a better than expected performance out of their defensive unit that was decimated after the 2019-20 season.

As always, goaltending will be a key in a series between teams that are closely matched. With the Bulldogs over 80% on the penalty kill and the Huskies over 90% man-advantage goals may be at a premium in this series. Both teams have the offense to push the play up ice and you should see quick transition on the larger ice surface of the HBNHC. Both squads excel when shorthanded requiring both teams to be on their toes when on the power-play.

Both teams have good balance ar forward and with the Huskies the home team they’ll get the last change which will give them an advantage in matchups and coaching strategy.

I wouldn’t be surprised to see an overtime game this weekend.