St. Cloud, MN –  There were thirty-eight games over twenty-one days and I literally watched them all. Crammed into three weeks was a college hockey junkie’s dream. On some days, hockey streamed from 10:00 AM to midnight in some time zones. And, it didn’t disappoint. College hockey’s most dynamic conference showcased future NHL stars, outstanding coaching strategy and youngsters destined for greatness in this highly competitive league.

With so many outstanding team and individual performances compressed into a short period of time, it gave the viewer the opportunity to get familiar with every team and nearly every player in the NCHC. This was a showcase of sorts similar to what we’re used to from the junior hockey leagues only on a broader scale. So, to recognize some of the outstanding performances in this Pod, here’s one guy’s opinion of the All-NCHC Pod Team:

This team consists of three five-man teams (1st, 2nd,3rd), an all-rookie team, and an all-grinder team. I’ve used a weighted point system that I created but it’s by no means scientific and certainly debatable. And yes, I assume I left some of your favorites off. Obviously, there are a number of other players that could have been inserted. So, with that said, here are my choices: Notes: These three forwards were the heart and soul of each team’s offense. Shane Pinto finished the Pod tied for first with teammate Jordan Kawaguchi in total points. He wasn’t a leader in any single statistical category but is a testament to his all-around game. His 157 faceoff wins led all players in the Pod. Grant Cruikshank singlehandedly put the Tigers on his shoulders and was seemingly in the middle of every big play for Colorado College. Even strength, on the power play or short-handed, he found a way to score.  Nick Swaney quietly went about his business and made everyone around him look good with his nine assists. His 45 shots on goal clearly outpaced everyone in the conference and he finished third in points.

On defense, both Matt Kiersted and Nick Perbix were the clear leaders on the blue line for their teams. Rarely rattled in a pressure situation, both could control a game with a calm demeanor about them. UND fans have come to expect this out of Kiersted but Perbix has launched his game to a different level this season. Kiersted and Perbix finished as the top-two defensemen in points by the end of the Pod.

You can’t argue with the numbers. Isaiah Saville led all goaltenders that started more than 90% of their team’s games with his 1.98 GAA and .929 SV%. He also faced more shots (238) and played more minutes (515) than all goaltenders with the exception of Austin Cain of Western Michigan. Omaha is currently second in the league standings and he’s the reason why.

Notes: Carter Savoie was a perceived threat every time he had the puck in the offensive zone and tied for the conference lead in goals with seven. With an NHL release, He was a goaltender’s nightmare.  Chayse Primeau finished tied for third in points and had two game-winning goals for Omaha. He was particularly deadly around the goalmouth. Like Savoie, first-year player Riese Gaber was an impact player right out of the gate. He scored in his very first game, had two multi-goal games and finished the Pod tied for the lead in goal scoring. He also netted two game-winning goals.

On defense, Ronnie Attard finished the Pod with a -3 in plus/minus but this was certainly skewed by his -3 in the 10-2 blowout loss to Omaha. He had more shots on goal with 30 than any other defenseman. Solid as a rock and physical, this future NHLer has one of the scariest shots from the left point in the league. Derek Daschke was a stabilizing force on two-win Miami and finished second to Attard in shots on goal. An extremely reliable player, Dashcke finished the Pod tied for the team lead in goals and third in points on an offensively challenged team. Who knows what kind of numbers he could put up with a better supporting cast.

Ludvig Persson only played in 50% of his team’s contests but it was enough of a sample to recognize his outstanding play in the Pod. The freshman posted ridiculously stingy numbers with a 1.19 GAA and .962 SV% clearly better than any other goaltender in the league. His two shutouts led the league and that equates to shutting out his opponent in 40% of the games he played.

Notes: Jordan Kawaguchi had a solid but not spectacular performance in the Pod. He finished tied with teammate Shane Pinto with 13 points to lead the league but only netted three goals and only one vs UMD, SCSU and Omaha and finished +1 in plus/minus. WMU captain Paul Washe was as valuable as any player in the league to his team. He finished +5 on a two-win team, scored in every conceivable situation were it short-handed, power play or even strength and finished second to only Shane Pinto with his 138 faceoff wins. It was a toss-up between Ethan Frank and Josh Passolt for this final position. However, I ultimately chose Passolt, a straight-ahead player with a big shot. Passolt, always visible and on top of the puck, tied for fifth in total points and +1 despite his squad getting outscored 46-30. A shooter, he finished the Pod third in shots on goal with 36.

Jacob Bernard-Docker’s value was in his defensive play finishing second among league defensemen with a +8 rating and was only in the minus one game vs UMD. He finished second to Omaha’s Jason Smallidge whose numbers were propped up by a +5 performance in a ten-goal win over WMU. Much like Docker, Seamus Donohue’s value was solid defensive play and holding down the fort when Perbix was rushing up ice. Donohue finished +6 with three points and was only in the minus one game. Against Denver, Omaha and North Dakota he was +6. His play was invaluable to the Huskies success.

The final position was a toss-up between Adam Scheel and Ryan Fanti and I let the numbers rule. Scheel played more minutes, had a better goals against (2.13 vs 2.20) and a toss-up at save percentage (.913 vs .916). His winning percentage was the best in the conference as well with a 6-1-1 record. All of these players are a coach’s dream for the blue-collar effort they put forth. None of these players generated more than three points with the exception of Jack Randl who posted 4 goals and 4 assists for 8 points. There are others, but these players really stood out to me in the Pod. 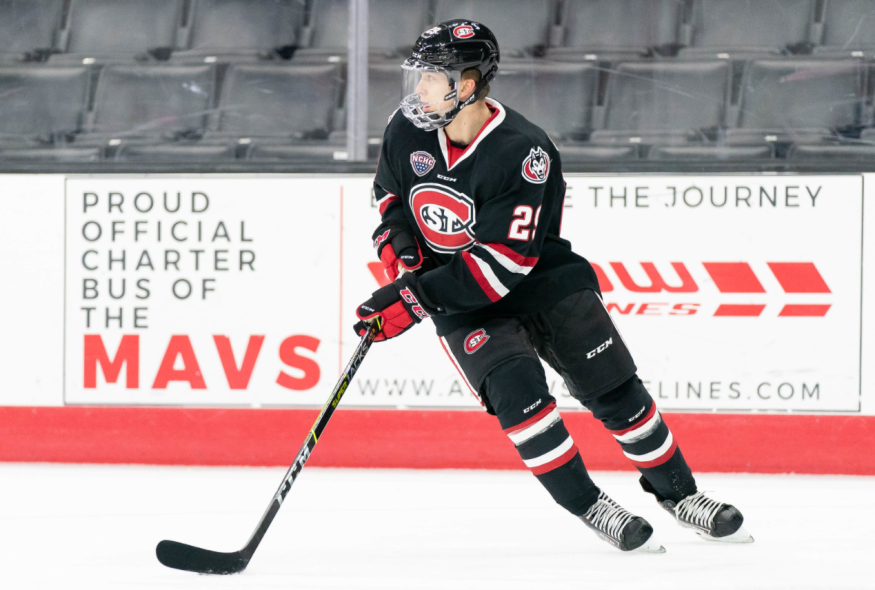 Notes: There can be little argument that Savoie, Miettinen and Gaber were the most dynamic first-year forwards in the Pod. The defining difference with these three is their quick release and ability to beat goaltenders from anywhere in the scoring area. All three possess an NHL wrist shot and that’s what makes them so deadly. The other interesting point is none of these players stretches taller than 5’9″. They all can skate and are deadly on the man-advantage. Savoie and Gaber were discussed above. Veeti Miettinen got better as the Pod progressed with three goals and four points in his last three games and you could see his confidence build. He finished with four goals and eight points and was +4.

Mike Benning could be the heir apparent to replace the offense of the departed Ian Mitchell for the Pioneers. Benning finished Pod play with a goal and six assists and was the top point producer among first-year defensemen in the Pod. He finished +1 on a team that was outscored 28 to 23. Wyatt Kaiser stepped right into the first defensive pairing for UMD and never looked out of place. He finished with only four points but was solid defensively and had a minus rating in only one game in the Pod.He became a reliable fixture for the Bulldogs who were filling some big holes at defense.

Ludvig Persson was discussed above.

So, those are my teams. One guy’s opinion.

3 thoughts on “One Guys Opinion: The All-NCHC Pod Team”