Omaha, NE- A valiant comeback by the SCSU Huskies ended in disappointment as Jordan Kawaguchi scored just 8 seconds into overtime to capture a 4-3 win on Wednesday, December 16th at Baxter Arena in Omaha. North Dakota leveraged some brilliant goaltending by Adam Scheel and a key penalty kill on a five-minute major in the third period to win two of three league points. This is the third loss in four games for the Huskies and they’ve now fallen behind North Dakota by a single point and UMD by 5 points in the NCHC standings. Omaha’s tie and shootout win vs UMD lifted them to a tie with SCSU with 13 points.

“It was the turning point of the game (the five-minute major) and we didn’t get it done on the power play,” said coach Brett Larson. “It’s been a bit of a struggle for us this year. I thought we had it going a little but obviously, we have to look to improve there and make some changes because that’s a big moment in the game and we have to find a way to get it done.”

Clearly disappointed Larson said ” We were down 1-0 and 3-1 and we get back in the game and gave ourselves an opportunity and weren’t able to capitalize. It came down to special teams and they won that battle 1-0 and that was the difference in the game.”

“We got four out of six points (from North Dakota) in two games and that should be a good thing but it doesn’t feel like it right now.”

The Fighting Hawks took an early lead 2:15 into the game on Mark Senden’s first goal of the season. A turnover in the neutral zone sent Senden in the other direction and he beat David Hrenak on the Fighting Hawk’s first shot of the game.

An interference call to UND’s Matt Kiersted 4:54 into the period gave an early opportunity to the Huskies to even things up but despite extensive zone time of close to two minutes, the Huskies were only able to muster a few shots that sailed wide of the mark.

It wasn’t until 16:08 of the period that the Huskies finally got on the board after a goal by Easton Brodzinski, his third of the season and 45th of his career. Brendan Bushy spotted Brodzinski up ice and sent the puck his way apparently glancing off Chase Brand and then to Brodzinski who beat Scheel with a strong wrist shot glove side from the right circle.

The period ended with an elbow to the head of Jared Cockell on an entry into the UND zone at the 20:00 mark placing the Huskies on the man-advantage to start period two.

The period had limited shots on goal, with SCSU outshooting the Fighting Hawks 6 to 5 while each team was unsuccessful on their single power play opportunities.

The Huskies had two minutes of man-advantage to start the period but had little to show for it with the exception of Hentges and Miettinen missing the net with their shots. As the penalty to UND expired, the Huskies found themselves in the penalty box as a result of too many men on the ice. The Fighting Hawks power play was a shooting gallery and both Riese Gaber and Shane Pinto had point-blank opportunities but were unable to convert and the Huskies escaped unscathed thanks to some good goaltending from Hrenak.

Scheel made a key save 5:20 into the period when Zach Okabe’s wraparound attempt rebounded directly to Kevin Fitzgerald who fired a shot that was gloved by Scheel. This was the save of the game at that point and negated a one-goal lead for the Huskies.

An interference call on Hentges had the Huskies in the penalty box for the third time in the game and UND finally made them pay. Hrenak first had to make a save on Jasper Weatherby on the left post and then Jordan Kawaguchi placed a shot off the post before Shane Pinto finally converted at 7:54. Pinto sent a low shot off the left post through traffic for a 2-1 North Dakota lead.

Scheel had to come up huge again making a glove save on a point-blank shot by Veeti Miettinen from the right slot at 9:32 and a pad save on Nolan Walker with 3:49 remaining in the period after some extended offensive zone pressure by the Huskies requiring a timeout by North Dakota. The game had definitely tilted in the Huskies direction but after the timeout, Collin Adams made a rink length rush up ice, beat Spencer Meier from the outside and roofed a shot over Hrenak for a 3-1 lead.

Credit to the Huskies, they didn’t give up and Nick Perbix got them back into the game with a goal with just 58 seconds remaining in the period. Perbix pinched in deep in the UND zone and captured a puck that deflected off Jasper Weatherby and roofed a backhand shot over Scheel to narrow the score to 3-2.

In a period with the Huskies having the upper hand, they outshot the Fighting Hawks 12-9.

After an uneventful three minutes to start the third period, the Huskies comeback was complete after a goal by Veeti Miettinen 4:43 into the period. Jami Kranilla fed Miettinen from the blueline and while falling forward, Miettinen sniped a shot under the crossbar from the slot to tie the game at 3-3. This was Miettinen’s second goal of the season.

A five minute major to UND’s Josh Rieger for boarding at 5:28 was just the break the Huskies needed to take their first lead of the game. Other than a hard shot from Jami Kranilla from the right circle, a missed re-direct by Kranilla at the goalmouth and a save on a shot by Brodzinski from the right slot it was otherwise a highly ineffective man-advantage with maybe three total shots on goal.

The teams traded several opportunities the balance of the period and the Huskies took a timeout with 6:46 to go in regulation to re-group.

UND had a puck in the net waved off at 5:53 when Hrenak was shoved into the goal with the puck and Senden placed what could have been the game-winner off the post with 1:46 to play. Scheel also made a key save on a low shot from the left slot by Micah Miller with 46 seconds left in regulation.

The teams headed into overtime with SCSU outshooting UND 9-6 in the period and 27 to 20 for the game. 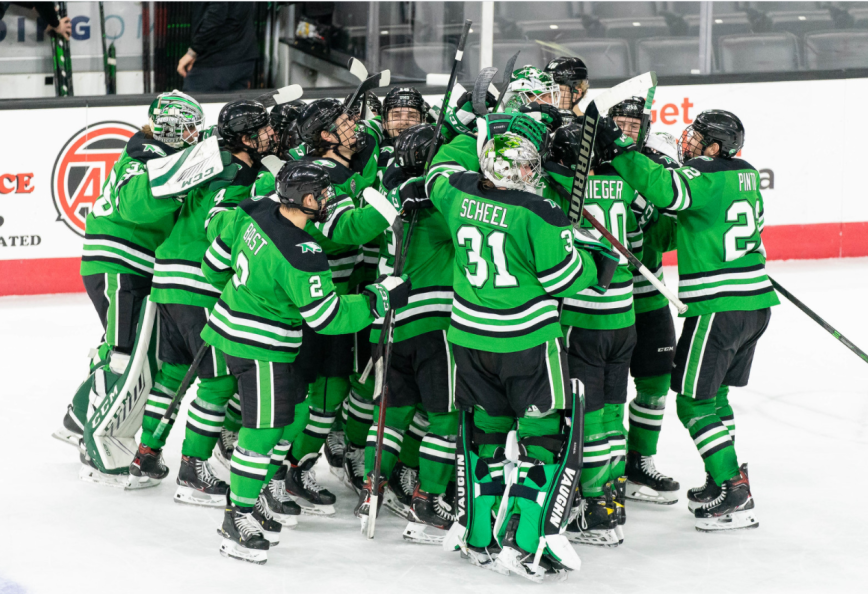 The game ended quickly in overtime. UND won the faceoff and Kawaguchi carried the puck into the SCSU zone and beat Hrenak over his glove hand with a shot from the low left circle for a 4-3 overtime win and the extra league point.

“It was an emotional and big win,” said head coach Brad Berry. “It’s one of those things when you are undermanned but there are no excuses. They had a full roster and they played well. I thought we played an unbelievable game as far as doing what we had to do to get the extra point although we wanted all three. With the group digging in they found a way to do it.”

About surviving the five-minute major in period two Berry said ” They had pride and they knew they had to step up in the key time of the game. In the timeout, we said this was the turning point of the game and we needed to get everything on this kill. They were in sync together. It was nice they stepped up and it was a big part of the game.”