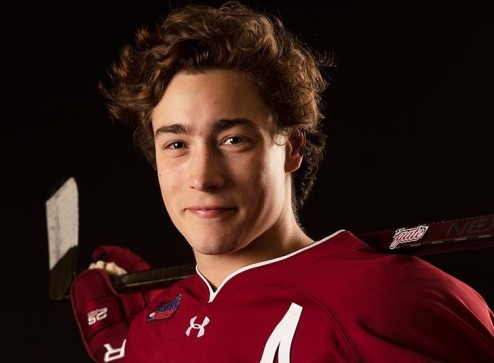 St. Cloud, MN – Currently, the NCAA has mandated a “Dead Period” in Division I college hockey with coaches not allowed to meet face-to-face with a recruit or do any in-person scouting. Regardless, it has not curtailed the efforts of the St. Cloud State University coaching staff as they scored their second commitment in two days with the addition of Colgate graduate transfer, Jared Cockrell. Following his inclusion on the transfer portal, the 5’11” 185 pound right-shooting forward and two-time assistant captain of the Colgate Raiders indicated his intention to transfer to the Huskies. Once his paperwork is completed, the 24 year-old will be eligible immediately for the 2020-21 season.

Cockrell, who completed his degree in economics at Colgate is a native of Kents Hill, Maine and will be the first SCSU player from that state. He played three seasons of prep hockey at the Kents Hill School and blew up the New England Prep School League with 48 goals and 73 assists for 121 points in 80 games over three seasons. He took his game to the Brooks Bandits of the Alberta Junior Hockey League (AJHL) and again proved  his offensive ability compiling 61 goals and 62 assists for 123 points in 115 games. In 2014-15 he finished the season 6th in goals and 10th in points in the AJHL and in 2015-16 was second in goals with 36 and 7th in points with 68 as the Bandits captured the championship of the league.

He originally committed to the Air Force Academy in January of 2015 but changed his commitment to Colgate University in December of 2015. An assistant captain for the Raiders in 2018-19 and 2019-20, Cockrell played a total of 112 games the past four seasons primarily at right wing. He scored 23 goals and 29 assists for 52 points. He sustained a season ending injury after seven games in 2018-19 allowing him an additional year of eligibility. In 2019-20 Cockrell finished fourth in team points with 7 goals and 10 assists for 17 points including two game-winning goals. A clutch player for the Raiders, he had five career game-winning goals for Colgate.

Cockrell will bring some high-end speed and skill to the Huskies and should prosper on the larger surface of the Herb Brooks National Hockey Center. Cockrell is described as a player who thinks the game well, can play at a high pace and likes to shoot the puck. He’s an excellent student and good team leader.

With the addition of Jared Cockrell and Michigan Tech University graduate transfer and defenseman, Seamus Donohue, the Huskies have really solidified their lineup with veteran players who will immediately step in and be impact players in 2020-21.