St. Cloud, MN – The Huskies conclude the regular season with a trip to Duluth in a  crucial battle with the #5 ranked UMD Bulldogs. Obviously, there is more on the line for St. Cloud State as the Bulldogs are securely in second place with home-ice for the first round of the NCHC playoffs locked in at Amsoil Arena next weekend. The Huskies, on the other hand, still have hope for a third-place finish, albeit a long-shot and a fair opportunity to finish in fourth place as they trail Western Michigan by two points heading into the weekend. The tie breaker gets complicated but at a minimum, the Huskies need to capture at least one win this weekend to have a chance at a fourth place finish. The Bulldogs on the other hand, look to face either Omaha or Miami in the first round of the playoffs. They will also look for some payback vs the Huskies after being swept by SCSU in a January series in St. Cloud.

The Huskies stretched their unbeaten streak to seven games as they toppled the #6 ranked Denver Pioneers by a 5-1 score at the HBNHC on Friday, February 28. Kevin Fitzgerald had a big night with two goals and an assist and the Huskies had success on 2 of 6 power play opportunities.  David Hrenak had another outstanding game in goal stopping 31 of 32 shots on goal (96.8%) to earn his 12th win of the season.

In the weekend finale, Denver broke the Huskies unbeaten steak of seven games with a solid 5-2 win. The Huskies took an early 1-0 lead on a goal by Nolan Walker but Denver rattled off four straight five on five goals to gain a convincing win. Jamiu Krannila netted the Huskies other goal and David Hrenak was beat four times on 31 shots (.87%).

The Bulldogs traveled to Colorado Springs and swept the CC Tigers by 4-2 (EN) and 6-1 scores.  On Friday, the Bulldogs took advantage of a five-minute major to Chris Wilkie in period three to score the game-winning goal on the power play by Dylan Sandberg.

On Saturday, the Bulldogs scored six unanswered goals before the Tigers were able to score and cruised to a 6-1 win. UMD received scoring from six different players. Hunter Shepard stopped 27 of 28 shots on goal in earning the win.

With 13 upperclassmen and many key players returning from their national championship squad of 2019, it’s no surprise to see the Bulldogs a threat to make a run at the national title for the third consecutive year. Their strength is from the goaltender out with Hunter Shepard returning for his senior season along with a strong trio of defenseman including Scott Perunovich, Nick Wolf and Dylan Samberg. Losing several key forwards from last years squad generated some questions about their offense but they are producing over three goals per game. The power play has been very good and is currently 12th in the country with over a 26% success rate.

Goaltending
It was a boost for this team to see Hunter Shepard return for his senior season. His numbers last season were spectacular with a 29-11-2 record, 1.76 GAA and .923 SV%. Once again, he’s a workhorse playing in all 32 games for the Bulldogs. However, the numbers have dipped with a 2.26 GAA and .915 SV%.

Defense
The Bulldogs feature six upperclassmen on the blue line and return three prominent players in Scott Perunovich, Dylan Samberg and Nick Wolf. Perunovich, currently the team’s leader with 39 points provides the same type of play for the Bulldogs as Jack Ahcan does for the Huskies. Sizable defenseman Samberg (6’4″ 225) and Nick Wolf (6’4″ 230) lead a defense allowing 2.34 goals per game. Samberg has 17 points –  and is eighth on the squad in points. The defense is currently ranked 15th in the country and allowing more scoring than last year having finished the regular season allowing only 2.00 goals per game. The penalty kill is nowhere near last years performance currently 30th at  80.99%. They were a top-five unit last season.

Offense
The offense took a hit with the graduation of last seasons top scorer Parker Mackay who was also a clutch player with 4 game-winning goals. Additional losses were Peter Kreiger who scored 9 goals and the departure early of Riley Tufte to the Dallas Stars organization. He never quite met the expectations as a scorer but did have 6 points in 13 games vs SCSU.

The Bulldogs did return a sizable chunk of offense (over 75%) from last year with 96 goals and 268 points.This season, scoring is coming from underclassmen with sophomores Noah Cates (14 goals), Cole Koepke (14 goals) and Jackson Cates (8 goals) providing nearly 35 percent of the goals. Minnesota Wild draftee and junior, Nick Swaney, always a threat, has netted 12 goals as well. Another junior, Kobe Roth has surpassed his eight goals from last season and has 12 as well. It’s become a more balanced offense over the season and they are currently ranked 12th in the country scoring 3.25 goals per game. Surprisingly, this is more offense than the Bulldogs were producing at the end of the regular season last year. 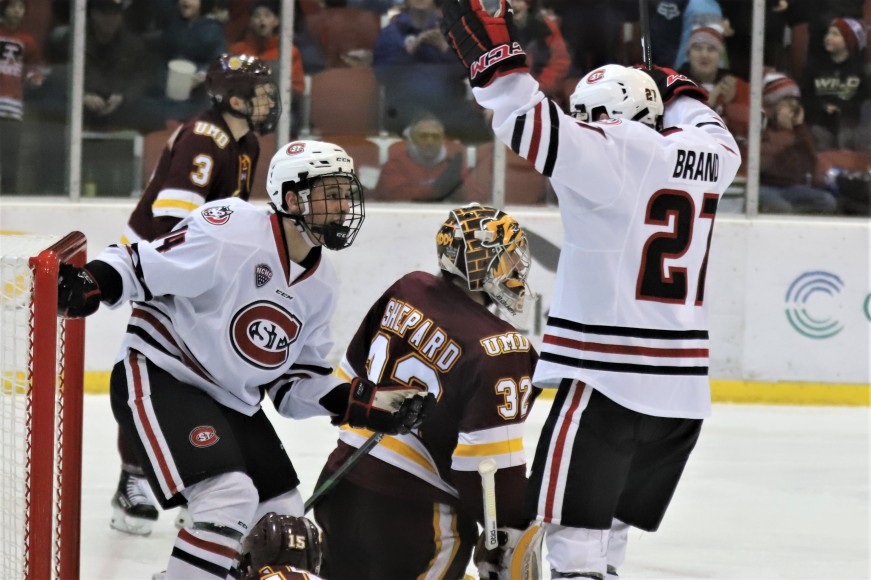 A group of seniors lead the Huskies in the 2019-20 season. All-American and All-NCHC player Jack Ahcan was named captain and brothers Jack and Nick Poehling and Clark Kuster, a fifth-year senior are assistant captains. The team has added ten new faces after the departure of seniors Jimmy Schuldt, Jon Lizotte, Patrick Newell, Robby Jackson, Jacob Benson and David Zevnik. They also saw the departure of two top-notch centers in Blake Lizotte and Ryan Poehling who signed NHL contracts.

Offense
The team lost it’s top five scorers from last season – Newell, Lizotte, Jackson, Poehling and Schuldt. This group contributed 213 points (77 goals and 136 assists) and dominated minutes on the power play. All three – Lizotte, Poehling and Schuldt have been in an NHL lineup this season. It’s been a challenge replacing that scoring and replacing two elite centermen.

With an offense ranked 25th in the country, the team relies heavily on the goal scoring of junior Easton Brodzinski with 42 career goals and currently the team leader in points and goals. However, Jack Poehling has been the most active scorer as of late with five goals and nine points in the past eight games and brother Nick leads the team with 10 points in the last eight games. It’s also encouraging to see Micah Miller with 8 points in the same span.

This past weekend vs Denver, five goals were scored between Kevin Fitzgerald(2), Jami Krannila (2) ad Nolan Walker (1). They’ll need more balanced scoring like this down the stretch. Sam Hentges has dipped to third in team points and only has two goals since November 9th. The team sorely needs his offense in the playoffs.

Defense
Defense was assumed to be the strongest position on the team entering the season. It’s beginning show it’s potential allowing 2.41 goals per game over the last twelve games. The Huskies returned five starters from last season in Jack Ahcan, Nick Perbix, Luke Jaycox, Spencer Meier and Brendan Bushy. They add two other veterans in fifth-year senior, Clark Kuster and junior, Tyler Anderson, who missed the entire season due to injuries in 2018-19. Newcomers include 6’3″ 190 pound Ondrej Trejbal from the Czech Republic and Trevor Zins from nearby St. Michael, MN.

As a unit, the defense is currently minus 6 but has seen improvement.. On the other hand, Jack Ahcan is 7-17-24 (4th in points) and recently reached the 100 career point mark and with 81 assists is first all-time for defensemen at SCSU. Spencer Meier has elevated his game greatly and is currently 4-6-10 and is even on plus/minus. He has become a key component of the Huskies power play unit. Nick Perbix is 4-11-15 and provides offensive push from the blue line but is -8 on the plus/minus. First-year Ondrej Trebil is a big body with good offensive skills and has fit in nicely as a first-year play. He is +1 in plus/minus and has six points.

Goaltending
Junior David Hrenak has participated in 30 of 32 games this season. The LA Kings draft choice finished the 2018-19 season with a 23-5-2 record, a 2.18 GAA and .906 SV%. He was a NCHC second team All-Star last season and the expectations were high for Hrenak who has played 86 career games for the Huskies. Hrenak is finally hitting his stride and has his save percentage over 90 percent and he’s going to be the goaltender counted on down the stretch. In the last twelve games, he’s posted a 92.4% save percentage and the Huskies need that level of play to be successful over the next two games and the playoffs. In the January sweep of the Bulldogs, he stopped 59 of 60 shots for a ridiculous .983 save percentage. He stopped 61 of 65 shots on goal for a 93.8 SV% vs North Dakota two weeks ago and 57 of 62 shots (92%) vs Denver last weekend.

This is a critical series for the Huskies in terms of the NCHC playoffs, the Pairwise and for momentum purposes. They are 7-2-1 in their last 10 games on home ice and it would be an advantage to be at home for the first round of the NCHC playoffs. The Huskies play well in Duluth and have a 9-7-2 advantage since February of 2011.

The Huskies are hoping that senior captain Jack Ahcan will be back in the lineup for this crucial series. Ahcan missed the Saturday game last weekend vs Denver with an upper body injury and currently is listed as day-to-day.

The Huskies ground out two low-scoring wins vs the Bulldogs in January and would like to duplicate that effort this weekend. They seem to have settled on some workable line combinations that have the freshman line of Okabe, Krannila and Brand back together and Kevin Fitzgerald with upperclassen Hammer and Wahlin.  The combination was good last weekend generating two goals for Fitzgerald who had been in a scoring slump.

Again, discipline is a key for the Huskies even though games with the Bulldogs are typically high-emotion contests. The Bulldogs have a potent power play and SCSU would be wise to skate five on five with the Bulldogs. SCSU is counting on another strong series by Goaltender Hrenak to be a ballast to typically strong goaltending by the Bulldogs Hunter Shepard.

As mentioned, there is more on the line for the Huskies, but it shouldn’t be a weekend where the Bulldogs take their foot off the gas pedal.

All the links for this weekends games can be found HERE

If surfing via mobile device check out huskiesillustrated.com