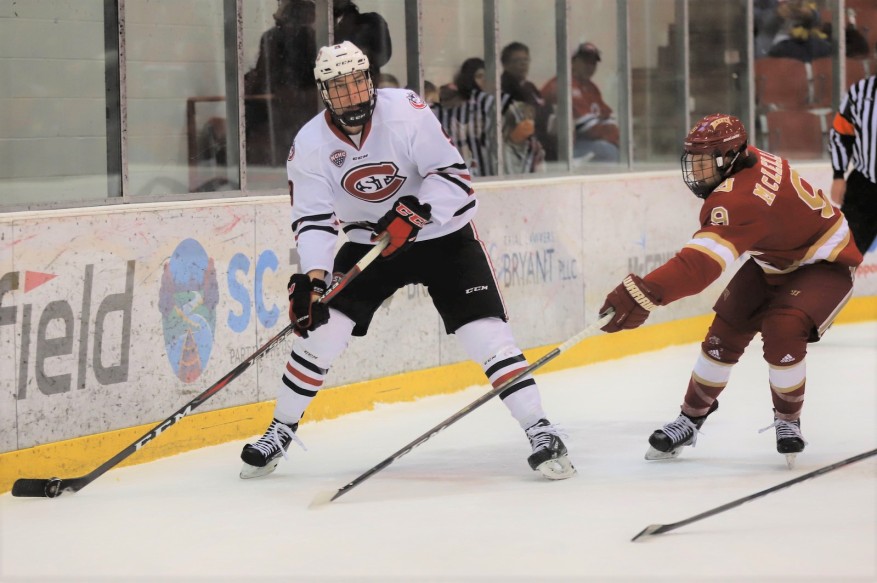 St. Cloud, MN – The grind continues for the unranked SCSU Huskies as they host #6 ranked Denver University at the Herb Brooks National Hockey Center this weekend.  After a yeoman’s effort last weekend vs then #1 North Dakota garnering 5 of 6 league points, the Huskies will attempt to gain more league points as they face fourth place Denver. With four points separating the squads in the NCHC standings, this weekends results could determine whether they host a first-round NCHC quarterfinal series or (likely) hit the road (at Denver) in a couple of weeks. The surging Huskies are 6-2-2 in the last ten games including earning 11 of 12 points vs top-ranked UMD and North Dakota. It won’t be an easy task facing a Denver team that had their way with the Huskies sweeping them on the road in January. This weekend’s series will once again give the evolving Huskies an indication if they are a genuine post-season contender. A successful weekend could theoretically place them within striking distance of the Pairwise “cutoff” line with another important series pending next week vs the UMD Bulldogs.

the Huskies had a highly successful weekend vs #1 ranked North Dakota at the HBNC last weekend skating to an overtime 3-3 tie on Friday (shootout win for SCSU) and a 2-1 win on Saturday. Led by their seniors, Jack Ahcan and Jack Poehling (2 goals) scored the SCSU goals to send the game to overtime. It ultimately went to a shootout with Easton Brodzinski scoring on his opportunity to earn the extra lead point for SCSU. David Hrenak stopped 32 of 35 shots on goal in the win.

In the Saturday rematch, a first period power play goal by Spencer Meier and a third period goal by Jack Poehling, his third of the weekend, gave SCSU the hard-fought 2-1 win. Hrenak was solid again in goal turning aside 29 of 30 shots.

Denver hosted Miami and rolled over the RedHawks outscoring them by a combined 14-3 score over the weekend. On Friday, the game was all but over after the first period as Denver raced to a 4-1 lead. In the end, Tyler Ward had the hat trick and Cole Guttman scored twice in the 7-3 final. Magnus Chrona stopped 20 of 23 shots on goal for the Pioneers.

In the series finale, the Pioneers again dominated, scoring four times in period two and shut out the RedHawks 7-0. Emilio Petterson  scored twice and Cole Guttman added his third goal of the weekend in this lopsided win. Devin Cooley stopped all 22 shots he faced.

Despite heavy losses after the 2017-18 season, the Pioneers regrouped and found themselves in the NCAA tournament for the 12th consecutive season in 2018-19. This was also their third Frozen Four appearance in the past four seasons. However, the season ended with a 4-3 loss to Massachusetts in the semi-finals.

The Pioneers return in 2019-20 with a good mix of talent and experience. They are tournament tested, are sound defensively and have added some pop to their offense. Statistically, they are solid in most categories and rank 11th and 10th respectively in offense and defense.

The Pioneers have twelve players in double-digit scoring including ten forwards. Overall they have 19 players with at least one goal. An extremely skilled player, Norwegian, Emilion Pettersen leads the squad with 31 points. Cole Guttman, who defected to the Pioneers after committing to the the Huskies leads the team in goal scoring with 13 goals. Freshman forward, Bobby Brink from Minnetonka, MN was a member of the USA World Junior Team and has 11 goals. Others of significance are senior, Liam Finlay, sophomore, Tyler Ward and  junior Kohen Olischefski, an energetic and active forward. Their scoring margin is over +1.00 and that equates to wins.

Defense
Junior Ian Mitchell, who was a member of the 2020 gold medal winning Spengler Cup Tournament is the leader on defense. His 27 points lead the defensive unit. Michael Davies who seems like he’s been on the team forever has logged 155 career games and is +70 over that span. The 5’8″ 160 pound defender plays much bigger than his size. Conversely, 6’4″ 225 Griffen Mendel is another veteran with 106 career games and is second in plus/minus at +12. Sophomore Slava Demin has been effective as well with 9 points.

Goaltending
Last years starter, Filip Larsson who logged 22 games and had a 1.95 GAA and .932 SV% bolted after one season signing with the Detroit Red Wings. However, with junior Devan Cooley as a backup they appeared to be in good hands. After all, he saw time in 20 games last season. Surprisingly, it’s been first-year goaltender Magnus Chrona that’s taken hold of the position. The 6’6″ Swede has a 14-6-3 record and good numbers with a GAA of 2.25 and save percentage of .916. Cooley has appeared in 8 games with a 1.73 GAA and .920 SV%.

A group of seniors lead the Huskies in the 2019-20 season. All-American and All-NCHC player Jack Ahcan was named captain and brothers Jack and Nick Poehling and Clark Kuster, a fifth-year senior are assistant captains. The team has added ten new faces after the departure of seniors Jimmy Schuldt, Jon Lizotte, Patrick Newell, Robby Jackson, Jacob Benson and David Zevnik. They also saw the departure of two top-notch centers in Blake Lizotte and Ryan Poehling who signed NHL contracts.

Offense
The team lost it’s top five scorers from last season – Newell, Lizotte, Jackson, Poehling and Schuldt. This group contributed 213 points (77 goals and 136 assists) and dominated minutes on the power play. All three – Lizotte, Poehling and Schuldt have been in an NHL lineup this season. It’s been a challenge replacing that scoring and replacing two elite centermen.

With an offense ranked 27th in the country, the team relies heavily on the goal scoring of junior Easton Brodzinski with 42 career goals and currently the team leader in points and goals. However, Jack Poehling has been the most active scorer as of late with five goals and nine points in the past six games. This includes three goals last weekend vs North Dakota.

From an offensive standpoint, it’s encouraging to see Micah Miller starting to show the excitement he displayed as a prep player. He’s strong on his skates, has blazing speed and shoots well on the fly. It was simply a matter of time that this 24 goal scorer in the USHL began to show some offense. He has seven points in the last six games. Nick Poehling has 8 points in the last six games.

Defense
Defense was assumed to be the strongest position on the team entering the season. It’s beginning show it’s potential allowing only 1.64 goals per game over the last ten games. The Huskies returned five starters from last season in Jack Ahcan, Nick Perbix, Luke Jaycox, Spencer Meier and Brendan Bushy. They add two other veterans in fifth-year senior, Clark Kuster and junior, Tyler Anderson, who missed the entire season due to injuries in 2018-19. Newcomers include 6’3″ 190 pound Ondrej Trejbal  from the Czech Republic and Trevor Zins from nearby St. Michael, MN.

As a unit, the defense is currently minus 5 but improving. On the other hand, Jack Ahcan is 7-16-23 (3rd in points) and recently reached the 100 career point mark. Spencer Meier has elevated his game greatly and is currently 4-5-9 and is even on plus/minus. He has become a key component of the Huskies power play unit. Nick Perbix is 4-9-13 and provides offensive push from the blue line but is -7 on the plus/minus. First-year Ondrej Trebil is a big body with good offensive skills and has fit in nicely as a first-year play. He is +2 in plus/minus.

Goaltending
Junior David Hrenak has participated in 28 of 30 games this season. The LA Kings draft choice finished the 2018-19 season with a 23-5-2 record, a 2.18 GAA and .906 SV%. He was a NCHC second team All-Star last season and the expectations were high for Hrenak who has played 84 career games for the Huskies. Hrenak is finally hitting his stride and has his save percentage over 90 percent and he’s going to be the goaltender counted on down the stretch. In the last ten games, he’s posted a 93.3% save percentage and the Huskies need that level of play to be successful over the next four games. In the January sweep of the Bulldogs, he stopped 59 of 60 shots for a ridiculous .983 save percentage. He stopped 61 of 65 shots on goal for a 93.8 SV% last weekend vs North Dakota. For his efforts against North Dakota he was named NCHC Goaltender of the Week. 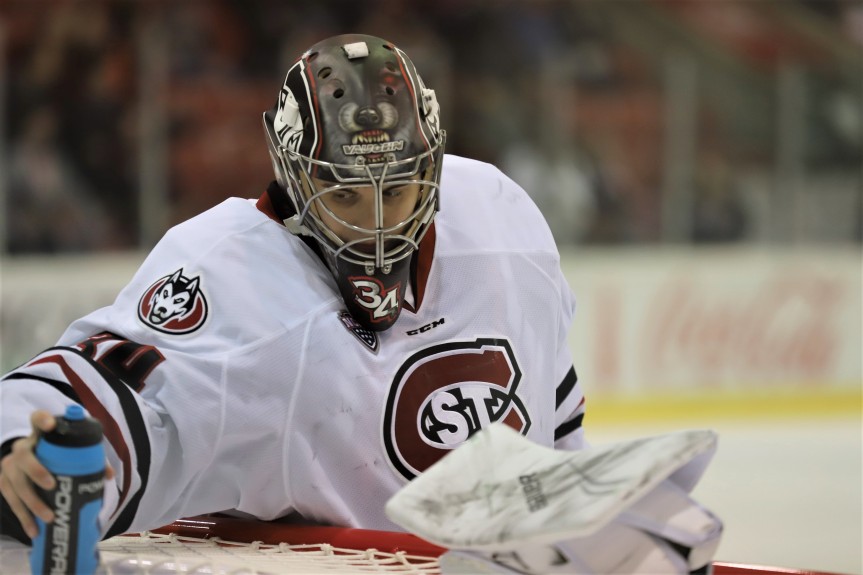 This will be another highly charged weekend. the Huskies had perhaps their most difficult weekend of the season (other than Western Michigan) vs the Pioneers. The Pioneers outshot the Huskies 79-51 over the series and sustained long periods of puck control against SCSU. The Huskies are a better defensive squad since those January games and they’ll need to play a more aggressive brand of hockey than allowing Denver to cycle unaccosted in the SCSU zone. They need to defend much better in front of the SCSU goal than they did in January.

The Huskies are not a potent offensive team and as they did vs North Dakota will need another solid weekend from David Hrenak and then attempt to grind out some wins. The Huskies can’t let the Pioneers jump out to a commanding lead as they did in Denver and expect to fight back as Denver is too good defensively to allow that to happen.

The Pioneers sophomore tandem of Cole Guttman and Emilio Pettersen have been productive against the Huskies with Guttman producing 3 goals and 2 assists in four games and Pettersen 3 goals in four games. The Huskies need to contain these two this weekend.

Once again, SCSU seniors Jack Ahcan and Jack and Nick Poehlings will have to lead as they did last weekend vs North Dakota. If the Huskies stay out of the penalty box and roll all four lines they have a better than average chance to have success vs the Pioneers on home ice.

“This weekend, we’ll see a typical Denver team” said coach Larson. “They are fast, skate well, forecheck hard and try to take away time and space. They are a highly skilled team that works very hard.”

“I can’t worry about how they (Denver) are going to be when they come in. I have to worry about us and that we come back with our best this weekend. I think more than anything, the guys realize each weekend doing well leads to an even bigger weekend. Doing well against North Dakota made these games against Denver even bigger and that’s what the guys want. They want to be in big games that matter and keep moving up in the conference. Our goal is to be playing our best hockey at this time of year. We will be playing playoff hockey each weekend now and I like that” said Larson.

All the links for this weekends games can be found HERE

Visit our sister site huskiesillustrated.com if surfing via mobile device