St. Cloud, MN – Happy New Year! Reflecting on the last decade, I’ve been posting a series of St. Cloud State University hockey photos from my archives on Twitter. It’s an interesting narrative from the viewpoint of a lens and it’s a fun exercise to dig into this photo archive and recall some of the great moments from 2010 through 2019. The feedback has been great and I appreciate sharing these moments with those that follow the program. Photo quality has been somewhat inconsistent but as I’ve upgraded my equipment the images get progressively get better. So enjoy and if you’re interested in viewing more photos go to the CenterIceView Photo Gallery. Images are available for purchase in a variety of formats and there is no profit placed on these photos. 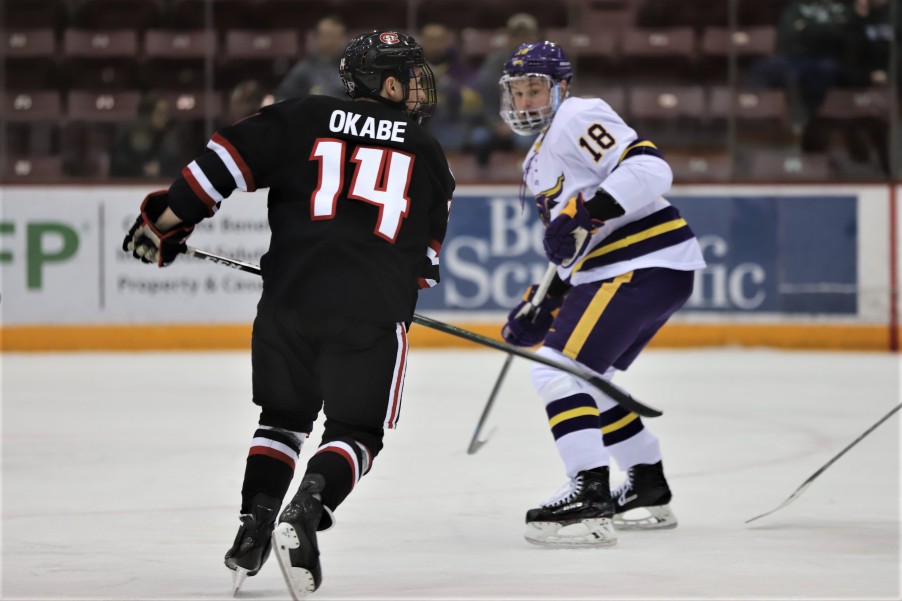 Okabe Dazzles at the Mariucci Classic

The Huskies may have surprised a lot of folks with their 7-2 win over then #2 ranked and #3 Pairwise Minnesota State, Mankato in the Mariucci Classic. Inconsistency has been a characteristic of this Huskies squad this season but when they’ve been on their game they can be awfully good. Games that come to mind are the October 2-1 win over Northeastern and the recent 4-1 win over Omaha. They put it all together vs the Mavericks in the opening game of the Classic and it became quite a coming out party for first-year forward Zach Okabe. It’s not surprising he put up some offense as this youngster netted 53 goals in the Alberta Junior Hockey League the past two seasons. But, to snare four goals including a “pure” hat trick against a strong defensive team in Mankato was pretty astonishing. Linemate Jami Krannila benefited with four assists and they were both named to the Mariucci Classic All-Tourney team along with sophomore defenseman, Nick Perbix. With a goal each game, Micah Miller was a candidate as well. It’s a good sign for the Huskies to have these underclassmen performing so well

In the Sunday championship game, the Huskies became unhinged for a minute and thirty four seconds and the Gophers scored three times to take what turned out to be a lead the Huskies couldn’t overcome. The Gophers tagged starter Jaxon Caster twice and Hrenak, who relieved Castor once but clearly none of the three could be considered soft goals. The first was a power play goal off a shot that defected through traffic by Sammy Walker that Castor simply did not have a chance on. The second started with the Huskies losing a defensive zone draw and Tyler Nanne tossing the puck through traffic from the point and it found it’s way past Castor for a 2-0 lead. Hrenak replaced Castor and he was beat on the very next shot by Bryce Brodzinski. A defensive breakdown had Brodzinski streaking into the zone all alone on Hrenak. With that patented Brodzinski shot and time to pick his spot, the advantage was clearly with the shooter.

The Huskies had an opportunity to climb back into the game benefiting from the penalty “du jour” of the night – consecutive hooking calls on Sammy Walker, Jonny Sorenson and Matt Staudacher. With the latter two giving the Huskies a five on three for over a minute, they simply couldn’t get much going to take advantage of this opportunity. A shot off the post by Nick Perbix with four seconds remaining in the period symbolized the frustration of the period.

Coach Mike Gibbons summed things up by saying ” This team last night played as perfect a game as I’ve seen. Line after line where every single hockey player was playing great. From the drop of the puck we didn’t have that today. Part of that was because of Minnesota. I think that’s one of the better games I’ve seen them play. They were good and their young guys were good and all the credit to Minnesota in how they played. There were opportunities to get back in the game and if they weren’t on it could have been a better game.”

Captain Jack Ahcan summed things up by saying ” That’s what happens when you step off the pedal for a few minutes. We took the pedal off the gas in the second period and let those three in but our goalies played great. They bailed us out.” 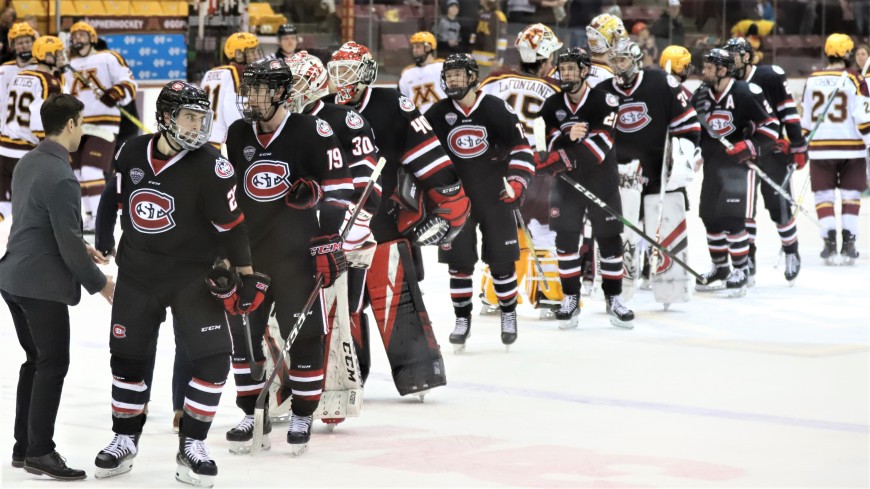 I spoke with Coach Motzko on Monday following the game and he agreed that it was perhaps their best outing of the season. After defeating a tough Bemidji squad the day before, it gave his young team confidence and he felt his players had extra jump in their step entering the contest with the Huskies. In particular, he felt his his defense which has been somewhat maligned this season (ranked 50th in the country entering the series) played well. He was pleased with the outstanding play of junior goaltender, Jack LaFontaine, the tourney MVP and the play of first-year defensemen, Jackson LaCombe and Ryan Johnson.

He admitted it was a “weird” experience for both he and assistant, Garrett Raboin as they stood on the Gophers bench watching the Huskies enter the ice. I sensed there was some relief for both SCSU alums to get this first game against their former team behind them. Following the game, Coach Gibbons commented “I have nothing but respect for Bob. He brought me out of high school hockey to come back and we coached together, he’s a friend and I have a lot of respect for him. It wasn’t a lot of fun losing but to his credit good for them and good for him.”

“We had a good two years with them (Motzko and Raboin) ” said Ahcan. It was good to see him and Garrett and we miss them. But, we have a good coaching staff now and it would have been nice to get the win.”

If anything, the coaching staff should have a clear indication that they have two goaltenders to rely on the second half of the season. “Jaxon was outstanding in the game and kept us in it ” said Gibbons of Castor’s play vs Minnesota. “He gave up two goals and I’m not sure any of those were his fault. We needed a momentum change and he knows that. Something needed to change in that game as you could tell it was going in the wrong direction. Then, David came in and he was outstanding. When you have two goaltenders playing like that it’s a good sign.”

Box score attendance was listed at 14,387 combined for the Saturday/Sunday sessions. There’s been a lot of chatter about attendance and the lack of a larger crowd. However, one must keep in mind the tourney had to deal with poor weather combined with a Sunday night championship game that was televised and competition from a Minnesota Vikings home game. So, all in all, one can’t be too critical of the attendance. However, I’d prefer a Friday/Saturday tournament.

Although not official, it’s likely that the Huskies could be back in the Mariucci Classic next season.

A Look Ahead for the Huskies

After a weekend off, the Huskies return to the ice on Friday/Saturday with a road series vs the Denver Pioneers. That weekend begins an eight game stretch in January that will most likely decide the Huskies post-season fortunes – short of winning the NCHC conference tournament. Currently mired 38th in the Pairwise, it’s imperative the Huskies go on a significant winning streak if they are to have any hope of improving their Pairwise to a position of earning an at-large bid to the NCAA tournament. With Denver and Minnesota-Duluth currently top-ten Pairwise teams, success against those two is significant.

The Huskies record of 4-2-0 in the month of December included an overtime loss. During that successful span, they’ve had surprisingly balanced scoring with the breakdown by class as follows:

Micah Miller, who has been platooned on the “fourth” line has led the Huskies over that stretch if you discount the four goals in a single game by Okabe. He’s beginning to take advantage of his outstanding straight-out speed and has two breakaway goals in that stretch. Sam Hentges, who leads the squad in points with 22 had a blistering start to the season with six goals in eight games. However, he’s only scored once in the following ten games. The team will need Hentges to get back on track along with linemate Nolan Walker who has yet to notch a goal after netting eight last season. However, in Walker’s defense, he’s had four assists in the past four games. Trends are important and the youngsters are beginning to score.

Just as significant is over that stretch of six games, the team has allowed 2.50 goals per game while scoring 3.66 goals per game. Those numbers are much better than their season marks of 3.22 allowed and 3.00 average goals per game.

Goaltending has been discussed above and I suspect it’s safe to say that Hrenak and Castor will be a rotation with the coaching staff keeping the competition going at that position.

With a stretch of sixteen conference games to end the season, it’ll be an interesting run to follow. Consider this as food for thought. On January 1, 2015 the Huskies had an overall record of 7-9-1 and ultimately advanced to the NCAA West Region Championship. SCSU’s record on January 1, 2020 is 6-8-4.