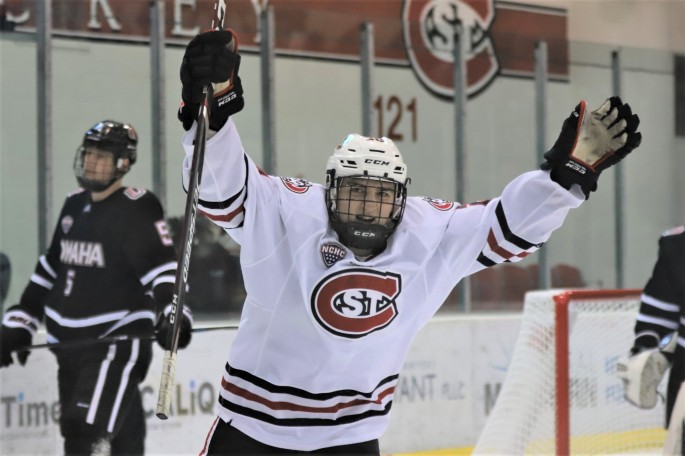 St. Cloud, MN – After a highly successful road trip last weekend, the big question was whether the Huskies could carry that momentum back home vs the Omaha Mavericks. It may not have been a perfect game but darn close as the Huskies battled to a 4-1 win at the Herb Brooks National Hockey Center on Friday, December 13. A cast of usual suspects scored three of the four goals, Micah Miller added his first and David Hrenak was 20 seconds shy of a shutout as the Huskies won their third consecutive conference game. The team will try to close out the 2019 conference schedule with a win and sweep of the series in the rematch on Saturday.

Both teams came out with great pace in the first period and despite neither team getting on the scoreboard it was not devoid of opportunities. A mere 1:27 into the game Easton Brodzinski launched a one-timer from the left circle that was saved by Omaha goaltender Isaiah Saville. Seven minutes later, Saville had to come up big thwarting a wraparound attempt by Sam Hentges. Brodzinski was robbed again with a shot from the top of the left circle about 14 minutes into period as his shot rang off the crossbar. On the other end, Hrenak made a nice save through traffic with about five minutes remaining in the period and finally before the period ended Saville made a kick save off a shot by Ahcan who was trailing a two on one. In all, the Huskies outshot Omaha 11 to 6 and clearly had the better opportunities as SCSU kept the majority of the Omaha shots above the circles and three of their attempts blocked by the defense. Both teams were 0 for 1 on the man-advantage in the period.

The second period began with the Huskies on the man-advantage due to a slashing penalty on Joey Abate that extended into the session. The Huskies wasted no time scoring with a nice give and go play between Jack Ahcan and Nick Poehling. Ahcan fed Poehling who was stationed below the goal line and he returned the puck to Ahcan who cut to the net and beat Saville glove side with a wrist shot. This was Ahcan’s (Poehling | Hentges) fourth goal of the year and gave the Huskies a 1-0 lead. The Huskies nearly made it a two-goal lead on a golden opportunity for Nolan Walker whose shot from inside the right circle had an out of position  Saville beat but he somehow got a stick on it. Micah Miller made a nice rink length drive to the net showing great speed but was whistled for hooking at 17:26. The Huskies killed the penalty, their ninth consecutive since the North Dakota series and Miller atoned for his penalty on his next shift. Yet again, Miller showed his speed capturing the puck a center ice and wheeling around Omaha defenseman, Nate Knoepke cutting in on Saville and sliding the puck under him five hole. This was Miller’s first goal of the year and the assists went to Nolan Walker and Jack Poehling and SCSU had a 2-0 lead at 17:26 of period two. Zach Okabe was stoned by Saville on a point blank shot with 1:41 remaining in period two and Jack Ahcan was whistled for cross-checking to end the period. In another active period, Omaha attempted 20 shots with five being blocked by the Huskies and 11 hitting the mark.  SCSU had 14 attempts, six of the “Grade A” variety with two getting past Saville. 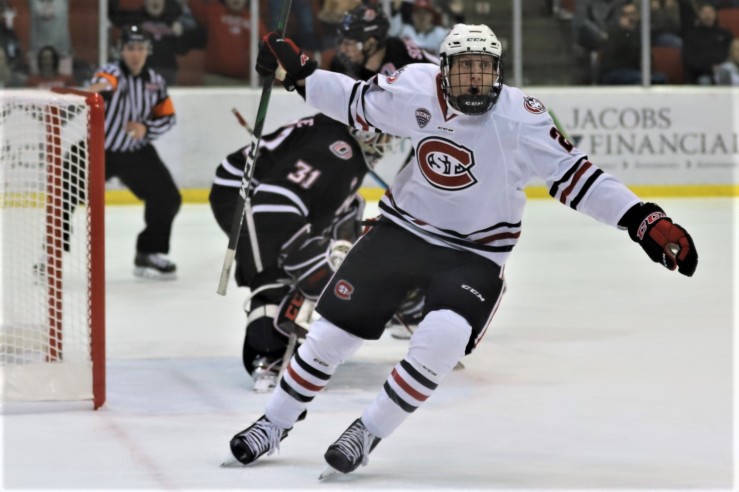 The Huskies had to kill 59 seconds of a penalty to Jack Ahcan that carried over to period three – their 10th consecutive since the UND series. Then, they added their third goal of the game three minutes into the period by Nick Poehling (Fitzgerald | Trejbal). On a deft play by Fitzgerald, he drove the net from the left wall and found Poehling in the low slot with Saville having no chance on the quick wrist shot by Poehling. This was Poehling’s fifth of the season and fifth point in the last two games. Winning races to the puck and with good puck control in the third, the Huskies stretched the lead to  4-0 on a brilliant play by captain, Jack Ahcan. A puck tipped into the SCSU zone had a back-peddling Ahcan one-time a pass to Easton Brodzinski who was just outside the Omaha blue line. Brodzinski broke in Saville and beat him one on one with a low wrist shot glove side. This was Brodzinski’s sixth goal of the year and seventh point in the last eight games. With a shutout on the line, the Mavericks found a way to finally beat Hrenak with just 20 seconds remaining in regulation. With the Mavericks pressuring, Ahcan blocked a shot and went down but the Huskies were unable to clear and Martin Sundberg tipped the puck past Hrenak for the 4-1 final.

In a highly entertaining game with good pace by both teams, the Huskies outshot the Mavericks 28 to 26. Omaha attempted 51 shots on goal for the contest with the Huskies blocking seven. This was the third straight game where the Huskies penalty kill was perfect with Omaha 0 for 5 on the man-advantage. This continued a streak of 11 straight penalty kills for the Huskies. Meanwhile the Huskies were 1 for 3 on their opportunities. In another outstanding game  by Hrenak, he turned aside 25 of 26 shots on goal while counterpart Saville stopped 24 of 28. The Huskies were also good in the faceoff circle winning 37 of 66 faceoffs.

“All in all, we are playing a really good team game right now against a good Omaha team that didn’t quit until the end.” said coach Brett Larson. “We’re a young group trying to get over that hump of being afraid to lose. We’ve talked about the standard of play for sixty minutes no mater what the score is. When those big moments come up in the third they are able to keep playing rather than sit back and hold the lead.” On the play of captain Jack Ahcan he said “I love his passion and that’s feeding through the whole team.”

“Obviously our power play came through and our penalty kill. ” said Jack Poehling. “We’re playing with more heart and desperation. With ten freshman they have to get comfortable and we need them to continue to grow.”

Reigning NCHC Defensemen of the Week, Jack Ahcan (1-1-2) and Nick Poehling (1-1-2) had a multi-point game for the Huskies.