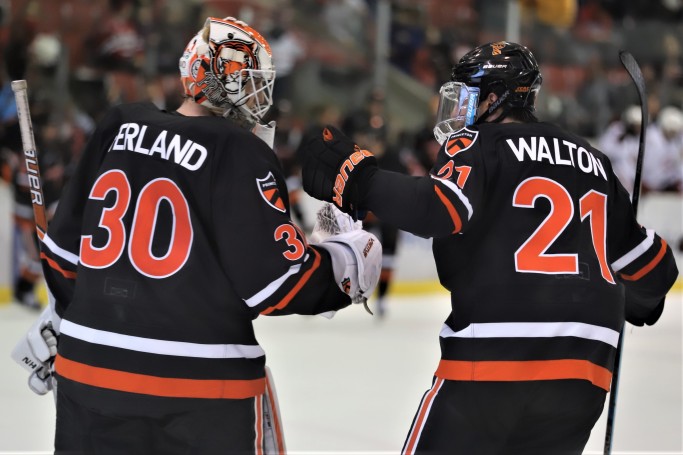 St. Cloud, MN – Princeton junior goaltender, Ryan Ferland probably wishes the St. Cloud State Huskies were on the Tigers schedule four times a year. The native of Franklin, Mass. has faced the Huskies three times in his career and is undefeated so far. In 2017, the then freshman stopped 80 of 85 shots in the series against the #1 ranked Huskies earning two overtime ties and was named “First Star of the Game” each night. On Friday in St. Cloud, Ferland did it again, turning aside 31 of 34  shots on goal backstopping the Princeton Tigers to a well-deserved 5-3 victory. For the Huskies, it was a second consecutive Friday miscue, looking at times like they were the team in it’s first game of the season.

The Huskies did their best to pressure the Tigers in the first minute of play and had a nice point blank opportunity by Nick Perbix go wide but it was the Tigers who struck first. Corey Andonovski scored the Tigers first goal of the season on it’s first shot of the season just 1:45 into the contest. Defenseman, Matthew Thom carried the puck wide into the SCSU zone and dished the puck off from below the goal line to Andronovski who snapped off a quick wrist shot that beat Hrenak glove-side high for a 1-0 lead. Two consecutive penalties on the Tigers gave SCSU some early man-advantage opportunities. First, a tripping penalty to Thom at 3:37 yielded few opportunities for SCSU other than a goal mouth chance by Brodzinski that was turned aside by Ferland. It wasn’t until the second penalty to Derek Topatigh for a check from behind that the Huskies were able to convert. Sam Hentges, who has been the primary offensive weapon for the Huskies in the early season scored his fourth goal 34 seconds into the power play off a nice play by Brodzinski. Brodzinski threaded a pass to Hentges who was stationed in the right crease from the top of the left circle and he tapped it past Ferland to tie the game at 1-1. But, the Tigers responded again at 12:20 on a blue collar goal by senior forward Liam Grande. Left unaccosted in a goal mouth scramble, Grande swept the puck past Hrenak for another one-goal lead they would never relinquish. The Huskies failed to convert another power play late in the period and were down 2-1 in a period nearly even in shots on goal favoring SCSU 12-11. The Huskies attemped 24 shots, had 8 miss the mark and 3 were blocked.

The second period started out disastrous for the Huskies yielding two more goals to extend the Tiger lead to 4-1.  A slashing penalty to Chase Brand was converted almost immediately by Jackson Cressey, the Tigers leading returning scorer. Hrenak yielded a huge rebound off a shot by Andronovski and Cressey who was charging in easily put it past Hrenak for a 3-1 Princeton advantage. Coincidental to the goal, Nick Poehling was whistled for kneeing and the Huskies were able to kill that penalty but less than a minute after the penalty expired the Tigers cashed in again with a goal by junior forward Luke Keenan. A turnover deep in the zone slid to Keenan who took a quick wrist shot from the left dot that beat Hrenak off the right post for what ultimately was the game-winner. A late period push by the Huskies got them back into the game with goals by Spencer Meier and Jack Ahcan. First, at 13:34 Sam Hentges backhanded a pass to Meier who was all alone in the left circle and he sent a hard shot past Ferland for a 4-2 game. Then, with the Tiger’s Matt Kellenberger in the box for boarding, Jack Ahcan (Hentges | Meier) added his second goal of the season. Hentges made a behind-the-back pass to Ahcan who sent a shot from the high slot past Ferland’s glove side for a 4-3 contest. A late period penalty to Luke Jaycox dampened the momentum despite SCSU killing the man-advantage. SCSU attempted 20 shots in period two with 13 on goal and SCSU outshot Princeton 13-8 for the period. However, the Huskies only had one legitimate opportunity between the dots the entire period.

Down by a goal, the Huskies began to apply more pressure in the third period as the Tigers were intent to ease off on the forecheck and play mistake-free hockey. The Huskies attempted 26 shots in period three but the Tigers did a nice job boxing out the Huskies with 90% of those attempts above the circles. However, the Huskies had several grade A opportunities by Kuster, Poehling, Hentges and Brodzinski all turned aside by Ferland. They were handed a golden opportunity at 10:44 after an interference call on Matthew Thom but again, the power play which has been fairly ineffective this season was shut down again by Ferland and company. Then, unable to clear the SCSU zone, the Tigers Spencer Kersten jammed the puck past Hrenak in a goal-mouth scramble at 14:14 giving them a two-goal margin.The Huskies pulled Hrenak for the extra attacker with 2:18 remaining to no avail as Princeton held on for the 5-3 win. The Huskies attempted 26 shots in the final period with Princeton blocking 10 of them and only 9 of those attempts were on goal.

For the game, Hrenak stopped 18 of 23 shots on goal while Ferland, who put forth another outstanding effort against the Huskies turned aside 31 of 34 shots. SCSU attempted 70 shots in the game vs 33 for Princeton. In a solid defensive effort, Princeton blocked 16  shots on goal to the Huskies 5. The Huskies had success on the power play converting 2 of 5 while Princeton had success on 1 of 3. The Huskies had a slight edge in the faceoff circle winning 34 of 77. Will Hammer had the most success winning 5 of 7.

“It’s frustrating to throw away 45 minutes of really good hockey by making some early season mistakes” said coach Brett Larson. “The one area Princeton outworked us was in front of the net. Princeton did a good job and they are a good team and not to take anything away from them at all. I’m disappointed we didn’t bear down and finish some of the chances around the net. That last goal was a back-breaker because we felt we had them on their heels for awhile. ”

Coach Larson  predicted lineup chances for the Saturday rematch. “There will be some lineup changes for sure and we’ll keep the competition going. Now early in the season it’s been hit or miss. When it’s there it looks really good and when it’s not there it’s not good at all. It’s part of the building and growing process. There will be some changes tomorrow night.”