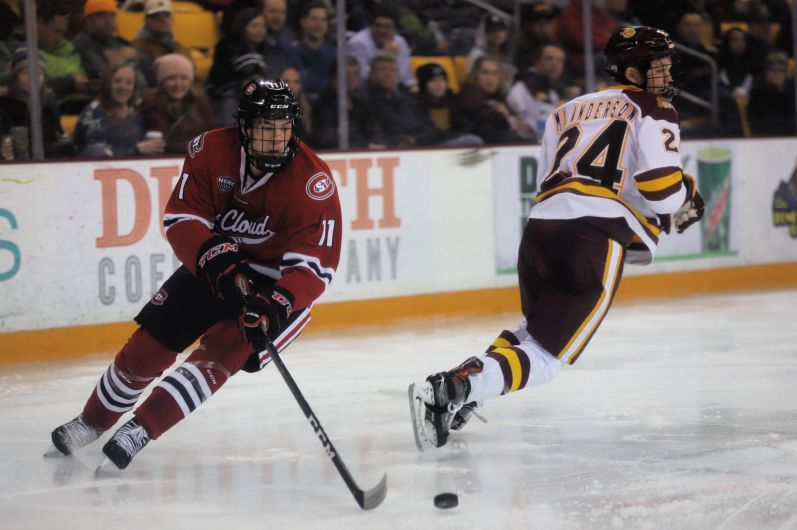 St. Cloud, MN – Regardless of what happens, it’s been a season to remember for the 2018-19 SCSU Huskies. In my season preview in October I made some moderately bold predictions:

If I’ve learned anything about the formula for success in college hockey it’s essentially three things beyond outright talent  – experience, depth and goaltending. This team is blessed with all three. SCSU loses four players from the 2017-18 squad that went 25-9-6 overall, won the regular season NCHC title and made their 12th appearance in the NCAA tournament – 5th in six seasons. Success under new Head Coach Brett Larson should follow once again.

With the Penrose Cup already in hand they host the #3 ranked UMD Bulldogs at the Brooks Center this weekend. This series had been marked on the calendar all season with the assumption that it could  decide the Penrose Cup Champion. However, the Huskies overachieved beyond lofty expectations to capture the trophy two weeks ago. Regardless, It’s a fitting regular season finale for the top two teams in the conference. On paper, they match up well with not many clear advantages to either squad. The Huskies are a little more explosive on offense but that’s neutralized by the strong defense of the Bulldogs. Both excel on special teams. It might be surprising to see the Huskies hold an all-time advantage of 65-47-8 in the Division One era. There’s really been no clear advantage over the past 20 games with the Bulldogs carrying a 11-8-1 edge. In the last ten games, the teams are knotted at 5-5-0.

So, if you don’t have a ticket for this series, my question is why not? This is the top contest in college hockey this weekend and the on-ice product will be of national championship caliber. 150 miles separates these two schools that are rivals in literally every other collegiate sport. And, to top it off the Huskies lured former UMD assistant Brett Larson to skipper this multi-talented squad. Bragging rights on many different levels will be in play and if you are a college hockey fan, it doesn’t get any better than this.

With that said, here’s how I figure things will sort out following this weekend:

It’s amazing how so many different scenarios can still play out with one weekend to go.

And, a reminder folks, Saturday’s game will have a 4:07 PM CT puck drop. That is a schedule change.

See you at the rink.

2 thoughts on “Huskies Host the Bulldogs and Some Other Stuff”