Omaha, NE – Two weeks before the end of the regular season and with a 15-2-3 National Collegiate Hockey Conference record the #1 ranked SCSU Huskies captured their second consecutive Penrose Cup and third in the six-year existence of the NCHC. Tabbed second behind the UMD Bulldogs in the pre-season poll to capture the Penrose Cup, the Huskies did not allow for any suspense winning 5-0 Saturday, February 23 at Baxter Arena in Omaha. Combining the SCSU win and Colorado College trouncing Western Michigan 8-2 wrapped up the league title for St. Cloud State University. Despite UMD’s 3-2 win over North Dakota, the Huskies remain 13 points ahead of the Bulldogs with only 12 points left to capture by seasons end. Nevertheless, the Huskies still battle  the Broncos and Bulldogs the last two weekends of the season in what should be a playoff atmosphere for both series.

The Huskies got off to a quick start in this one smothering the Mavericks with their speed and puck control and scoring twice in the first seven minutes. Jack Poehling (Schuldt | N Poehling) gave the Huskies an early 1-0 lead with his 7th goal of the season at 3:23. Poehling made a left to right move in the slot and lifted a backhand over Weninger for the one-goal advantage. SCSU added another three minutes later on a goal by Robby Jackson ( B Lizotte | Newell) for his 13th goal of the season and a 2-0 Husky lead. It wasn’t until the second half of the period that the Mavericks finally got some traction and penetration into the SCSU zone. They had an opportunity off a turnover at the Omaha blue line by Jimmy Schuldt that led to a breakaway by Tristan Keck but Schuldt was able to recover enough that Keck couldn’t get a decent shot on Hrenak.  The Huskies nearly added to their lead with 2:29 remaining in the period on the power play. Easton Brodzinski had a point-blank shot on goal ten feet out but Weninger made a key save. Hrenak also was called upon to make several more saves in the last two minutes of the period to retain the 2-0 SCSU lead. Omaha outshot SCSU 11-9 in the period and SCSU was 0 for2 on the power play while the Mavericks were 0 for 1.

Heading into period two, Omaha had the momentum of a power play for a minute and a half but were unable to convert. However, they had the Huskies on their heels somewhat for about the first six minutes of play and while they did a nice job holding the puck in the SCSU zone were unable to get anything past Hrenak. Nick Perbix had a nice end to end rush with 12:30 remaining that required a big save by Weninger and then on Jack Poehling who snared the rebound but Weninger stretched and got a pad on it. The Huskies finally dented Weninger again 18 seconds later with a goal by Jake Benson (Wahlin | Walker) at 12:12. Walker circled the back of the net and then sent a backhand to the front of the net with Wahlin getting a piece of it and Benson tapping it past Weninger for a 3-0 SCSU advantage. Despite the Huskies dominating the later stretches of the period, Omaha did have a shot advantage of 11-10. Omaha again was unsuccessful on their only power play of the period.

With a sniff of the Penrose Cup on hand, the Huskies made sure there was no let up in the third period scoring twice and sealing the sweep of the weekend. A mere 47 seconds into the third period the Huskies stretched their lead to 4-0 after a goal by Blake Lizotte (Schuldt). This was Lizotte’s 11th goal of the season. Schuldt placed a shot from just inside the blue line off the cross-bar and Lizotte was there to convert the rebound. A couple of minutes later, Jake Wahlin nearly added another intercepting the puck and going in all alone on Weninger but was unable to capitalize on the opportunity. However, Patrick Newell (Jackson) who was held pointless on Friday got into the scoring column with his team-leading 16th goal of the season at 4:33. Newell buried a shot from the left dot for the Huskies fifth and final goal of the game. In a period dominated by SCSU they outshot the Mavericks 12-8.

Surprisingly, despite winning by a five-goal margin, the Huskies only had a one shot advantage 31-30. David Hrenak stopped all 30 shots on goal to register his fourth shutout of the season and saw his record improve to 18-3-2. Once again, David Weninger had another active game facing 24 shots and turning aside 19 in the loss. He was relieved after 45 minutes of play and Alex Blankenburg finished the final 15 minutes and stopped all seven shots he faced.  Neither team had any success on the man-advantage with both going 0 for 3. SCSU had the advantage in faceoffs 31 to 22. 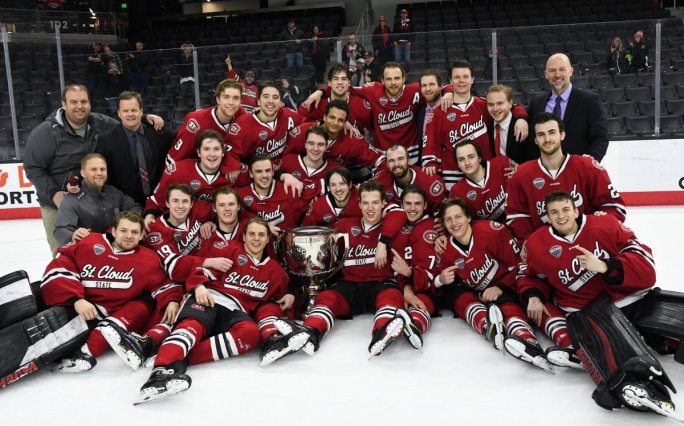