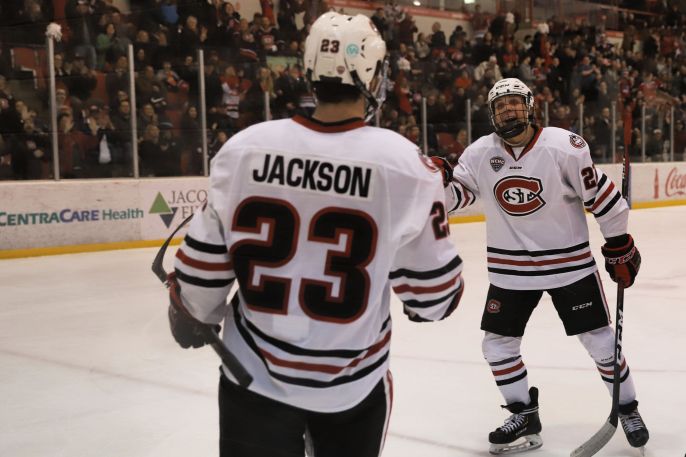 St. Cloud, MN – A few weeks ago I wrote about the importance of getting the Huskies two top centermen back in the lineup. Oh what a relief it is to have Ryan Poehling and  Blake Lizotte back taking faceoffs for the Huskies. Last night, Ryan Poehling had two goals and two assists to lead top-ranked SCSU to a 5-1 win over the Miami RedHawks. On Saturday, it was Blake Lizotte who took charge scoring twice and adding an assist for a three-point night in another 5-1 win and sweep of the RedHawks. It was a five-point weekend for both Lizotte and Poehling as the Huskies continued their undefeated streak to 12-0-0 at the Herb Brooks National Hockey Center. The win was also their 20th of the season and allowed them to maintain an eight-point lead over Minnesota Duluth in the NCHC conference standings. It was also a night of celebration for Patrick Newell who with his two-point game surpassed the 100 career point mark joining Robby Jackson and Jimmy Schuldt who did so in January. And, for those watching the Pairwise, the win kept the Huskies ranked #1 in this all-important ranking.

Period One
As they did on Friday, the Huskies scored early –  2:25 into the contest, to take a quick 1-0 lead. With Miami’s Alex Mahalek in the penalty box for hooking, the Huskies took advantage with Blake Lizotte’s (R Poehling | Schuldt) first goal of the game. Ryan Poehling carried the puck into the Miami zone via the right lane and put the brakes on in the right circle slipping a pass through traffic to Lizotte who tapped it past Ryan Larkin for a 1-0 SCSU lead.  Newell earned his 100th career point on a heady assist of the Huskies second goal at 5:56 of the period. Newell carried the puck behind the back of the Miami goal and found Jack Ahcan (Newell | Perbix) high in the slot and he beat Larkin with a low wrist shot stick side  for his third goal of the season and ultimately the game winner.In a dominant first period, the Huskies outshot the RedHawks 18-5 on 24 shot attempts.

Period Two
The Huskies carried their momentum into period two and dominated play with their relentless attack into the Miami zone. Larkin was kept busy once again facing another 13 shots on goal in the period and the Huskies added three more goals by periods end. Blake LIzotte ( Jackson | Schuldt) added his second goal of the game and 10th of the season at 12:19. Robby Jackson performed some fancy stick work in the left circle and found Lizotte parked at the right goalmouth and he one-timed it into a wide open right side of the net for a 3-0 SCSU advantage. Five minutes later in a role reversal, Blake Lizotte returned the favor by backhanding the puck through the slot to a wide-open Jackson who one-timed it on one knee into an open right side of the net. This was Jackson’s 11th goal of the season. Not done yet in the period, first-year defenseman Nick Perbix (Newell) added his second goal of the season at 19:28. Working down low behind the Miami net, Perbix shed a few defenders and slammed a wraparound past Larkin for a 5-0 Husky lead. Miami lost top-scorer Josh Melnick who was assessed a 10-minute misconduct at 19:28 of the period.

Period Three
With the game out of reach, the RedHawks did spoil David Hrenak’s bid for his fourth shutout of the season with a goal by Gordie Green, his 10th of the year on the power play at 12:26 of the third period. Grant Hutton took a shot from the point and Green was there to bury the rebound to spoil the shutout. Miami did have a shot advantage of 8-5 in the final period of play.

Coaches | Player Comments
“I’m really proud of the team” said coach Larson. “I thought we had a great response with everything we asked for from last night. It was close to our best 60 minute perfrmance that we’ve had. We challenged some guys before the game and the guys we challenged stepped up and had a good night. It’s good to get a response like that out of your team.”

Concerning some of the depth players getting into the lineup coach Larson commented “It’s fun to see some guys that work so hard everyday and don’t get to play much and Will Hammer is one I’m thinking about right now. They are glue guys that keep the team together. They work hard every day and have a great attitude and to see them get rewarded for playing well was fun”.

On Patrick Newell and his 100th career point “I love that kid ” said coach Larson. ” He plays the right way all the time and he’s skilled and obviously he can skate. He’s so smart in the way he plays.” Said Robby Jackson “I’m so proud of him man. I feel as happy as when I got 100 points. He’s worked so hard. This year he’s reaping the rewards, the fruits of his labor. I don’t know what to say other than he deserves it. I think it’s a joke he’s not up for the Hobey.”

Game Notes
SCSU outshot Miami 36 to 17 for the contest with the RedHawks Ryan Larkin stopping 31 shots on goal. The Huskies David Hrenak stopped 16 of 17 shots and notched his 16th win of the season to see his record improve to 16-3-1. SCSU had a successful game on the man-advantage scoring twice in six opportunities. The RedHawks converted once in four opportunities. SCSU had the advantage in faceoffs 30-21 with Will Hammer leading squad with seven faceoff wins in nine faceoffs. The Huskies had 61 shot attempts in the game vs 34 for the RedHawks.