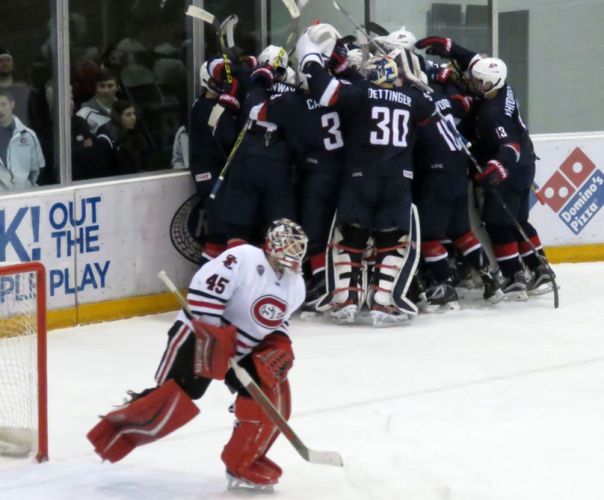 St. Cloud, MN – The #1 ranked SCSU Huskies return to home ice in an exhibition vs the USA U18 team on Thursday, December 27, 2018. This tune-up with the U18’s will launch the Huskies into the second half of the 2018-19 season and help prepare them for a new year’s tournament in Pittsburgh, PA on January 4-5. The Huskies currently sit in first-place in the highly competitive National Collegiate Hockey Conference (NCHC) leading second place Western Michigan by seven points. Additionally, the Huskies are currently ranked #2 in the Pairwise Comparison Ratings, a statistical tool used to approximate the process for selecting teams to the NCAA tournament. the Huskies return to league action on January 11/12 in an important series in Duluth vs the UMD Bulldogs.

the Huskies hosted the Omaha Mavericks at the HBNHC on December 7 and 8th. Although the scoreboard did not reflect it on Friday, the Huskies put forth a dominating effort out shooting the Mavericks 38-18, winning 61% of the faceoffs and limited them to an average of six shots per period in the 2-0 shutout win. SCSU netminder David Hrenak earned his 9th win and second shutout of the season. On Saturday, the misery continued for the Omaha Mavericks getting blitzed 7-1 and losing their seventh consecutive game to the Huskies.The Mavericks knotted the game 1-1 early in period two but then saw the floodgates open as the Huskies scored six consecutive goals to bury the Mavs and finish the 2018 conference schedule with an impressive 6-0-2 record. In contrast to Friday’s contest, the Huskies were seemingly scoring at will as Omaha netminder Evan Weninger was repeatedly left to face an onslaught of Huskies offensive attacks. On this night, thirteen SCSU players had at least one point and four had a multi-point game. Blake Lizotte, who had an outstanding game led the Huskies with two goals. The two NIcks – Perbix and Poehling each had two assists and Patrick Newell who was carrying the puck with confidence all night had a goal and an assist. And, David Hrenak who played both games allowed only one goal in the series and improved his record to 10-0-1.

The USA team last played on December 19th vs USHL opponent the Muskegon Lumberjacks at USA Hockey Arena in Plymouth, MI and prevailed with a 5-1 win. Owen Lundmark and Matthew Boldy each scored twice and Cameron Rowe made 31 saves in a game that saw Team USA outshoot the Lumberjacks 37-32. The teams last NCAA opponent was on December 16th facing the Lake Superior State University Lakers of the Western Collegiate Hockey Association. USA was upended 7-3 in the contest at USA Hockey Arena. Warren Marshall, Ryder Rolston and Cole Caufield scored for USA and Cameron Rowe allowed 5 goals in the loss.

The Huskies are 2-1-1 all-time vs the National Team Development U18 Program. They last met on January 3, 2016 with Team USA earning a 7-6 overtime win at the Herb Brooks National Hockey Center. Photos from the previous game are here

The National Team Development Program (NTDP) was started in 1996 by USA Hockey as a way to identify elite ice hockey players under the age of 18 and centralize their training. The team is based in Plymouth, MI. The stated goal of the NTDP is “to prepare student-athletes under the age of 18 for participation on the U.S. National Teams and success in their future hockey careers. The team plays games domestically against opponents in the United States Hockey League (USHL) and the National Collegiate Athletic Association (NCAA), as well as three international tournaments.

The NTDP has a 5-5-1 record vs NCAA teams thus far this season including wins over Michigan, Harvard, Dartmouth, Maine and Notre Dame.

The USA team will be without two of their top players – forward Jack Hughes currently leading the team in with 48 points (10-38-48) and goaltender, Spencer Knight (2.40 GAA | .922 SV%) both of whom were recently announced to the final roster for the Team USA World Junior squad.

In addition to Hughes, the team is led offensively by forwards Trevor Zegras (Boston University) 13-27-40, Cole Caufield (Wisconsin) 22-8-30, Matthew Boldy (Boston College) 17-12-29, and Judd Caulfield (North Dakota) 6-15-21. The goaltender for the game vs SCSU is expected to be Cameron Rowe, a North Dakota commit who was also on the Huskies radar. Rowe currently carries a 3.46 GAA and .882 SV%.

Team USA has outscored their opponents by a 131 to 87 margin, Other relevant team statistics are as follows:

The #1 ranked Huskies have had a highly successful start to the 2018-19 season. With a 13-1-2 record and with quality wins both on the road and at home there is little to complain about. They are excelling on both ends of the ice and ranked second in the nation  in offense and third in defense. Special teams have been strong –  second nationally on the penalty kill and 6th on the power play. Seniors are providing tremendous leadership, there is balanced scoring, the first-year class is contributing and despite some inconsistently, both goaltenders are getting the job done. They are undeniably one of the top collegiate teams in the country right now.

Currently, the Huskies are the third-ranked defense in the nation allowing only 1.81 goals per game.  Led by All-American, Hobey Baker finalist, pre-season All-NCHC pick and captain, Jimmy Schuldt (5-10-15 +6), alternate captain and senior Jon Lizotte (1-3-4 +8), and talented puck mover Jack Ahcan (2-11-13 +13), this diverse unit of defenders is one of the top threesome in college hockey. Add to the group, sophomore, Luke Jaycox (1-1-2 +6) and a talented group of newcomers – Brendan Bushy (+4) , NHL draft choice Nick Perbix (+12) and local native Spencer Meier (+4) and you have one of the most talent-laden defensive units in college hockey. Unfortunately, sophomore, Tyler Anderson, another solid contributor sustained an upper body injury vs Mount Royal and may be out for another two weeks. The entire unit is plus 53 and not a single regular is in the minus.

The Huskies are currently ranked second in the nation on offense with a lot of depth at forward and seniors Robby Jackson, Patrick Newell and Jacob Benson have experienced loads of success during their time at SCSU. They’ve experienced a Frozen Faceoff Championship, a Penrose Cup and have been a part of two NCAA tournament squads. Pre-season all-league NCHC pick Robby Jackson, a 21 year-old senior led the Huskies in scoring in 2017-18 and currently is second in team points with 16. Jackson will join the 100 point club this season. Senior Patrick Newell is an experienced forward being counted on to be a leader this season. Skilled and tough along the boards for his size he’s finally filling out physically which has helped his game this season. He currently leads the forwards with 10 goals and 20 points. Senior Jacob Benson was named alternate captain and he has 2 goals and four points in 16 games.

Montreal Canadiens first-rounder, Ryan Poehling has 16 points in 14 games and was just named to  the 2018-19 USA World Junior team. The Poehling twins, Jack and Nick along with Kevin Fitzgerald are preferably matched against the opponents top line. They’ve combined for 21 points.Sophomore Blake Lizotte made the NCHC All-Rookie team last season and is one of the most exciting forwards in college hockey. He currently has 15 points in 16 games. Easton Brodzinski is another member of the 2017-18 NCHC All-Rookie team and it was well-deserved. A natural goal scorer with a wicked wrist shot he netted 14 goals his rookie season and tends to score in bunches. He has 8 goals and three game-winning goals and 4 power play goals. Sophomore Kevin Fitzgerald was a surprise as a rookie earning 38 games of playing time and skating with the Poehling twins contributes to a relentless forecheck. He has 7 goals including one game-winner.

Minnesota Wild draft choice Sam Hentges and Nolan Walker are already prominent contributors to the lineup. Walker has an outstanding shooting percentage of 33.3% and Hentges 25%. Hentges and Walker have combined for 10 goals and 24 points and both are making a serious case to make the NCHC all-rookie team.  Micah Miller is another talented newcomer that will be battling for ice time and has shown increased confidence and strong puck control in his last several outings.

With senior Jeff Smith and sophomore David Hrenak, the Huskies have one of the top one-two punches at goaltender in college hockey. Hrenak has yet to lose a game, is 10-0-1 and has a 1.81 GAA and a .919 SV% and two shutouts. Smith has split time with Hrenak and is 3-1-1 with two shutouts and outstanding 1.78 GAA and .929 SV%.

Nationally, the Huskies statistics are as follows:

the Huskies will be returning from holiday break and most likely will have an on-ice practice earlier the day of the contest with the USA team. Think of this exhibition as a solid tune-up prior to the following weekend’s Three Rivers Classic in Pittsburgh, PA. The Huskies will be sure to be tested by a team that has a .500 record vs NCAA Division teams this season. These games always seem to be a competitive match-up against an elite group of Under 18 USA players with most committed to Division I hockey teams for the 2019-20 season.

Expect to see both David Hrenak and Jeff Smith sharing duties in goal for SCSU as they’ll both need game action after the holiday break. I expect that Cameron Rowe will be the starter for Team USA for this game. SCSU will be missing Ryan Poehling as he’ll be skating for Team USA in the World Junior Championships as will top forward Jack Hughes and goaltender Spencer Knight for the NTDP.

All the links for this game can be found HERE