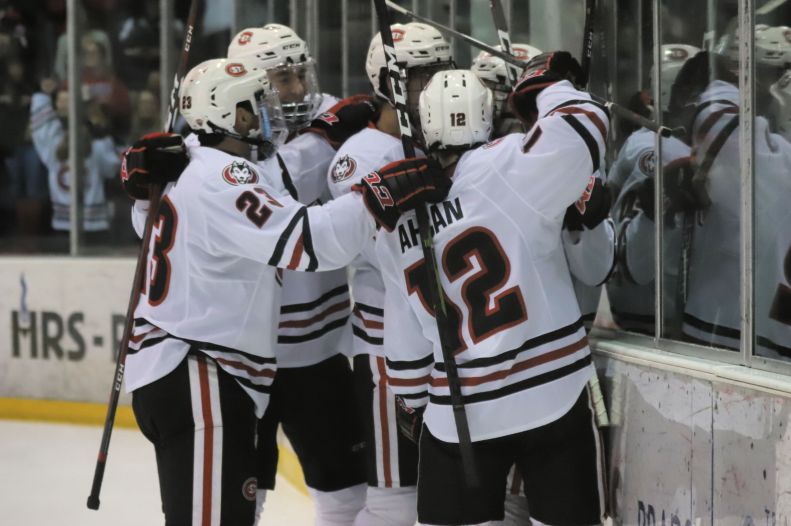 St. Cloud, MN – The National Collegiate Hockey Conference is cultivating some high-test rookies and several were on display at the Herb Brooks National Hockey Center in St. Cloud on Friday. Of the seven goals scored, five were by first-year players including two by SCSU’s Nolan Walker and one each by Denver’s Cole Guttman, Emilio Pettersen and Brett Stapley. In the end, it was Nolan Walker and his Huskies that prevailed in an early season conference battle between the #2 ranked Huskies and  #5 ranked Denver Pioneers. The two squads led by first-year head coaches David Carle of Denver and Brett Larson of St. Cloud gave the crowd of 4000 an exciting and fast paced contest and an early look at a half-dozen first-year forwards that should make a run at the NCHC All-rookie team this season. Between Walker and Hentges of St. Cloud and Guttman, Pettersen and Stapley they’ve combined for 18 goals. For the winning Huskies, Walker was the leading scorer on the night with 2 goals and an assist for three points. The win improved the Huskies to an overall 8-1-0 record and 3-0-0 in the NCHC placing them in first place in the early season standings. Denver who entered the series 5-0-1 suffered their first loss of the season.

Denver got off to a good start with an early first period goal by former SCSU commit Cole Guttman at 9:21. Guttman entered the SCSU zone, used Jimmy Schuldt as a shield and sent a low wrist shot that beat David Hrenak stick side for a 1-0 Pioneer lead. But, it didn’t take long for the Huskies to respond as Walker knotted the game at 1-1 just 1:13 later. A turnover in the neutral zone placed the puck on Ryan Poehling’s stick and he carried it wide placing a pin-point goal mouth pass that was tipped in by a charging Walker for his 4th goal of the year. The Pioneers again gained a one-goal lead as another first-year player, Brett Stapley netted his second goal of the season at 17:01. Stapley converted a breakaway with a nice forehand backhand dangle that beat Hrenak clean for a 2-1 Pioneer lead. In a period in which the Huskies probably deserved a better fate than being down 2-1 outshot the Pioneers 15-10.

A minute into the second period Jimmy Schuldt was whistled for interference and Denver wasted no time scoring as another first-year player, Emilio Peterssen added his 4th goal of the season just 32 seconds after the Schuldt penalty. Peterssen’s shot from the left point found its way through traffic for a 3-1 Pioneer advantage. SCSU’s three-goal comeback then commenced with Walker’s second goal of the game at 2:14 of period two. SCSU’s first-year defenseman, Brendan Bushy placed a shot from the left point and once again, Walker was there to deflect it in to narrow the Denver lead to 3-2. This was Walker’s 5th goal of the season. Walker then had a hand in the next goal as well as he and Patrick Newell fashioned a nice give and go with Walker threading the puck on goal and Newell tipping it past Cooley for his 7th goal of the year. In a period thoroughly dominated by the Huskies, they then added the game-winner at 15:50 by Jimmy Schuldt ( Jackson | J Lizotte ) on the power play. With the Pioneers Liam Finlay penalized for hooking, the Huskies scored almost immediately – 4 seconds later to be exact to take their first lead for the game at 4-3. SCSU outshot the Pioneers 15 to 6 in the second period and the shot differential was truly an indication of how much the ice was tilted in their favor that period.

The Huskies did have to withstand nearly a minute and a half of a Denver two-man advantage to start the third period as a result of penalties to the Huskies Kevin Fitzgerald (tripping) and Jon LIzotte (cross-checking) but they prevailed and were able to ride out the balance of the third period outshooting Denver 9 to 8. With the comeback intact, the Huskies won their third consecutive game by a 4-3 final.

Coaches Comments: “After being down 2-1 our team showed a lot of character and made it through a tough point in the game and got better and better.” said coach Larson. We’ve asked them to keep playing the way they’ve been playing. We are starting to build trust with each other and stay with the game plan. That was one of the fastest games we’ve seen all year. That was a really good hockey game.” Concerning the play of Nolan Walker Larson commented ” Walker is jelling with Ryan Poehling and Robby Jackson. He’s getting some minutes with some pretty good players and he’s getting the job done.”

SCSU outshot Denver 39 to 24 for the contest and had a 39 to 22 advantage in faceoffs. SCSU was 1/5 on the power play while the Pioneers converted one of their three opportunities. The Pioneers were whistled for 5 penalties for 10 minutes while SCSU was penalized 3 times for 6 minutes. Devin Cooley (5-1-1) stopped 35 of 39 SOG for his first loss of the season. SCSU’s Hrenak turned aside 21 of 24 shots and improved his record to 6-0-0.

The teams complete their series with the drop of the puck at 6:07 PM on Saturday.