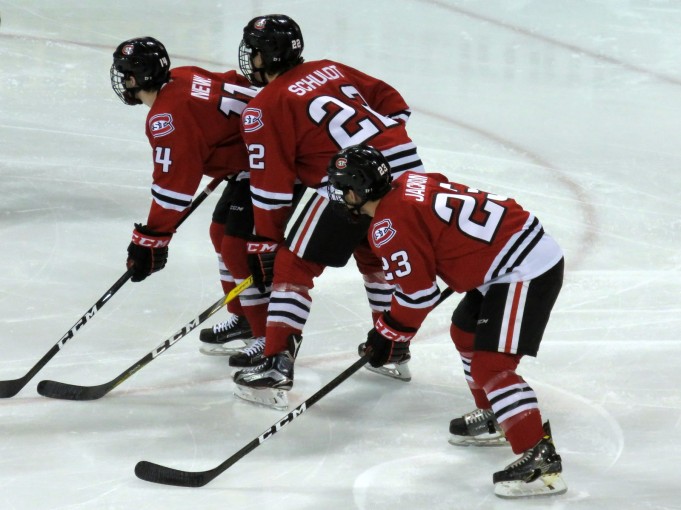 St. Cloud, MN- The announcement by senior to be and SCSU hockey captain Jimmy Schuldt on April 30th that he would be returning for his final season was met with a sigh of relief by Husky nation. Never one to draw a lot of attention to himself Schuldt stated simply “Junior year in the books. Exited for one more…”.  This set off a flurry of relief and excitement by SCSU hockey fans on social media to see the Top Ten Hobey Baker finalist turn his focus from an early signing in the NHL to that of trying to win a national championship for SCSU. One comment on Twitter that caught my eye was from long-time Husky fan Tom Pajunen who commented ” Jimmy Schuldt is quite the young man. What a role model for young players everywhere. Showing education, team and commitment come first. I am sure he has some proud parents”. Even SCSU Assistant Coach Mike Gibbons couldn’t contain his enthusiasm tweeting “Wow! What a player, what a leader”. Schuldt’s decision mirrors that of former outstanding Denver University defensemen, Will Butcher, a Hobey Baker winner in 2016-17 and currently with the New Jersey Devils. Butcher also opted to remain with the Pioneers for his senior season and led the Pioneers to a NCAA championship in 2017. Schuldt told the St. Cloud Times  “In my heart the whole time, though, I knew this was the right spot for me for another year. I want to get my degree and try to win a national championship. We have a chance to do that I think we have the team for it.” He’s also a shoe-in to make the 100 point club at SCSU as he’ll be entering the 2018-19 season with 83 points (28 goals, 55 assists).

It was also a sigh of relief for newly installed SCSU head coach Brett Larson who considered Schuldt his top recruit heading into the 2018-19 season. He told the St. Cloud Times “From a selfish side, I was really, really hoping he’d be back. There’s not a lot of holes in his game. He’s a power-play guy, kills penalties, can go against another team’s top line, he has good size and skating ability … He’s good on the offensive and defensive side of the puck. He’s truly a complete player.”  Like the ballast on a ship, Schuldt’s commitment to the SCSU hockey program will be invaluable heading into the upcoming season. The three-year captain is an exemplary player on the ice but beyond that, his respect and influence in the locker room is immeasurable as the team adjusts to the coaching change and a transition to a new era in SCSU hockey.

Beyond the Schuldt announcement, other examples of good news for the Huskies is the commitment of top-flight recruits Nolan Walker of the Sioux Falls Stampede and Sartell, MN native and Fargo Force defenseman Spencer Meier to the SCSU hockey program. Walker, an explosive USHL forward finished the 2017-18 season with 50 points in 55 games and will be an impact player this season much like Blake Lizotte and Easton Brodzinski were in their rookie season in 2017-18. He told me ” I did meet with the whole staff and I couldn’t be more excited to start my journey at St. Cloud! I’ve heard nothing but great things about Larson and St. Cloud. Can’t wait to get going. Really think we have a legit shot at winning at natty champ.” It was recently reported by Mick Hatten of the Times that Meier, another outstanding defenseman would be keeping to his National Letter of Intent to the Huskies. Either a 2018 or 2019 addition to the squad, Meier, a 6’4″190-pound defensemen with an offensive flair had 34 points in 59 games for the Fargo Force in 2017-18. It was also a positive sign to see SCSU recruit Brady Ziemer of Holy Family Academy affirm his commitment to SCSU by signing his National Letter of Intent on April 12th. Ziemer, a captain of the Holy Family squad is another future SCSU defenseman with a bright future. Other SCSU recruits, Micah Miller, Brendan Bushy, Nick Perbix and Nathan Burke all appear to be in the fold for the 2018-19 season.

Finally, the naming of Brett Larson as SCSU coach and the affirmation that long-time assistant coach and lead recruiter Mike Gibbons would be returning has been met with a great deal of positivity by the SCSU fan base. Since being announced as head coach on April 13th, Larson has done an exemplary job of positioning himself with the media, connecting with the fans and beginning to develop his relationship with the current roster of the Huskies. He’s completed his one-on-one meetings with all the players and again, there’s been nothing but positive feedback concerning those meetings.

The rumors have been swirling for some time that current assistant Garrett Raboin would be following former coach Bob Motzko to the University of Minnesota to join his staff and that former SCSU captain Nick Oliver would be returning to SCSU to replace Raboin. That announcement finally occurred on May 3rd when SCSU Athletic Director Heather Weems announced the hiring of former SCSU player and captain Nick Oliver to replace Garrett Raboin who will be moving on to the University of Minnesota. A clearly exited Oliver stated “I am humbled and honored for the opportunity to be returning to St. Cloud State. I have a deep passion for this University, Huskies hockey and all of the people surrounding the program. I am eager to learn and work with Coach Larson and Coach (Mike) Gibbons and all of our players. This is a special program and I am excited to be coming back to a place I consider home.”

Finally, It would be naive to think that SCSU will retain all of their non-NLI recruits. It’s human nature to have loyalty to those that have recruited you and you’ve developed a relationship with. Time will tell if there will be any flipping of SCSU recruits.

What is encouraging is the momentum that is clearly occurring with SCSU hockey. It’s a good sign for a program that was filled with uncertainty in early April. The program is currently in good hands and exciting times are ahead for the fans.