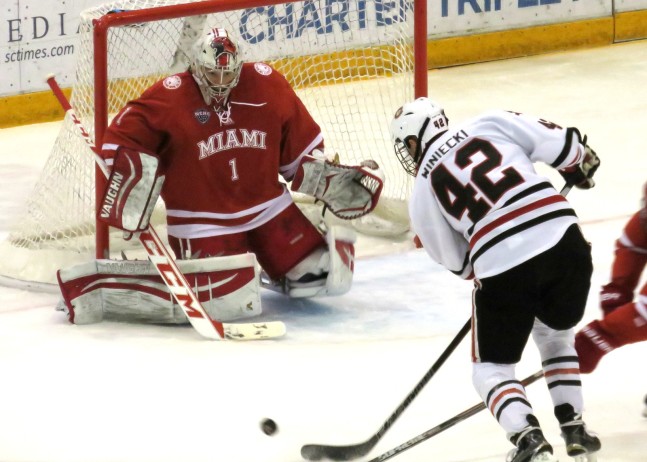 St. Cloud, MN – The Huskies begin two weekends on the road with a trip to Oxford, Ohio to face the Miami RedHawks. With first-place Denver idle this weekend this is a prime opportunity for SCSU to move up in the standings and take over first-place in the National Collegiate Hockey Conference. SCSU currently is three points back of the Pioneers in the standings but has played two less games. They’ll be facing the last-place team in the conference but don’t be deceived by that. There is tremendous depth in the NCHC and Miami is another team that has the ability to give the Huskies fits this weekend. SCSU is 3-4-2 on the road thus far this season.

Miami split a home weekend with the Western Michigan Broncos winning 4-2 on Friday and getting edged 3-2 on Saturday. Miami leveraged a three-goal second period in the series opener in the win. Grant Hutton’s 10th goal of the season was the game winner and Ryan Larkin stopped 20 of 22 shots in earning the win. Miami outshot WMU 28-22. In the rematch, Miami jumped out to a two-goal lead in the second period only to see the Broncos rally for three consecutive goals in that same period to edge the RedHawks 3-2. Ryan Larkin stopped 13 of 16 shots on goal but faced zero shots on goal in the third period.

Sometimes you gotta grind out a win.  The Huskies did just that on Friday overcoming a three-goal performance by Omaha’s David Pope to post a 5-3 win at the Herb Brooks National Hockey Center.  The Huskies scored three times in period two and received goals from five different players in improving their conference record to 10-4-1 (16-6-3 overall). SCSU outshot Omaha 42-18 for the game and David Hrenak stopped 15 of 18 shots on goal. Huskies with a multiple point game included Robby Jackson (1-1-2), Jack Ahcan (0-2-2), Jimmy Schuldt (0-2-2), Judd Peterson (1-1-2) and Nick Poehling (1-1-2). On Saturday, the sharing continued as six different players scored in the 6-2 victory. Blake Lizotte scored the game-winning goal , Mikey Eyssimont has a three-point night and Jeff Smith captured his 10th win of the season stopping 24 of 26 SOG.

The RedHawks finished in seventh place last season and have struggled to improve their position despite having six returning defenseman and 14 newcomers from last season with a year under their belt. The new year has not been kind to the RedHawks with a 2-5-1 record although they are 2-2-0 at home in that span. For the season, they are currently 7-7-0 on home ice. Of concern is that even with six returning defenseman, the defense is ranked 52nd in the country with a negative scoring margin. It’s very tough in the NCHC to win when you are allowing 3.35 goals per game. The offense is scoring 3.12 goals per game which theoretically should provide you with success but again, the porous play on defense is erasing the success on offense. The lone bright spot is the Miami power play ranked #2 in the country with a success ratio of 27.5 %. The success rate is even better since January 1st converting an outstanding 29.5%.  The penalty kill is another story – ranked 47th in the nation at 78.45% and even worse since January 1st allowing a success rate by their opponents of 30%.

The RedHawks entered the season counting on juniors Kiefer Sherwood, Josh Melnick and Carson Meyer to lead the charge. However, sophomore Gordie Green has stepped forward leading the team in goals and scoring with 11-17-28 including 2 game-winning goals. Josh Melnick a crafty and clutch performer has 8-18-26 with 3 GWG. Kieffer Sherwood is also a top four forward with 6-14-20. The RedHawks expected more out of Carson Meyer after a 10-16-26 season a year ago. He currently sits with 9 points. Touted recruits and sophomores Karch Bachman and Willie Knierin have also been disappointments combining for 12 points and just 4 goals on the season.

On defense, senior Louie Belpedio, a Minnesota Wild draft choice is the heart and soul of the unit and has been very productive offensively with 10-16-26, a +4 ranking and 6 power play goals. Grant Hutton is also having an outstanding year from an offensive standpoint with 10-10-20 including 8 power play goals. Scott Dornbrook is another seasoned veteran that helps round out the unit.

Sophomore goaltender, Ryan Larkin has seen his numbers dip from last season and has been the go to guy in goal appearing in 26 games. However, his 3.08 GAA and .884 SV% are a reflection of the marginal play by the RedHawk defense.

Despite a sweep of Omaha last weekend, the Huskies still have some issues to work out. Nationally, the team statistics are pretty impressive with the offense ranked 2nd at 3.81 and the power play ranked 9th at 23.33%. But, if you drill things down since January 1st, the offense, while still very productive averaging 3.33 goals per game is allowing the same number of goals defensively. That’s a concern. The power play has been an anemic 17.9% and the penalty kill also struggling allowing a 30% success rate by its opponents. The team simply won’t survive the playoffs if those numbers don’t improve. One bright spot is the Huskies are trending towards their usual position of being one of the least penalized teams in college hockey currently ranked 47th  averaging 10.23 penalty minutes per game.

Junior forward Robby Jackson has emerged as the team leader on the scoring chart with 12 goals and 17 assists for 29 points edging Mikey Essiymont with 11-17-28. Eyssimont was named NCHC offensive player of the week following his 2-2-4 performance against Omaha. Jackson has been one of the most consistent players as of late with seven points in the last nine games. Jimmy Schuldt continues to lead the defense in scoring with 27 points. Ryan Poehling has also been consistent offensively with 5 points in his last 6 games. Easton Brodzinski continues to lead the rookies in scoring with 10 goals and 6 assists for 16 points.

Defensively, again, the Huskies are led by team captain Jimmy Schuldt and his play on both ends of the rink. Schuldt has propped up the defensive units plus/minus with his +18 while the unit as a whole is +49. However, the defense will have to survive the loss of Will Borgen to the Olympic games. Borgen is a key component to the penalty kill, logs a ton of minutes and is perhaps the Huskies best defensive player. His physical presence on the ice can be disruptive and /or intimidating to the opponent and his absence will be sorely missed. This will probably require Jon Lizotte to log additional minutes on defense. Borgen’s loss will also provide opportunity for additional ice time for Tyler Anderson, Mika Ilvonen and Clark Kuster.

After having emerged as the teams #1 goaltender, first-year player David Hrenak has had his issues lately with a save percentage of 85% over the last six games. And even though his seasons numbers have dipped they are still solid at 2.12 GAA and .922 SV%. The slip in play by Hrenak has given opportunity to Jeff Smith and he responded with a win vs Omaha last Saturday improving his record to 10-2-3 with a respectable 2.51 GAA and .913 SV%. But, this just means the Huskies are still in limbo when it comes to identifying their go to goaltender and that’s going to be important down the stretch run.

This could be a dangerous series for the Huskies. Historically, the Huskies have not fared well in Miami losing the last two games there and having a 4-5-0 all-time record in Oxford. Although it’s been a disappointing season for the last-place RedHawks, they have had quality wins over #3 Pairwise Denver, #4 Pairwise Cornell and #12 Pairwise UMD. There is some talent on this team from an offensive standpoint and the power play is one of the best in the country.

The Huskies have to stay out of the penalty box this weekend. Miami is 9th in the nation in penalty minutes per game. That could be a key factor in this series. SCSU needs to contain junior forward Josh Melnick who has 6 goals in 6 games vs the Huskies and  Grant Hutton who has 8 power play goals this season.

SCSU needs to continue their aggressive offensive zone forecheck and attack on the net. Saturday’s game vs Omaha was a good example of how successful they can be when they play that way. Less perimeter play and more drive to the opponent’s goal. They need to be committed to positionally sound defensive play especially with their top defender, Will Borgen out of the lineup.

I expect both goaltenders to play this weekend. It’s going to be important for them to step forward this weekend. Better goaltender play is at a premium this time of year.