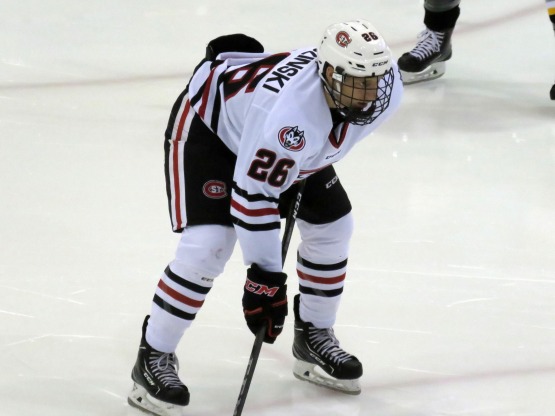 St. Cloud, MN – If you look at the  national statistics for scoring, you won’t find a player from St. Cloud State in the top 30. What you will find is 19 of the 22 players (excluding goaltenders) have at least one goal. It’s that depth that carried the Huskies this weekend in their home sweep of the #10 Pairwise Omaha Mavericks. In Friday’s win, five different Huskies scored in the 5-2 win. On Saturday, the sharing continued as six different players scored in the 6-2 victory. The sweep allowed SCSU to keep track of league leading Denver who also swept the Minnesota-Duluth Bulldogs at home.  The Huskies remain three points back of the Pioneers but have played two less conference games. With eight conference games remaining this could be setting up a huge series vs the Pioneers in St. Cloud on February 23 and 24.

The Huskies struck early in this contest  with a power play goal by Robby Jackson (Ahcan | Eyssimont) 4:56 into the contest. Ahcan fed Jackson who was stationed in his sweet spot and he wristed the puck top shelf past Evan Weninger for a 1-0 SCSU lead. After withstanding a Omaha power play, the Huskies scored again at 18:53 with Mikey Eyssimont’s 11th goal of the season. With intense pressure in the Omaha zone Kevin Fitzgerald placed a shot on goal that rebounded to Eyssimont and he buried it for a 2-0 SCSU lead. SCSU also had another goal waved off due to an off-side call. SCSU outshot Omaha 15-10 in the period.

A mere 1:44 into period two Blake Lizotte (Fitzgerald | Eyssimont) made up for his previously waved off goal scoring his fourth goal of the season. On a two on one, Fitzgerald made a nice drop pass to Lizotte who one-timed it past an out of position Weninger for a 3-0 lead. But, Omaha rallied in the second with two goals to narrow the score to 3-2. First, Riley Alfred beat Smith with a stoppable shot from 15 feet out at 2:10 and then with the Huskies a little on their heels Zach Gordon scored four-minutes later on a tap-n at the goal mouth for a 3-2 score.  Jake Wahlin (Jaycox | Newell) who had five points in the previous series with Omaha upped the Huskies lead to 4-2 with a goal at 12:09. Jaycox took a shot from the blue line that rebounded off the back wall to Wahlin who tucked  the puck between Weninger and the post. Will Borgen (Schuldt | R Poehling) then got into the act at 16:45 with his second of the year. Schuldt slid the puck cross-ice to Borgen who unloaded a cannon from the point to up the SCSU lead to 5-2. SCSU outshot Omaha 16-9 in period two.

SCSU capped things off in period three with Easton Brodzinski’s 10th goal of the season. Ryan Poehling charged the Omaha goal and left a nice drop pass for Brodzinski who beat Weninger for the 6-2 final. The Huskies again outshot Omaha 10-7 in the final period.

SCSU outshot Omaha 41-26 for the game and 83-44 for the series. The Huskies turned around their struggling power play converting on both of their opportunities.Omaha was stunted on both of their power plays. SCSU won the faceoff battle 47-33. Evan Weninger stopped 35 of 41 shots on goal while Jeff Smith turned aside 24 of 26. Smith’s record improves to 10-2-3.