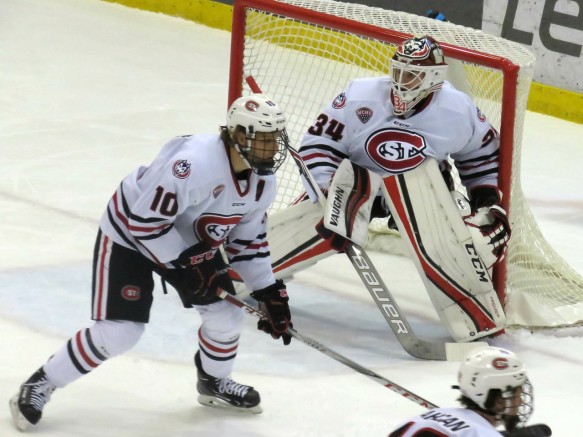 St. Cloud, MN – The SCSU Huskies are leaking oil and they need some repairs.  Since January 1, the #5 (USCHO) | #3 (US College Hockey/USA Today) Huskies are 2-3 including two losses on their home ice. If we go back to the Princeton series to end calendar year 2017 they are 2-3-2. They took another punch to the gut on Saturday in front of a near capacity crowd celebrating Hockey Day Minnesota in St. Cloud with a disturbing 5-2 loss to the WCHA’s MSU Mavericks. For the Mavericks, it was sweet revenge giving the Huskies some pay back for a 4-0 loss on their home ice to start the 2017-18 season. The difference? This is the time of the season when a team needs to gain some rhythm and start playing some of their best hockey of the season. The Mavericks seem to be moving in the right direction. The Huskies are not. Junior forward Robby Jackson commented that “Right now, it’s work ethic and compete”. That’s concerning.

It didn’t take the Mavericks long to get on the board scoring just 1:33 into period one on a goal by Connor Mackay, his third goal of the season. Mackay’s backhand off a rush into the SCSU zone beat Jeff Smith short-side for a 1-0 Mavericks lead. MSU extended their lead by two goals on the power play at 13:56. A defensive foul-up allowed Zeb Knutson to get behind the SCSU defense off a pass by Daniel Brickley from the Mavericks defensive zone and he beat Smith glove side for a 2-0 advantage. The Huskies finally found some life at 18:55 of period one on Jon Lizotte’s third goal of the season. A nice pass from Blake Lizotte to Patrick Newell converted to a feed to a charging Lizotte who beat the Mavericks LeCouvee to narrow the lead to 2-1. Shots on goal were 8-8 aside for the session.

The second period began with more defensive struggles as the Huskies yielded the puck to Reggie Lutz who made a deft move feeding rookie Jake Jaremko with a behind the back pass who tapped it past Smith for a 3-1 Maverick lead. However, the Huskies responded once again with a goal by Robby Jackson (R Poehling | Easton Brodzinski), his 10th goal of the season. A rink length rush had Ryan Poehling finding Jackson in his sweet spot in the left faceoff circle beating LaCouvee with a wrist shot upper right corner to again narrow the Mavericks lead to 3-2.  But, the Mavericks offense again found success with Zeb Knutson’s second goal of the contest at 15:00 of period two. A shot from the point ended up on Reggie Lutz’s stick and he slid it across the crease to Knutson who beat Hrenak who was in relief of Jeff Smith for a 4-2 lead. The Huskies were outshot 11-9 and outscored 2-1 in the period.

With urgency at hand behind by two goals, the Huskies found it tough sledding to get anything past LaCouvee despite outshooting the Mavericks 13-9 in the period. The Huskies had a man-advantage opportunity 12 minutes into the period but failed on their second power play of the contest.  The Mavericks put an exclamation mark on their win with an empty net goal by C. J. Suess at 19:43 for the 5-2 final.

The Huskies outshot the Mavericks 30-26 for the contest and were 0/2 on the power play while Mankato converted on their only opportunity. Jeff Smith and David Hrenak combined to stop 21 of 25 MSU shots on goal. Connor LaCuovee turned aside 28 of 30 SCSU shots on goal.

SCSU’s record falls to 14-5-3 heading into a key NCHC showdown with the surging UMD Bulldogs at Amsoil Arena this weekend. The win gives the Mavericks their 18th victory of the season. They face UMD in a rare Tuesday night matchup in Mankato on January 23.