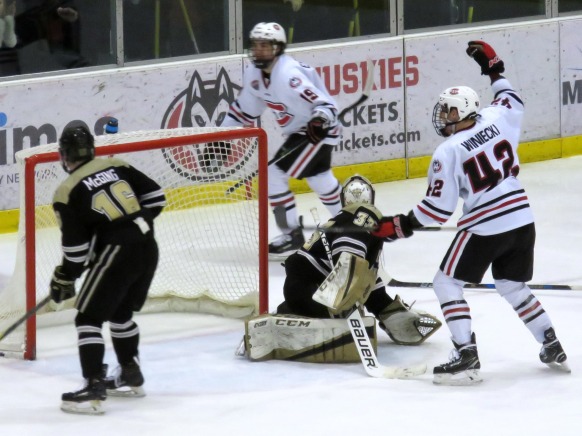 St. Cloud, MN – Easton Brodzinski scored the game-winning goal with 4:28 remaining in regulation to allow the Huskies to salvage a split with the Western MIchigan Broncos on Saturday, January 13th at the Herb Brooks National Hockey Center. SCSU outshot the Broncos 40-16 and used a little more discipline in earning this crucial league win over third place WMU. The win allowed the Huskies to maintain a four-point lead over WMU and three points over North Dakota in the NCHC standings. All three teams have played an equal number of league games.

After a very frustrating loss to the Broncos on Friday, the team held a post-game closed-door session obviously due to the coaching staffs displeasure with the lack of discipline and number of penalties yielded in the loss. With some lineup changes and David Hrenak given the nod in goal, the Huskies came out flying and spent nearly the first five minutes of the period in the Western MIchigan zone. A hooking penalty to the Broncos Lawton Courtnall gave the Huskies an early advantage however they were unable to convert for the seventh consecutive man-advantage carrying over to Friday’s game. A roughing call to Will Borgen at 18:07 gave the Broncos their opportunity and they cashed in getting a power play goal by Dawson DiPietro with 6 seconds remaining in the period for a 1-0 advantage. SCSU outshot WMU 9-6 in the period.

Blake LIzotte, who had been good all weekend,  finally evened things up with his third goal of the season at 8:32 of the second period. Lizotte (J Lizotte | Mikey Eyssimont)  started the play with a feed to Eyssimont who placed the puck on goal. Jon Lizotte backhanded the rebound which ended up on Lizotte’s stick who sent a backhand past WMU’s Blacker to tie the game at 1-1. A power play for the Huskies at 12:41 turned into a disadvantage as some sloppy play by the Huskies led to a short-handed 3X1 with Paul Stoykewych getting an unassisted goal at  14:22 for a 2-1 WMU lead. But, the Huskies did respond  a little over three minutes later with Ryan Poehling’s 6th goal of the year. With all three Poehling brothers on the ice, Jack Poehling carried the puck into the WMU zone and curled at the right faceoff dot and fed brother Ryan who tapped it past Blacker to knot the game at 2-2. In a very dominant period the Huskies outshot WMU 18-5 yet were still knotted at 2-2 at periods end.

With penalties to Paul Washe at 4:09 and a major penalty to Cam Lee at 5:26 for charging SCSU goaltender David Hrenak and putting him out of the game, the Huskies were given the opportunity to take the lead with some extended power play time. They finally found success on their 7th man advantage of the game with a goal by Mikey Eyssimont at 5:50 of period three. A shot by Jimmy Schuldt on net rebounded to Eyssimont who one-time a  shot past Blacker to give the Huskies a one-goal lead at  3-2. The Huskies had an additional 4:24 on the penalty to Cam Lee to extend their lead but once again they struggled to convert on the man-advantage. With Nick Poehling whistled for cross checking, the Broncos converted their second power play of the game at  11:14 with Corey Schueneman’s third goal of the season to tie the game once again at 3-3. But, on this night the heroics went to first-year forward Easton Brodzinski who scored the game-winning goal at 15:32. Brodzinski was the recipient of a nice feed from Mikey Eyssimont who found Brodzinski between the dots and he wristed it past Blacker for the 4-3 final. In another dominant period by the Huskies, they outshot the Broncos 13-5.

SCSU outshot the Broncos by a 40-16 margin. In a tough night for the SCSU goaltenders, Hrenak allowed 2 goals on 9 shots while Jeff Smith who replaced Hrenak five minutes into period three allowed 1 goal on 5 shots. Bronco goaltender Ben Blacker had a busy game turning aside 36 of 40 shots on goal. The Huskies struggled on the power play converting 1/7 opportunities while the Broncos were successful on both of their power play opportunities. Two SCSU players had a multi-point game with Mikey Eyssimont (1-2-3) and Blake Lizotte (1-1-2).