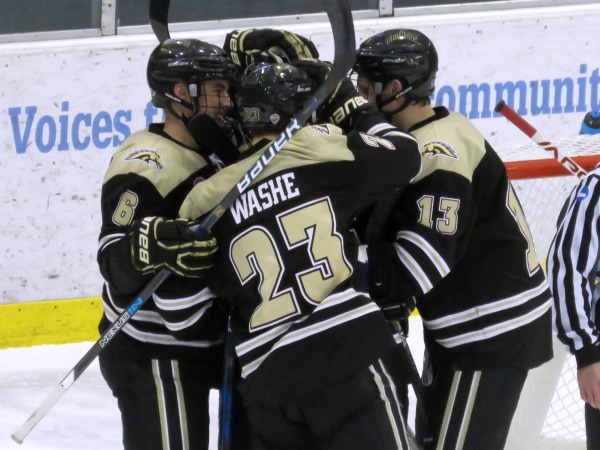 St.Cloud, MN – A seemingly comfortable 3-1 lead after one period suddenly collapsed as #12 Western Michigan University rallied for four goals in period two en route to a 7-5 win at the HBNHC on Friday, January 12. In a penalty-filled affair, the two teams combined for 17 penalties for 37 minutes in a game bordering on chippy at times. Give credit to the Broncos, they played a physical high-energy game matching the Huskies speed and showed why they have one of the top-ranked offenses in college hockey. The loss which was the Huskies first on home ice this season also has them 2-2-3 in their last seven games causing one to believe some team self-evaluation is in order to get things on track as they finish conference play with a very tough schedule in the last 12 games. Despite the loss, the Huskies remain tied with North Dakota for the conference lead and a precarious one-point lead over Western Michigan.

The explosive Broncos scored early off a turnover by the Huskies at 4:22. Luke Bafia snared a tunover and found  Hugh McGing down ice and sent him in all alone on Jeff Smith beating the SCSU goaltender for an early 1-0 WMU lead. But, the Huskies responded a little over a minute later on an extra attacker goal by Judd Peterson (Winiecki | Borgen) with his third goal of the season. On a delayed penalty call, Blake Winiecki centered the puck off the left wall to the goal  mouth and Peterson tipped in for a 1-1 game. With WMU’s Cam Orchard off for hooking the Huskies again capitalized on the power play at 12:26 with Robby Jackson’s 8th goal of the season. Jackson (Schuldt | Eyssimont) fielded a pass from Schuldt and wristed a shot from his sweet spot at the top of the left circle that beat Blacker high for a 2-1 SCSU lead. The Huskies capitalized on another man-advantage at 17:38 on a goal by Blake Lizotte. Planted in the right slot, Lizotte (Ahcan | Poehling) swept in a rebound off a shot by Jack Ahcan for a 3-1 SCSU advantage. SCSU outshot the Broncos 12-7 in period one but most importantly capitalized on the first 2 of 3 power play opportunities in the period.

Western Michigan set the tone early in a period totally dominated by the Broncos with a power play goal by Hugh McGing just 14 seconds into the period to narrow the lead to one goal. But, the Broncos were just starting with another power play goal by Corey Schueneman at 5:30 to tie the game at 3-3. Jade McMullen’s goal knocking a rebound past Smith at 8:40 spelled the end of the game for Jeff Smith being replaced by David Hrenak in an attempt to stop the WMU rally with Broncos leading 4-3. But, it didn’t end there with Stillwater, MN native Neal Goff sending a shot from the point past Hrenak for his first goal of the season and a 5-3 Bronco advantage.  Western Michigan badly outshot the stunned Huskies 13-5 in the period and scored on their first two power play opportunities of the period.  The SCSU power play failed on all four second period power plays including a four-minute assessment on Hugh McGing at 14:34 and a 5X3 advantage at 16:37 failing to get anything going on the power play without a shot on goal.

Undisciplined play by the Huskies ate up seven minutes of the third period with an unsportsmanlike penalty and then a five-minute penalty to Jimmy Schuldt for interference. SCSU again couldn’t convert on their sixth straight man-advantage at 12:57 leaving them little time for a third period rally. SCSU pulled Hrenak with a little over two minutes to play but it backfired with Lawton Courtnall getting an empty net goal at 18:49 for a 6-3 lead. With the extra attacker Blake Winiecki (Brodzinski | Ilvonen) beat Blacker with a wrist shot from the top of the right circle at 19:33 to make it 6-4.  But, twelve seconds later Courtnall added his second empty netter of the night for a 7-4 advantage. The persistent Huskies added another at 19:58 when Jackson put  a shot off the back wall that went over the net and deflected in of a WMU player for the 7-5 final. SCSU’s attempt to rally had them outshooting WMU 14-8 in a period  that had each team trade two goals apiece.

The loss also caused SCSU to slip from #1 to #3 in the all important Pairwise rankings.