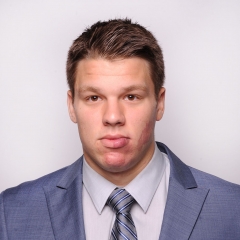 St. Cloud, MN –  SCSU added a big body and seasoned junior hockey player in St. Cloud native Will Hammer who has announced his commitment to play for the Huskies. The St. Cloud Cathedral graduate announced via twitter on May 11 “Proud to announce my commitment to SCSU. It’s been a long journey! Thanks to everyone who helped me along the way.” Long journey may be an understatement as Hammer put in three years and 169 games in the NAHL between the Aberdeen Wings and Minnesota Magicians prior to commiting to the Huskies.

The 6’2″ 200 pound forward had four successful years of hockey for the St. Cloud Cathedral Crusaders playing in 100 high school games compiling an impressive 65 goals and 80 assists for 145 points. His contributions helped lead the Crusaders to the Class A Minnesota State High School hockey tournament in 2014 finishing in fourth place. Hammer was named captain of his Cathedral team his senior season and was named the St. Cloud Times All Area Player of the Year. However the offense did not come easily at the next level adding just 9 goals and 24 assists for 33 points in 109 games for the Aberdeen Wings. He found more maturity and production in his game after being traded to the Minnesota Magicians by Aberdeen for the 2016-17 season. With the Magicians, Hammer once again found his offensive game netting 18 goals and adding 23 assists for 41 points in 60 games while playing for former SCSU goaltender and head coach Scott Meyer.

The 20 year old will join the Huskies this fall and should assume his role as a big, strong forward that can help the Huskies offense.