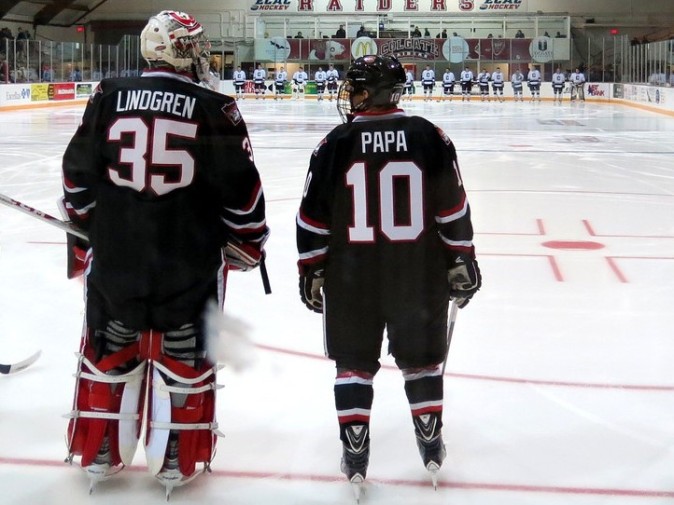 St. Cloud, MN – The Huskies noted their third departure in the past week as Ryan Papa has announced his intentions to the St. Cloud Times and the SCSU coaching staff of his desire to transfer to American International College of the Atlantic Conference. It was indicated that Papa will complete his four-year degree in May at St. Cloud State but will still have one year of eligibility remaining. It would require him to enroll in graduate school to be eligible for this additional year of play.

Papa, a 5′ 7″ 174 pound forward from Prospect Heights, IL joined the Huskies for the 2013-14 season after being recruited from the Waterloo Black Hawks of the United States Hockey League. Papa racked up 34 goals and 38 assists for 72 points in 104 games. His most productive year for the Huskies  was his first appearing in 37 games and compiling 6 goals and 16 assists for 22 points. He took a red shirt year in 2014-15 due to injuries and returned in 2015 but again had some injury issues and thus was used sparingly scoring two goals and three assists. During the 2016-17 season, he appeared in 20 games adding one goal and six assists for seven points. A good student, Papa earned NCHC all-academic team honors in 2016-17.

At AIC, he will join first-year head coach Eric Lang who took over for long-time American International coach Gary Wright who stepped down after the 2015-16 season. The Yellow Jackets finished 10th out of 11 teams in 2016-17 with a 7-14-7 conference record and 8-20-8 overall record and 54th out of 60 teams in the final Pairwise rankings.

Due to injuries and being in and out of the lineup, Papa never quite hit his stride for the Huskies but if healthy could certainly be a huge boost to the Yellow Jackets lineup and finish his college career on a positive note. Papa is an energetic and disruptive forward who has the ability as proven by his USHL statistics to be a solid offensive player.

Earlier, defenseman, Nate Widman decided to forgo an NCAA petition for an additional year and signed an ECHL contract with the Rapid City Rush of the East Coast Hockey League. On April 6, the Detroit Red Wings announced they had signed first-year defenseman Dennis Cholowski to a three-year Entry Level Contract.

Note: Papa would transfer under the NCAA Graduate Exception: