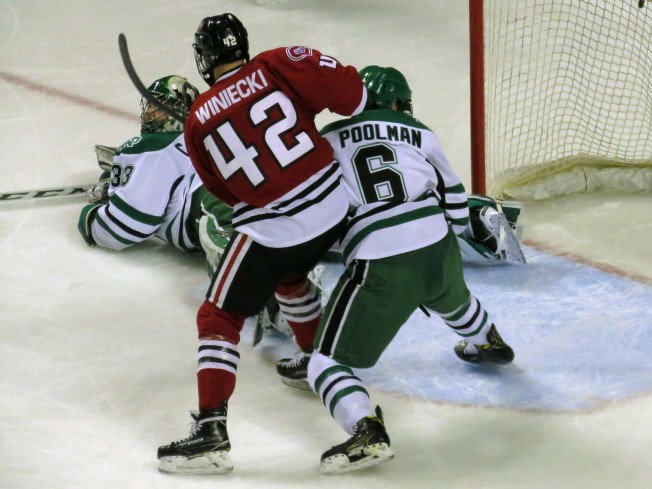 North Dakota is currently #11 in the Pairwise and SCSU is #18.

North Dakota earned a road sweep of the Miami RedHawks last weekend to lock down the final home NCHC playoff position. On Friday, UND rallyed for two goals in the second period by Tyson Jost and a short-handed GWG goal by Trevor Olson  in a 3-2 victory. The Fighting Hawks limited Miami to 16 shots and Cam Johnson stopped 14 of 16 RedHawk shots on goal in the win. In the Saturday rematch, North Dakota held MIami to 11 total shots on goal and Tucker Poolman had a five-point game in the 5-2 win and sweep. Once again, Trevor Olson netted the game-winning goal and Cam Johnson turned aside 9 of 11 shots on goal.

The Huskies split their final home regular series with the Colorado College Tigers with a 5-2 win on Friday and a tight 2-1 loss on Saturday. On Friday, SCSU scored the final four goals of the contest to break an early one-goal deficit in the 5-2 win. Four different players scored for SCSU with Jack Poehling getting the game-winning goal late in period one. Jeff Smith stopped 30 of 32 shots on goal in the win. On Saturday all the scoring occurred in period one in a very tight game. St. Cloud native Matt Hansen scored the game-winning goal on the power play in the 2-1 Tiger win. Alex Leclerc stopped 25 of 26 shots on goal in a solid effort. Jimmy Schuldt scored the lone SCSU goal in the first period on the power play.

UND lost nine players from last years National Championship squad including four seniors and five underclassmen and they are missing 217 points of offense from that group. Key losses included top scorers Drake Caggiula (25-26-51) one of the most dynamic players in college hockey and Nick Schmaltz, a terrific set-up man on their top line who had 11 goals and 35 assists. Along with Brock Boesser, it was probably the most feared line in college hockey and directly contributed to the demise of Quinnipiac in the Frozen Four championship game.

Early departures of Schmaltz and Luke Johnson at forward and veteran defenseman, Troy Stecher, Paul LaDue and Keaton Thompson have placed a big dent in the Fighting Hawks lineup. As a result, the Fighting Hawks have had an inconsistent season with a 13-12-2 record since November 1st and an 8-8-0 record since January 1. They have also struggled at home since the beginning of the year with a 3-5-0 record at Ralph Engelstad Arena.

Goal scorers Shane Gersich (19-15-34), Brock Boesser (13-15-28), and Austin Poganski (9-12-21) provide the offensive spark needed from their veteran players with Boesser one of the top forwards in college hockey. The defense is led by Tucker Poolman (7-21-28), Christian Wolanin and Gage Ausmus and all are solid players in their own right. In goal, Cam Johnson was one of the top netminders in college hockey last season with a .833 winning percentage with a 1.65 GAA and .935 SV%. Johnson has logged most of the minutes this season this season for UND. His current .905 SV% and 2.34 GAA do not rival last years numbers but again, this team lost a whole lot of defensive depth following the 2015-16 season. Johnson’s record is 17-11-3 with three shutouts.

The Hawks have done a nice job re-loading the team with some top-notch players that have had an impact in 2016-17:

Statistically, UND is 23rd in the country in offense at 3.11 goals per game and 19th in defense allowing 2.54 goals per game. The power play has had its struggles at 18.24% good for 33rd in college hockey. The penalty kill is ranked 15th out of 60 teams at 84.6%. UND averages 12.09 penalty minutes a game placing them 37th in that category

The fifth place Huskies were hurt in the first-half of the season by some marginal goaltending. However, since January that has been solidified but the current concern is generating enough offense to win the close game. Since January 1, the Huskies are 7-9-0 including 10 one-goal contests in which they’ve lost six of them. They’ve also been in six overtime games since the 1st of January losing 5 of 6 of those games. The root of the problem is the offense that allows as many goals per game as they are scoring – 2.88. They’ve also been highly consistent in failing to find a way to win on Saturdays. They are 6-10-1 on Saturdays this season and are 1-7-0 on Saturday since January 1st.

The coaching staff has used 40 plus different forward line combinations this season in attempt to find those magical line combinations. Unfortunately, it has not paid off with the team averaging 3.55 goals per game prior to January 13th and 2.42 goals per game since. Unquestionably, the Huskies goaltending and team defense has improved the second half of the season. Prior to the UMD series on January 13th, the Huskies allowed 3.20 goals per game. Since that time, they’ve allowed 2.42 goals per game. The goaltending and defense took a step backwards vs Denver two weeks ago allowing 11 goals in two games but rebounded to allow on 4 goals in two games vs Colorado College. Jeff Smith, who has started the majority of the games since January 13th, has been solid with the exception of a few games stopping 334 of 363 SOG for a .92 SV%.

Statistically, the Huskies goal differential is dead even allowing 2.88 GPG while scoring 2.88 GPG. Nationally, they are 31st in offense, 31st in defense, 22nd on the power play (19.67%) and 21st on the penalty kill (83.9%). They are the least penalized team in college hockey incurring 9.15 minutes a game.

Probably the biggest issue for the Huskies right now is finding some scoring to support the improved goaltending and defensive play they have been getting. Over 25% of the Huskies scoring has come on the man-advantage.

There are a lot of similarities between these squads entering this crucial series. Both lost loads of talent from their 2015-16 squads and it’s taking a toll on the teams in getting consistent results. North Dakota has the momentum after a crucial road sweep of Miami last weekend. On the other hand, the Huskies had much to play for in their last series with last-place Colorado College but lost a crucial game on Saturday 2-1. You would think North Dakota has the advantage on home ice. However, they are 3-5 at home since January 1st and were nearly swept by the Huskies in January earning a split with a 2-1 overtime win on February 4th.

Some other things to keep in mind:

If North Dakota is healthy they have more offensive firepower in their lineup than the Huskies. However, the Huskies held Gersich, Poganski and Boesser to just two assists in the last series at North Dakota. Tyson Jost did not play in that series. Duplicating that effort with continued strong play by Jeff Smith will bear fruit for the Huskies. Smith stopped 52 of 55 shots on goal (.94 SV%) in the last series at North Dakota and that will be necessary considering the lack of scoring punch by the Huskies. Keys for the Huskies will be to score early to keep the crowd out of the game and to squeeze any additional scoring they can out of their power play. With Will Borgen suspended for two games by the NCHC, the Huskies will be missing their most physical defender. The defense will have to be extra diligent in boxing out the top forwards of the Fighting Hawks.

Winning faceoffs in a close game will also be important for the Huskies. In the last series UND had the advantage 37-22 on Friday but SCSU had the 29-26 advantage on Saturday. UND attempts a lot of shots outshooting the Huskies 79-45 when the games were close last series. Once again, the SCSU defense needs to do a good job blocking shots and keeping UND on the perimeter. The Huskies blocked 40 shots in the last series.

Finally, the Huskies need to be tougher in the paint in order to generate more “blue collar” goals and thus more offense. Scoring 2.5 goals per game gives them little margin and as we know, close games generally favor the home team and overtime games have been a disaster for the Huskies this season. SCSU also needs to break the habit of losing on Saturday.

As far as injuries, SCSU senior defenseman, Niklas Nevalainen took a nasty run into the boards on Saturday and is day-to-day with a lower body injury. In the event he cannot play, the Huskies could be down to five defenseman. Word from North Dakota is that Austin Poganski, Brock Boesser and Hayden Shaw may all have some sort of injury. We’ll have to follow that to see if it will keep any of them out of the lineup this weekend.

Losing this series would most certainly end the 2016-17 season for the Huskies. North Dakota is currently on the bubble for an at large bid and two losses would most likely end their season as well. One of these two teams will move on to the NCHC Frozen Faceoff. Unfortunately, the tournament will be losing one of its two top fan bases with either SCSU or UND eliminated.

As always, all the pertinent links for this weekends games can be found here