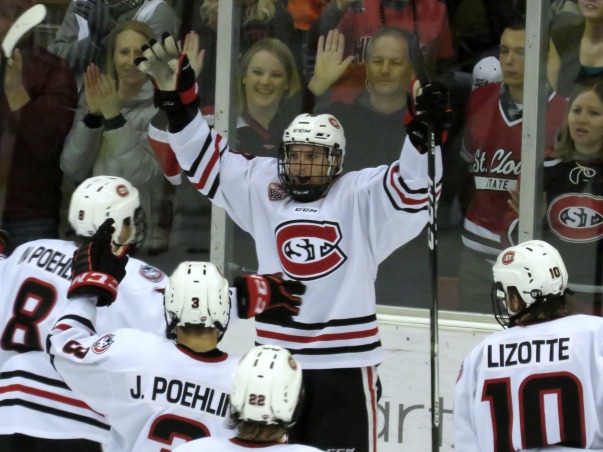 St. Cloud, MN – It wasn’t pretty at times and the last-place Tigers pushed back hard but in the end the Huskies prevailed with a two-goal third period and a  5-2 win at the Herb Brooks National Hockey Center on Friday, March 3. The win still gave hope for a home-ice playoff series for the Huskies despite the fact that North Dakota won on Friday and is in control of their destiny. A Saturday win by UND will have the Huskies on the road for the first-round of the NCHC playoffs.

It didn’t take the Huskies long to net the first goal with Jacob Benson (Tedesco | Lizotte) scoring his 10th goal of the season 2:15 into the contest. Daniel Tedesco put the brakes on in the right circle and made a cross-ice pass to Benson who wristed it over the blocker of Alex Leclerc for a 1-0 lead.  But, the Tigers responded immediately with the tying goal less than a minute later at 3:12. CC’s leading scorer, Mason Bergh netted his 14th goal of the season splitting the SCSU defense and beating Jeff Smith blocker side to tie the game at 1-1. The game Tigers then took the lead with a goal by senior Luc Gerdes at 6:36. Attacking the SCSU goal on a 3×1, Mason Bergh fed Gerdes who was positioned in the paint who slid the puck past an out of position Jeff Smith for a 2-1 lead. The lead held until the latter stages of the period when Nick Poehling (Ahcan | Schuldt)  tied the game at 15:25 with his first career goal as a Husky. Poehling made a nice re-direction of the puck off a shot from the point by Jack Ahcan to tie the game at 2-2. Not to be outdone by his twin brother, Jack Poehling (Lizotte | Borgen) tipped a shot from the point by Jon Lizotte at 17:30 to give the Huskies their second lead of the game at 3-2. Colorado College outshot SCSU 13 to 12 in the period.

A scoreless second period with each team trading 12 shots on goal led to the third period with the Huskies holding on to a precarious 3-2 lead. It wasn’t until a goal by Judd Peterson (J Poehling) at 16:11 of the third period that the Huskies were given some breathing room. Poehling, who did a nice job controlling the puck along the side wall threaded a nice centering pass to Peterson who one-timed a shot that skipped past Leclerc for a 4-2 SCSU lead. Finally, Daniel Tedesco (Benson | Storm)  got his goal on senior weekend at 18:01 to seal the win for the Huskies. Jacob Benson curled from behind the CC goal and made a goal-mouth pass to Tedesco who slid the puck past Leclerc for his second goal of the season and 5-2 final.

SCSU outshot the Tigers 34 to 32 for the game and also prevailed 37 to 29 on faceoffs. Jeff Smith added another win  to even his record at 10-10-0 stopping 30 of 32 Colorado College shots on goal. The Tigers Alex Leclerc took the loss while stopping 29 of 34 shots on goal. With the win, the Huskies again evened their overall record at 16-16-1. However, despite the win the Huskies Pairwise slipped from #14 to #15.

The teams meet for the final game of the NCHC regular season schedule on Saturday at 7:07 PM at the Herb Brooks National Hockey Center.

One thought on “Huskies Outlast the Tigers 5-2”