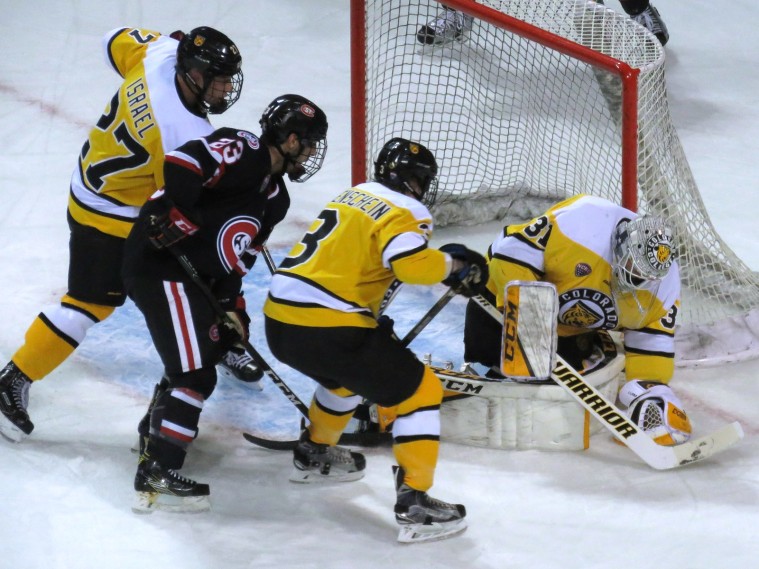 The Tigers hosted Western Michigan University last weekend skating to a 3-3 overtime tie on Friday and losing 5-1 in the Saturday rematch. CC outshot the Broncos 40-30 but yielded the game-tying goal at 1:14 of period three. The teams then skated to an overtime draw. In the Saturday rematch, the Broncos scored three times before the Tigers could get on the board in a dominating 5-1 win for WMU. Trevor Gooch scored the lone goal for the Tigers.

The Huskies had a disappointing weekend on the road in Denver losing in overtime 4-3 on Friday and getting drilled 7-2 in the Saturday rematch. On Friday, Judd Peterson scored his 10th goal of the season at 17:38 of period three to send the contest to overtime. The Pioneers salted the game away with a goal 3:44 into the overtime session by Henrik Borgstrom in a frustrating loss for the Huskies. On Saturday, the Huskies were dominated on the scoreboard from start to finish in the 7-2 thrashing. Mikey Eyssimont and Blake Winiecki scored for the Huskies. SCSU goaltender Jeff Smith suffered both losses in the sweep.

It’s been a tough stretch for former NHL assistant coach Mike Haviland as he tries to steer the Tiger program back to respectability. This is a program that averaged 27 wins a season from 2000 to 2005 but has only won 19 games total over the past three seasons (imcluding this season). Haviland’s record for his first two seasons was 12-55-4 but in winning seven games thus far in 2016-17, they’ve already won more than half the number of games his teams have won in each of the past two years. Their offense has improved slightly from 1.97 goals per game in 2015-16 to 2.03 thus far this season.

The offseason was not kind to the Tigers roster with senior Zach Aman deciding not to return to the ice due to concussion issues. He had played 50 career games for the Tigers. Additionally, last seasons part-time starter in goal, Tyler Marble and defenseman Jake Emilio decided not to return to the team in 2016-17. Emilio played 24 games last season and had five assists. Marble played in 40 games over the past two seasons. On the positive side, Westin Michaud, a forward from Esko, MN has returned to the lineup after missing the entire 2015-16 season due to injury. He was a 73 point scorer in the NAHL for Corpus Christi.

The Tigers have brought in 10 recruits for the current season and they have contributed with Alex Berardinelli (6-5-11), Branden Makara (3-5-8), Nick Halloran (5-4-9) all in the top ten in scoring currently. The defense is anchored by Junior Teemu Kivihalme, the only NHL drafted player on the Tiger roster who is currently seventh on the squad in scoring.  Of note, Teemu’s father Janne was a high school coach of SCSU first-year defenseman Jack Ahcan. Senior leadership at forward is provided by Luc Gerdes (5-11-16), Sam Rothstein (7-5-12) and St. Cloud native Matt Hansen (5-8-13). Last season’s leading scorer and sophomore Trey Bradley (0-6-6) suffered a broken collarbone in the teams series with Omaha in November and has only played two games since. Sophomore Mason Bergh leads the squad in scoring with 13 goals and 8 assists for 21 points.

The #19 ranked Huskies were beginning to make some noise the second half of the season until they were derailed by #1 Denver last weekend. Currently ranked #14 in the Pairwise, they’ve accomplished that rise with a strong strength of schedule and wins over #1 Denver, #2 UMD, #16 UND, WCHA league champion Bemidji State and their first conference home sweep of the season vs Miami. Getting swept by Denver last weekend eliminated a great opportunity to solidify their Pairwise position.

Unquestionably, the Huskies turnaround can be attributed to goaltending and team defense. Prior to the UMD series on January 13th, the Huskies allowed 3.55 goals per game. Since that time, they’ve allowed 2.50 goals per game. The goaltending and defense took a step backwards vs Denver last weekend allowing 11 goals in two games. Jeff Smith, who has started the majority of the games since January 13th, was cruising along at about a .93 SV%. However, last weekend vs the sharp-shooting Pioneers, Smith yielded 8 goals on 55 shots for a .85 SV%. Additionally, the defensive unit which has been very solid the second half of the season was a combined -12 for the Denver series

Challenges still remain on offense with the Huskies relying on their sophomore class to do most of the scoring. The sophomore class currently has 120 points consisting of 43 goals and 77 assists. Next is the Freshman class with 22 goals and 49 assists for 71 points. They are followed by the Junior class with 23 goals and 22 assists for 45 points and the senior class with 2 goals and 16 assists for 18 points. However, they’ve taken a step back since the first 18 games of the season scoring 2.21 goals per game vs 3.38 goals per game – obviously the strength of schedule has contributed to that.

Statistically, the Huskies goal differential is in the negative allowing 2.96 GPG while scoring 2.88 GPG. Nationally, they are 29th in offense, 33rd in defense, 16th on the power play (20%) and 23rd on the penalty kill (83.8%). They are the least penalized team in college hockey incurring 8.84 minutes a game.

This is a huge final regular season series for the Huskies. By the time the weekend washes out, the Huskies could be positioned anywhere from fourth place to seventh place (please see the chart below). Critical factors for the Huskies are keeping their overall record over .500 for eligibility in the Pairwise ranking and to solidify their position in the Pairwise. A sweep this weekend could place them as high as #12  in the Pairwise and a split as low as #17. Finishing in fourth place in the conference would allow the Huskies to host the first round of the NCHC playoffs next weekend.

Despite being winless in the month of February, the Tigers did earn overtime ties with #3 ranked UMD and #8 ranked Western Michigan. Much like the Huskies, the main concern for the Tigers is the lack of offensive punch. Additionally,special teams have had it’s issues and as mentioned the power play is currently at 11%. Despite his unimpressive numbers, first-year goaltender Alex Leclerc has the ability to put up a big game. Players to keep an eye on for the Tigers are forwards Mason Bergh, Luc Gerdes, Matt Hansen and Sam Rothstein. On defense, Teemu Kivihalme is a strong offensive defenseman who can move the puck well and skates well. Cole McCaskill is also solid back on defense. St. Cloud native Matt Hansen will be making his final trip to St. Cloud as a Tiger and I expect him to perform well this weekend.

The Huskies continue to struggle on the offensive end of the rink averaging more goals allowed than scored per game. As a result, it really places pressure on them to perform on the power play when they get the opportunity. The Huskies took a step backwards defensively last weekend vs #1 Denver and need to get their game back in order this weekend vs CC. A lot is on the line for SCSU and they’ll need a good effort in both games if they are to improve their chances for post-season play.

It’s never easy to sweep anyone in the NCHC but that’s the situation the Huskies are currently in.

As always, all the pertinent links for this weekends games can be found here 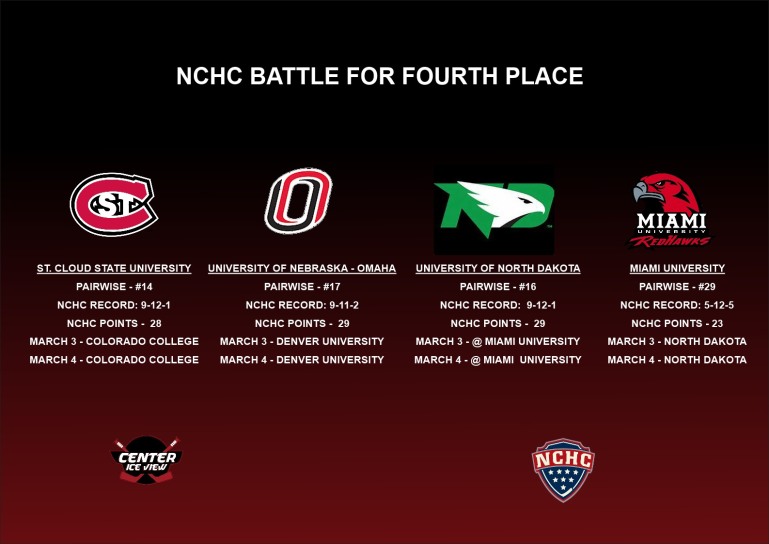