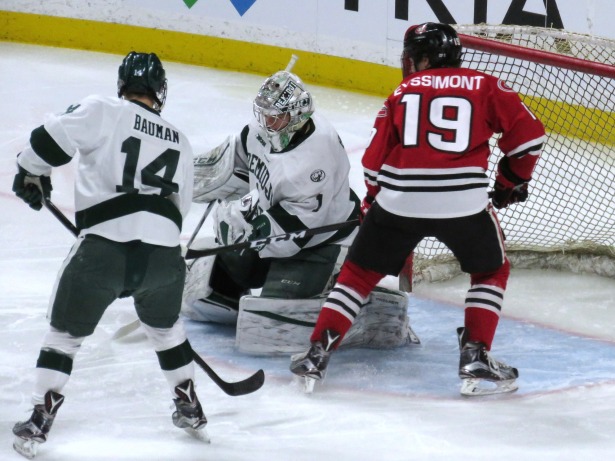 St. Paul, MN – The St. Cloud State University Huskies advanced to defend their North Star College Cup Championship after edging the Bemidji State University Beavers 2-1 at the Xcel Energy Center on Friday, January 27. The Huskies will face NCHC league rival UMD for the fifth time this season on Saturday at 7:00 PM CT. The Bulldogs advanced after posting a 3-2 win over the University of Minnesota in the nightcap.

In a tough battle with the highly defensive WCHA league leading Beavers, the Huskies scored first on the man-advantage at 6:01 of the first period. Jake Benson scored his seventh goal of the season with assists to Blake Winiecki and Jack Ahcan. Ahcan threw the puck on goal from the blue line and it was slapped on goal by Winiecki who was positioned in the crease. BSU’s Bitzer made the save but the rebound ended up on Benson’s stick who steered it past Bitzer for a 1-0 SCSU lead. SCSU outshot the Beavers 11 to 9 in period one.

Despite being outshot 10-2 by the Beavers in period two, the Huskies scored the lead goal of period two to extend their advantage to 2-0. Once again, Blake Winiecki was a key player picking up his 11th goal of the season with assists to Nick Poehling and Mikey Eyssimont. Poehling tossed the puck off the side wall to the front of the goal and Winiecki was able to put it through the pads of Bitzer for the two-goal lead. But, the resilient Beavers kept attacking and it paid off with Zach Whitecloud getting a nice goal at 17:35 to narrow the lead to 2-1. Whitecloud carried the puck into the SCSU zone uncontested and ripped a wrist shot past Jeff Smith from the top of the circles for his second goal of the season.

With the two teams battling to a scoreless third period, BSU pulled goaltender Bitzer for the extra attacker but Brendan Harms was whistled for boarding at 18:08 to derail the Beavers attempt to tie the contest. Shots were dead even in the final period at 8-8.

Bemidji State outshot the Huskies 27-21 in the contest and SCSU’s Jeff Smith stopped 26 of 27 shots on goal to even his season record to 6-6-0. BSU’s Bitzer turned aside 19 of 21 shots in the loss with his record going to 16-9-3. The Huskies were 1 for 4 on the power play against college hockey’s top penalty kill unit. The Beavers were 0 for 3 in their man-advantage opportunities.

The Huskies advance to the championship game of the North Star College Cup for the second consecutive year. They face the UMD Bulldogs at 7:00 PM CT on Saturday.

The University of Minnesota’s futility against in-state rivals continued on Friday as they dropped the nightcap 3-2 to the University of Minnesota-Duluth Bulldogs. The Gophers took a first period lead on a goal by Brent Gates Jr but UMD rallied for the next three goals and then held on for the 3-2 win. UMD goals were by Riley Tufte, Alex Iafallo and Avery Peterson (GWG). Hunter Miska was sharp in goal stopping 37 of 39 Gopher shots.