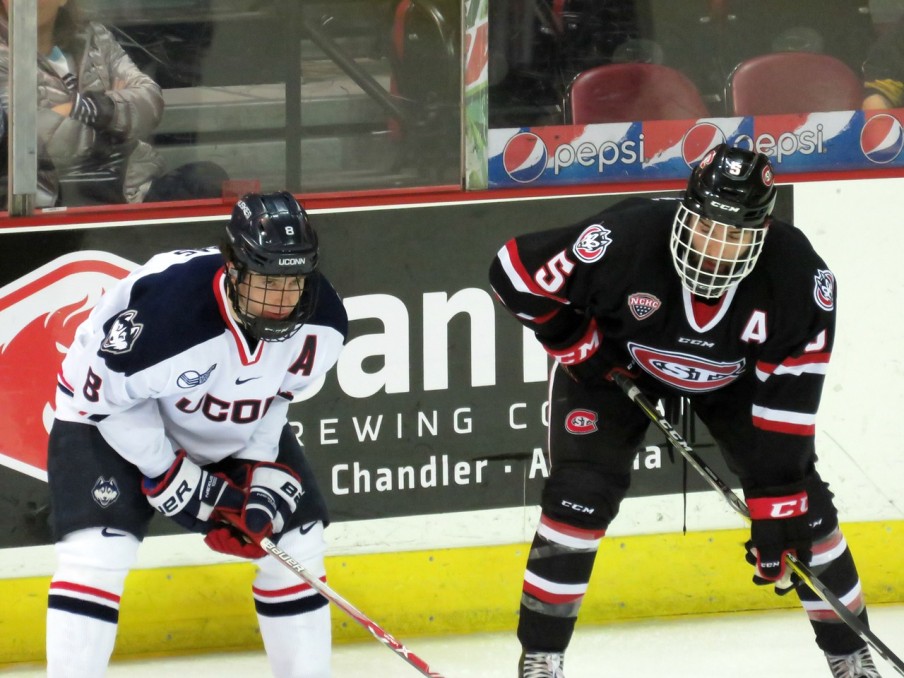 Prescott Valley, AZ – The Huskies closed out calendar year 2016 participating in the Arizona State University Desert Classic on December 30 and 31. Why in Prescott Valley which is about 90 miles from Phoenix or 100 miles from Tempe? The best I could gather is they’ve had a decent alumni following in the area in the past and a decent size facility (about 5,000) available for the tournament in the Prescott Valley Events Center. This was the previous home to the Arizona Sun Dogs of the Central Hockey League who departed Prescott Valley in August of 2014 after the merger of the ECHL and the CHL.

With an elevation of about 5,000 feet, there is a significant deviation in temperature as opposed to Phoenix or Scottsdale. We certainly experienced that during the tourney with temperatures in the low 50’s and rain both days in the area. In checking the weather history from the 2015 tourney, I found the weather was slightly cooler – in the upper 40’s. That in itself is a major drawback for this tournament. For those of us from Minnesota, we left temperatures in the 30’s for a respite from the cold temperatures only to find un-Arizona type weather for the weekend. The field of teams was fairly weak with Brown (#55 PWR), Arizona State (#47 PWR) and Connecticut (#23 PWR). The resulting attendance from the box scores was listed at 1153 for the SCSU | UCONN game and 814 for SCSU’s third place game with Arizona State.

In what was felt to be a good warm-up for the SCSU Huskies as they enter the second half of the season turned out to be a rather marginal result for a team attempting to gain momentum as they head into a competitive part of their conference schedule. Currently sitting at #17 in the Pairwise and in fourth place in the NCHC standings, the Huskies need to gain some momentum if they expect to host the first round of the NCHC playoffs in St. Cloud. They gained little momentum in Arizona dropping the tournament opener to Connecticut 4-3 and then struggling to defeat host Arizona State in the third place game.

Granted, UCONN had two quality wins this season over a loaded Boston University squad by a 4-0 score on November 19 and UMass-Lowell by a 3-2 score on December 2nd. However, both wins were on the heels of some outstanding goaltending by Adam Huska who was competing in the 2017 World Junior Tournament and not available to the Huskies for the Desert Classic. UCONN was outshot 37-20 vs BU and 33-21 vs Lowell and Huska had an obnoxious combined .97 SV % in those contests. They were also missing Tage Thompson, their top goal scorer who was also competing in the World Junior Championship.

A very uneven effort by the Huskies in the opener vs UCONN  found them battling to play catch-up in the game and never holding a lead in the contest. Falling behind 2-0 early in the second period, the Huskies eventually battled back to even the score at 2-2 on a goal by Blake Winiecki at 17:36 only to see Minnesota native Spencer Naas erase that a minute later with his 9th goal of the season. UCONN stretched the lead to 4-2 on another goal at 14:45 of the third and a power play goal by Jacob Benson was too little too late in the 4-3 final. UCONN backup Rob Nichols stopped 91% of the SCSU shots on goal while SCSU starter Jeff Smith stopped 86% of the UCONN shots. SCSU coach Mike Gibbons summed it up pretty well commenting “We had some key defensive lapses that you can’t give to a team like Connecticut.” And, therein lies one of the Huskies problems this season – a solid core of defensemen that have a tendency to have lapses that cost the Huskies dearly. That, in combination with too much individual play and a goaltending effort at 86% will rarely lead to success.

In the third place game, the Huskies found themselves cruising along with a 3-0 lead until ASU scored twice within two minutes to put a genuine scare into the Huskies. Once again, defensive lapses proved costly and had the Huskies struggling to hold off the #47 Pairwise Sun Devils who had a power play for the last 1:39 of the game.

There were several bright spots over the weekend. The Penalty kill continues to be superb continuing a streak of six games and 22 opponent man-advantage opportunities without a goal. Robby Jackson, who tends to be a streaky offensive player added three goals (one EN) vs ASU. Jackson has six goals on the season but they need more production out of him if they are to have success the second half of the season. The Poehling line can never be questioned about their effort game in and game out. The line only produced one goal but in my opinion was the top line for the Huskies all weekend. Their work ethic and team play sets them apart from the other lines in my opinion. Eventually, their effort will pay off and start producing more scoring for the team.

The Huskies travel to Miami this weekend for a key NCHC series with a team that is 5-8-5 on the season,1-4-3 in the conference and with only 18 conference goals. The Huskies need to have success vs the seventh place Redhawks. SCSU ‘s schedule following Miami includes 8 games with UND, Denver and UMD.

Due to this teams inconsistency, I have a hard time trying to figure out which team will show up on a given night. The talent, skill and depth is there. The offense needs to be more consistent and they need to eliminate the defensive lapses that come back to haunt them. Granted, this is a young team with goaltending that is a work in progress. Playing 7th place Miami this weekend will be a good gauge as to where this team is currently at. The schedule is simply too tough down the stretch to give up points to teams that are beneath them in the standings.

A preview of the Miami series will follow later this week.