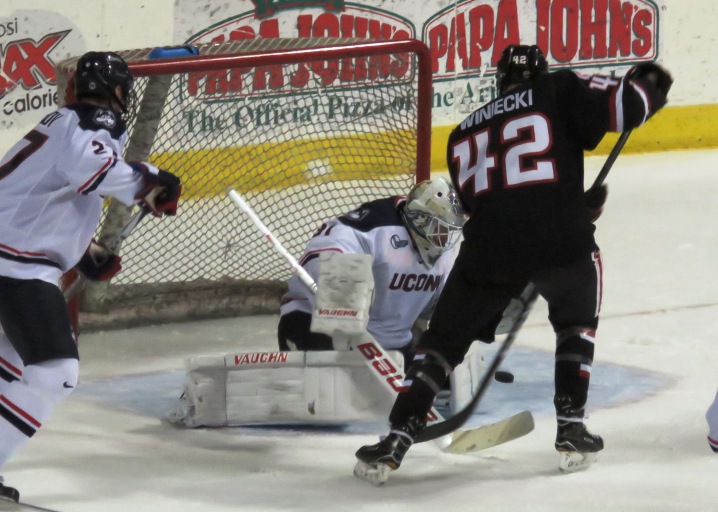 Prescott Valley, AZ – SCSU started the second half of the 2016-17 season on a sour note dropping the opening game of the ASU Desert Classic Hockey Tournament to unranked Connecticut 4-3 at the Prescott Valley Events Center on Friday, December 30th.  UCONN jumped to an early lead in the contest and the Huskies had to play catch-up the entire game in the one-goal loss.

The Connecticut Huskies traveled to the tournament sans their two top players – Tage Thompson, their leading scorer and Adam Huska, their top goaltender but nevertheless persevered against the ranked Huskies who were also missing first-year defenseman, Jack Ahcan. However, it could be argued UCONN was at the bigger disadvantage losing Thompson and his 12 goals including three game-winning goals and Huska who was 4-2-3 and carrying a 2.28 GAA and .935 SV%. Thompson and Ahcan are skating for SCSU coach Bob Motzko and Team USA in the World Junior Tournament while Huska is competing for Team Solvakia.

UCONN scored first in the contest at 4:20 of the first-period on a goal by Minnesota native and former Benilde – St. Margaret’s player Spencer Naas who picked up his first of two goals on the night. Naas fired a wrist shot from the left circle that beat Smith high for his 8th goal of the season and a 1-0 Connecticut lead. This was the only scoring in period one with SCSU outshooting UCONN 12-9.

The Huskies Miles Gendron stretched the lead to 2-0 on a goal just 37 seconds into period two off a two on one rush into the SCSU zone. It took SCSU ten minutes to finally get on the board on Mikey Eyssimont’s ( Newell | Winiecki) 9th goal of the season at 10:38. Patrick Newell threw the puck on goal through traffic and Eyssimont was able to tap it past the Huskies Rob Nichols. Blake Winiecki (Newell) then tied the game at 2-2 with his 8th goal of the season at 17:36. Newell fed Winiecki who was at the right half-wall who beat Nichols with a wrist shot. However, Connecticut responded slightly over a minute later on Spencer Naas’s second goal of the game at 18:40 for a 3-2 UCONN lead. Naas tapped in a goalmouth feed from Max Kalter for his 9th goal of the season and another one-goal lead. Once again, SCSU outshot UCONN 13-12 in the period.

SCSU entered the third period with greater urgency and were clearly at the offensive advantage but it was UCONN who added to their lead on a goal by Maxin Letunov at 14:45 of period three. Letunov drove into the SCSU zone one on one with Will Borgen putting on the brakes and wristing a shot top shelf past Smith for a 4-2 UCONN advantage. SCSU pulled Smith with 2:03 remaining and while on a two-man advantage closed the score to a goal on a power play by Jacob Benson with assists from Mikey Eyssimont and Blake Winiecki. SCSU applied more pressure and won several key face-offs in the waning seconds but were unable to get the equalizer in the 4-3 final. SCSU once again outshot the Huskies 11-9 in period three.

SCSU outshot Connecticut 36 to 30 for the game and killed both UCONN man-advantage opportunities in the contest. SCSU was 1 for 4 on the power play. Jeff Smith stopped 26/30 SOG in the loss and saw his record fall to 2-3-0. Rob NIchols turned aside 33/36 SCSU SOG in improving his record to 3-3-3. Blake Winiecki led the Huskies offense with 1-2-3 and Spencer Naas scored twice for UCONN.