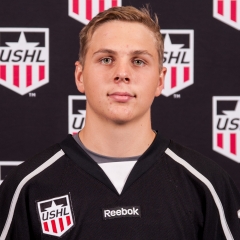 St. Cloud, MN – If you do an internet search of Division I college hockey players from Lindstrom, MN you find one or two. By this time next year there will be another – Blake Lizotte. But, as the old saying goes, it’s quality not quantity and in this case it’s another high quality Division I recruit for St. Cloud State University and coach Bob Motzko. Lizotte is currently competing for Team USA in the 2016 World Junior A Challenge in Bonnyville, Alberta making this a good time to do an update on this future Husky. A year ago, the Huskies had three players in this tournament – Jake Wahlin and Jack Ahcan for Team USA and Dennis Cholowski for Canada West. Not bad company if grouping only by association. However, in this case, the recognition Lizotte is getting not only in the USHL but on the International stage is well deserved for the time and hard work he’s put in on the ice and the impression he leaves everywhere he plays.

For instance, Neutral Zone, a leading source on NCAA player rankings recently listed Lizotte as the 4th top North American NCAA eligible prospect out of 600 that were born in 1997. That’s a pretty good ranking for a player who just two years ago was invited for a two-month “train and play” stint with Minot of the North American Hockey League. Plans were to return to his Chisago Lakes High School team where he had compiled 67 points on 19 goals and 48 assists in 50 games the previous two seasons. Turns out, he never left the Minotauros and in 2014-15 he posted 14 goals and 38 assists for 52 points in 56 games. Coincidentally, it turned out the SCSU  coaching staff had their eye on Minot teammate and current Husky, Jon Lizotte (no relation) as a late recruit for the 2015-16 season. With a keen eye for uncovering talent, coach Motzko and staff saw the potential in this relatively unknown Lindstrom, MN hockey star and landed a verbal commitment in January of 2015.

Following his successful 2014-15 season where he finished with 52 points, +27 and 10th in the NAHL in assists with 38, Lizotte was selected as the fourth overall pick in phase 2 of the 2015 USHL Draft by the Fargo Force. Not missing a beat, Lizotte continued his strong offensive play in the highly defensive USHL racking up 46 points in 54 games in 2015-16 season. Currently wearing the “C” for Fargo, he exploded for five assists in his first game this season vs Omaha and has 24 points in 21 games so far in 2016-17 placing him 7th in the league. All of this leading to being selected to the USA Team for the 2016 World Junior A Challenge. Lizotte has three assists through four games for Team USA in the tourney.

Academically sound and not averse to hard work, Lizotte gains the respect of his coaches wherever he plays. Former NHLer, Marty Murray, who coached him in Minot told the St. Cloud Times in a 2015 interview “When you watch him, you notice his play-making ability and his hockey sense is off the charts. He does stuff you can’t teach. What separates him from a lot of players is his compete level is very strong and his heart on the ice is exceptional. He doesn’t back down. He has the ability to spin off people and is fun to watch. He’s always thinking the game and is one step ahead of it.” Current Fargo Force coach Cary Eades told USAHockey.com “He’s a hard worker and he’s very consistent and really reliable. He’s quietly a leader and inspiration in how hard he plays for his size. You can’t measure heart. St. Cloud has a good one down the road.”

Someone may need to get a measuring stick out as Lizotte is convinced he’s 5′ 8″ as opposed to his listed 5′ 7″ and 152 pounds. Regardless, he recognizes his need to get stronger and he’s been putting the time in the weight room to work on that. He also knows he needs to transition his game to becoming a shooter as well as a passer. He told USAHockey.com “I pass the puck more. I’m not really that much of a shooter yet. I’m looking for the pass almost every time.” That’s certainly validated by his 92 assists in 131 Junior hockey games over the past two plus seasons.

Watching Lizotte play, he’s a good skater with a low center of gravity and as such you rarely see him upended. He has excellent stick skills, has a great motor and works hard and has an uncanny ability to snake through traffic. One of his greatest assets is his anticipation – always seeming to think ahead of the play. It’s one reason, despite his size that he is effective defensively as he seems to be ahead of his opponent on the forecheck or driving to the net. His style of play for those that go back a few years is similar to another 5″7″ forward, Jeff Panzer who also played his USHL hockey in Fargo and skated for the University of North Dakota from 1997 to 2001. Panzer racked up an amazing 228 points in 166 games including 99 assists in his last two seasons. Obviously, I’m not predicting Lizotte can duplicate those obnoxious numbers at the next level but the similarity in style of play is there. I’ve conversed with coach Motzko enough about Lizotte to know he feels he has found a real gem in a player that will join the squad in 2017-18. He fits Motzko’s style of play and will fortify his already formidable stable of young offensive players for the future. Neutral Zone ranked the 2016 -17 class of Huskies as the 10th best in college hockey.

We’ll keep an eye on Lizotte as the World Junior A Challenge winds down and for the balance of the 2016-17 USHL season.