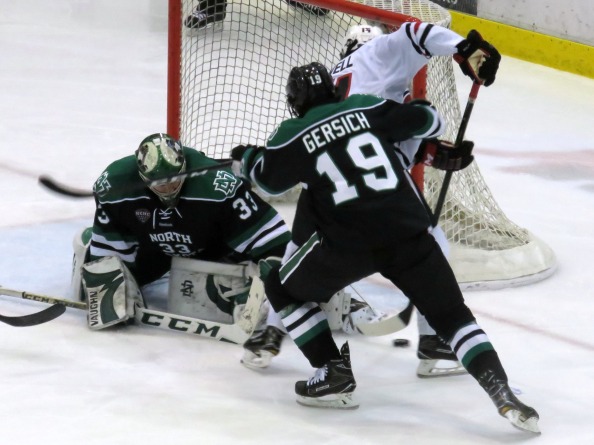 St. Cloud, MN – Another workmanlike effort by North Dakota including some timely goals and another 60 minutes of shutout hockey by Cam Johnson delivered a 3-0 win and sweep of the Huskies Saturday at the Brooks Center in St. Cloud. The weekend continued the trend of sweeping or being swept as the young Huskies try to find themselves in the 2016-17 season.  Shane Gersich scored his fourth goal of the weekend and Cam Johnson completed 120 minutes of shutout hockey as the Fighting Hawks improved their record to 2-3-1 in the NCHC. The Huskies were swept for the second time in three weekends on their home ice and saw their record fall to  2-4-0 in the conference.

The Huskies shot themselves in the foot again Saturday allowing a power play goal to Rhett Gardner (Poolman | Boesser) at 10:35 of period one with captain Jimmy Schuldt in the penalty box for holding. A shot from the point by Poolman was tipped in traffic by Rhett Gardner past Zach Driscoll for a 1-0 UND lead. Once again, the Huskies were schooled by the Fighting Hawks in the face-off department losing 12 of 15 while being outshot 15 to 9.

The second period found the Huskies exerting some strong 5 x 5 play on the Fighting Hawks early in the period especially on an extended shift by the Poehling brothers necessitating a time-out by UND at 4:23 to gain back some composure. But the inability to convert on two consecutive power play opportunities allowed UND to maintain their one-goal lead and eventually add another at 16:59 by Tucker Poolman. Brock Boesser made a nifty pass off the wall to himself and then fed Poolman (Boesser | Gardner) on the blueline who ripped a shot from the point past the glove side of Zach Driscoll for a 2-0 lead. In one of the better periods of play all weekend, the Huskies outshot UND 15 to 13 but again were out maneuvered in the faceoff circle 16 to 6.

An arguably unjust penalty to Will Borgen with .9 seconds left in period two led to a full power play to start the third period for UND. Borgen was whistled for a charging call after turning his body into UND’s Joel Janatuinen along the boards. The Fighting Hawks capitalized slightly over a minute into the period on Shane Gersich’s (Shaw | Wolanin) fourth goal of the weekend. On a heads up play,  Hayden Shaw made a rink wide pass to Gersich who one-timed a shot past Driscoll beating him glove side from the right circle for UND’s third and final goal. SCSU outshot UND 12/8 in the period.

UND’s Cam Johnson had a perfect weekend shutting out the Huskies twice and stopping all 36 shots he faced in the Saturday rematch. Zach Driscoll had another strong night in goal stopping 33 of 36 shots and solidifying his position as the starter for the Huskies. Total shots on goal were even at 36 to 36 for the contest.

Coach Motzko felt much better about his teams performance on Saturday considering it a good learning experience for his young team. “that was a hard, hard series – it was a war of a series. We showed up to play and we played extremely hard (Saturday).” he said.

The Huskies have a two week break in their schedule and then make a road trip to Western Michigan for a two game conference series on December 2nd and 3rd.