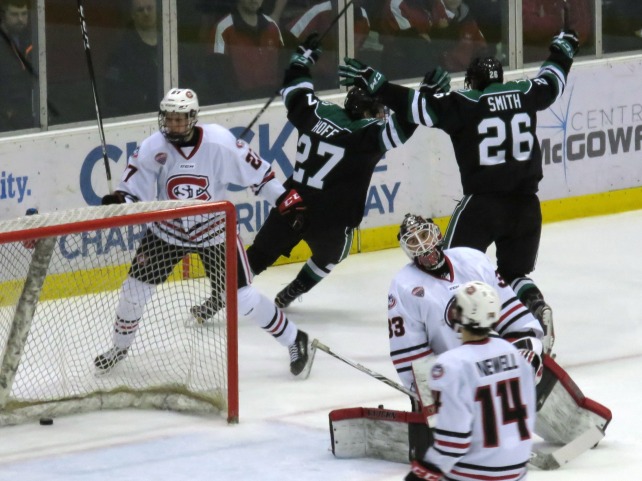 St. Cloud, MN – You can put the North Dakota six-game winless streak in the rearview mirror. Maybe it was desperation with a side of intensity, confidence and high energy as the River Hawks made a statement that they are back after a 4-0 drubbing of #12 SCSU on Friday at the Herb Brooks National Hockey Center. North Dakota broke open a close game scoring three goals in the last eleven and a half minutes of the second period to put  the game out of reach and earn their first conference win.  The loss dropped SCSU’s record to 6-5-0 overall and 2-3-0 in the conference while UND improved to 6-4-2 | 1-3-1.

Despite being outshot 16 to 8 in period one, the Huskies actually had the advantage in play for the first five minutes of the contest. However, the Fighting Hawks began to exert themselves on the Huskies and scored the first goal of the game at 16:46 on their only power play of the first period. A Tyson Jost one-timer from the point was stopped by Zach Driscoll but the rebound was snared by Shane Gersich (Poganski | Jost) for his 7th goal of the season and a 1-0 UND lead. SCSU was unable to convert on their lone man-advantage in period one, was beaten in the faceoff circle 18 to 7 and saw UND block 9 SCSU shots.

UND’s dominance surfaced in period two as they scored three goals while outshooting the Huskies 16 to 10 in the period. UND’s speed and energy seemed to throw the Huskies off-balance resulting in giveaways and a lack of response to the River Hawks transitional play and attack. SCSU yielded the second goal of the game at 8:34 off an offensive zone turnover as Ludvig Hoff (Poolman) skated the puck rink length on a 3 X 1 and wristed it from the right circle beating Driscoll glove side. Gersich (Ausmus | Boesser) then added his second goal of the game at 17:23 burying a rebound off a shot from the point by Gage Ausmus for a 3-0 UND advantage. The Fighting Hawks extended their lead to 4-0 at 18:42 when Gersich (Jost | Poolman) completed his hat trick off a quick transition down ice. Poolman found Tyson Jost and he braked at the side wall feeding the puck back to Gersich whose wrist shot from the top of the circles beat Driscoll just under the cross-bar glove side.

Driscoll was replaced by Jeff Smith for the third period merely to light a fire under the Huskies and he faced eight UND shots on goal stopping them all in a much closer period of hockey between the two squads. The period ended with eight shots on goal for each side and a 40 to 26 advantage for the game by the Fighting Hawks. UND had a 41 to 24 advantage in faceoffs and were 1 for 3 in man-advantage opportunities. SCSU was unsuccessful in all four of their power play attempts. Zach Driscoll stopped 27 of 32 shots in his 40 minutes of play while Jeff Smith stopped all eight shots he faced. UND’s Cam Johnson earned the shutout turning aside all 26 shots he faced.

A clearly disappointed Bob Motzko had little positive to say following the loss. “We got outplayed and out-competed and slaughtered on faceoffs” he said. “We had a handful of guys that were pushing and a handful that were awful. Tip your hat to North Dakota. They came in much more desperate and took us down.”

The two teams finish the weekend series on Saturday at 7:05 PM CT at the Herb Brooks National Hockey Center.