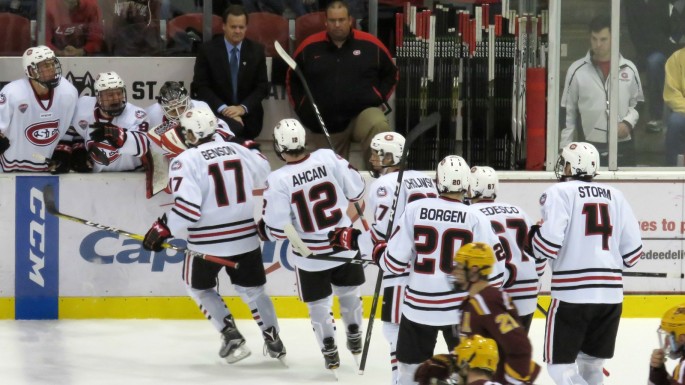 Amazing how a week changes things. A road trip to Mankato two weeks ago and a frustrating 4-1 and 6-4 sweep at the hands of the Mavericks. A week later, a crazy comeback on Friday for a 6-5 overtime win at Mariucci and another come from behind victory on Saturday in St. Cloud for a 3-2 win. Quite frankly, I felt it was going to be a difficult weekend vs the Gophers and it certainly turned out that way. However, I’ve got to be honest, I did not expect the Huskies to sweep a very talented Gophers team. With our DE zone coverage and goaltending an issue in Mankato there just seemed to be too many things to correct in a weeks time for anything better than a split at best. The defending Big 10 champion Gophers are a quality team returning over 200 points of offense, 12 upperclassmen, experienced goaltending and 13 NHL draft choices. The Huskies on the other hand, enter the 2016-17 season with 70% of its rostered players underclassmen and three netminders without a single minute of play in a Husky sweater. In other words, a lot of growing up to do quickly if they are to have success in 2016-17.

Friday’s contest saw the emergence of junior, Judd Peterson as a true leader on this years squad. His three goals on Friday including the game tying goal with 1:13 remaining in regulation showed the importance of upper class leadership as the nine first-year players try to get accustomed to the faster-paced and more physical Division I college schedule. Mikey Eyssimont again proved his importance on the power play netting a key third period goal to set up Peterson for his heroics five minutes later. The “fourth” line of Ben Storm, Daniel Tedesco and Jacob Benson chewed up lots of minutes, sustained extended pressure in the offensive zone and ended the night with a combined three points including a crucial key goal by Benson at 10:23 of the third period on Friday to close the score to 5-3. And despite struggles in goal with Jeff Smith allowing five goals on 32 shots, other first year players stepped forward and played key roles. Jake Wahlin had a terrific game scoring the game-winning goal in overtime, adding an assist and taking five shots on goal. Intriguing was the decision by coach Motzko to have three first-year players – Ahcan, Cholowski and Wahlin on the ice in overtime and it paid off with all three figuring in the game-winning goal. Zach Driscoll replaced Smith in the second period and parlayed his 20 minutes of shut out hockey to a start the following night in St. Cloud. The “comeback kids” made it exciting for the fans and started a trend that continued in St. Cloud the next game.

Friday saw more of the same from the night before as Minnesota jumped out to a quick 1-0 lead slightly over two minutes into the contest on a goal by Jack Ramsey and then extending the lead by two after a power play goal with a minute to go in the period by Taylor Cammarata. But, Driscoll and company shut the door from the start of the second period and began what was to be another comeback for the second game in a row. First, it was another “kid”, Jack Poehling who scored his first collegiate goal at 14:40 assisted by brother Ryan for his first point as a Husky. Jack Poehling is a shooter and ripped a shot that beat Schierhorn clean. He’s impressive as a gritty, skilled player and he’s going to have a tremendous collegiate career. The “fourth line” got into the act again with Benson getting his second goal in two games with a nice assist to linemate Daniel Tedesco to tie the game. And then as he did the night before, Eyssimont scored another key power play goal – this time the game-winner to give the Huskies a sweep. Zach Driscoll overcame two first-period goals to play the next 41 minutes of shut out hockey including a number of key saves in the waning moments to preserve the win. As a result, he’s probably earned the right as the “starter” for now on the basis of a .93 SV% on Saturday. As they did the night before, both first-year defensemen, Jack Ahcan and Dennis Cholowski played key roles with both picking up assists and finishing the weekend with two points each and +1. Both will be difficult to keep out of the depth-laden SCSU defensive lineup.

The bottom line is the team showed perseverance and the ability to battle back from adversity both nights. There’s a lot of “growth” to be seen with this team as they head into conference play. There will be some bumps in the road but the progression seen this past weekend are encouraging. It’s probably a testament to the quality of the first-year players as they are showing progress farther along than what is typically expected at the beginning of the season. They are playing an exciting brand of hockey with good flow, transition and a power play that is fun to watch. It gives the Husky faithful a lot to look forward to in this 2016-17 squad after some significant losses after last season. Once again, the coaching staff has done a nice job reloading this team with talented and skilled  players.

The Huskies return to non-conference play this weekend with a two-game series with WCHA member University of Alabama-Huntsville.