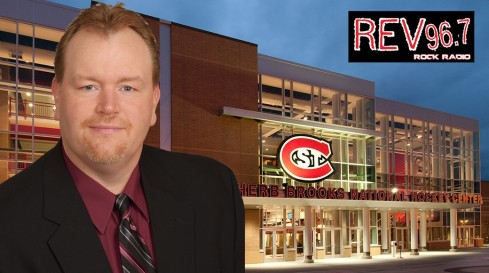 St. Cloud State Sports Properties has announced the radio broadcast team for SCSU men’s hockey for the 2016-17 season and it will include veteran sports radio announcer Jim Erickson and long-time Husky hockey announcer Dave Reichel. Erickson, a native of Braham, MN will do play by play and has a sports resume that includes doing broadcasts for the past two seasons for the Minnesota State High School Hockey Tournament and play by play for the Memphis River Kings of the Central Hockey League from 2004 to 2007. He also spent one season as Director of Broadcasts for Iowa Stars hockey of the AHL. He is currently employed by KLCI-FM in Blaine, MN as an on-air radio personality. Erickson is joined by former SCSU hockey All-American, Dave Reichel who will continue in the color commentary role he has been doing since 1990.

“We conducted a comprehensive talent search to find the most qualified, best voice to work alongside Dave, and we are excited about finding Jim,” said Matt Rau, general manager for St. Cloud State Sports Properties. “His background, and obvious connections to the state of Minnesota and hockey, made him an easy choice for us to consider. We know it won’t take long for our fans to embrace Jim and appreciate what he’ll bring to the Huskies hockey broadcasts.”

The broadcasts will be moved to St. Cloud radio station Rev 96.7, a member station of Townsquare Media, a national media company operating 310 radio stations across the country primarily in small to mid-sized markets. Townsquare media includes 24 broadcast properties in the state of Minnesota including several in St. Cloud. St. Cloud State University Athletics and Learfield’s St. Cloud State Sports Properties, announced in April that a five-year agreement has been reached with Townsquare Media of St. Cloud and its stations REV 96.7 FM, AM 1240 WJON and The FAN 1390 AM. REV 96.7 FM, will air all SCSU men’s hockey broadcasts. Football, men’s basketball, women’s basketball, coaches’ shows and a daily show will air on AM 1240 WJON and/or The FAN 1390 AM

Learfield Sports St. Cloud State Sports Properties is the university’s exclusive multimedia rights holder operating in areas such as event sponsorships and promotion, radio and TV and digital engagement. Learfield represents 120 colleges and universities throughout the country including the University of Minnesota and the University of North Dakota.