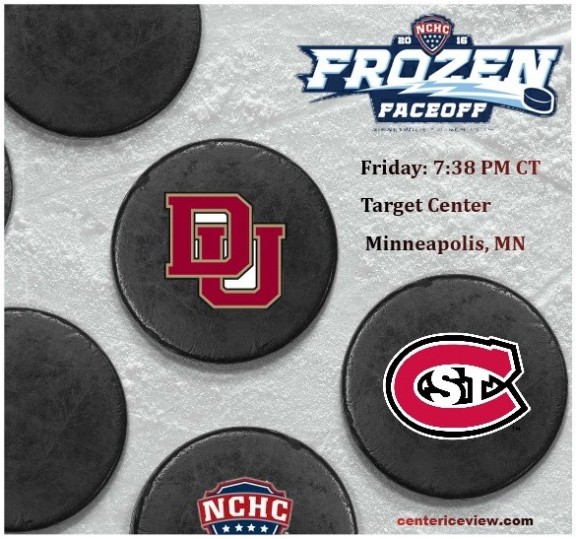 ST. CLOUD, MN – There were a lot of compliments being handed about during the NCHC Pre-Frozen Faceoff media conference call Tuesday as the Denver Pioneers and St. Cloud State University Huskies prepare to do battle in the third NCHC Frozen Faceoff on Friday at the Target Center in Minneapolis. Both teams respect each other and rightly so based on their 2015-16 results, national rankings and position in the ever so important Pairwise rankings.

Forget about the fact that the #3 PWR Huskies swept #6 PWR Denver on their home ice by scores of 5-2 | 6-2 on December 11 and 12. As far as SCSU coach Bob Motzko is concerned “you can take what you did before Christmas and put it in the garbage. We need to know their strengths right now. We need a good 48 hours to put in our game plan”. He went on to say that “We will see great players every game throughout the way. We are going to be in much tighter hockey games and we have to get comfortable in tight hockey games. Playoff hockey is different.” Senior captain Ethan Prow certainly respects the Pioneers stating “they have a ton of skill on their whole team. They have the ability to make plays all over the rink. We have to come in with the right mentality – we played some of our best hockey (in the earlier meeting).”

If the Pioneers were embarrassed by their winless month of December losing all four games to North Dakota and SCSU by a combined score of 20-5 they certainly made up for it since. After January 1, the Pioneers have compiled a 16-1-3 record with their only loss to Miami by a 3-1 score on January 29. That stretch of games has included sweeps over UMD, North Dakota and six wins over Omaha. On the other hand, the Huskies have put together a pretty good second half of the season with a 15-4-1 record since January 1. Coach Jim Montgomery calls this a “great test for us since our earlier meeting. St. Cloud is a great team. (They) have an explosive offense, defense that can score and great goaltending”. As to the Denver turnaround since Christmas, senior and captain Grant Arnold explained “we looked at what we needed to do better. Our leadership group did better. We were more committed to details, our work ethic and to each other”.

For St. Cloud, the series could come down to senior leadership.  As Motzko explained “our seniors give us confidence. They carry themselves high in the saddle. I can’t say enough about the leadership and care for our program”.

Denver is coming off a hard-fought but successful sweep of the Omaha Mavericks in the first round of the NCHC playoffs. On Friday, the Pioneers scored three goals in period two only to see Omaha add two of their own to close to within a goal by periods end. Danton Heinen was the game hero with a short-handed goal and empty net goal in the third period in the 5-2 win. In the Saturday rematch, the game was tied 2-2 after two periods and each team traded goals in the third to send it to overtime. Colin Staub scored the game-winning goal for the Pioneers in overtime for the sweep.

The Huskies had all they could handle with #7 seed Western Michigan on Friday. The Broncos pushed SCSU to overtime but the Huskies prevailed on a goal by first-year forward Patrick Newell at 16:31 of the extra session for the 4-3 win. On Saturday, the Broncos got on the board early but a three-goal rally by SCSU in period two put the game out of reach in the 4-2 win. SCSU placed 89 shots on goal in the series.

The Pioneers have been one of college hockey’s success stories since January 1 losing once in 19 games. A major reason for this turnaround is the improved play of the Pioneers first line of junior Trevor Moore (9-32-41), sophomore Danton Heinen (18-22-40) and first-year forward Dylan Gambrell (15-27-42). Sophomore Tanner Jaillet has also been the key to the pioneers turnaround having not lost a game since January 1 and compiling a 12-0-2 record, 2.19 GAA and .928 SV%. Defenseman, Will Butcher has been a leader on the blue line much like his counterpart, Ethan Prow of the Huskies. Butcher has 6 goals and 23 assists for 29 points and is +23 on the season. Senior forward Quentin Shore has added some pop to the offense as well with 12 goals and 22 points.

Sophomore forward Danton Heinen and junior defenseman, Will Butcher were both recently named to the All-NCHC First Team.Heinen was also named Forward of the Year in the NCHC.

Overall, there are very few facets of the SCSU game that are not performing well including the offense – 4.32 GPG (2nd in the country) defense – 2.16 GAPG (10th) and Power Play – 29.5% (2nd). Even the penalty kill that was struggling for the first half of the season has turned things around allowing only 2 goals in 31 opportunities (93.5%) since February 1.

Offensively, Kalle Kossila is tied for 7th in NCAA scoring with 48 points. Senior, Ethan Prow, leads all defensemen in the country in scoring with 8-27-35. Five seniors, Benik, Kossila, Murray, Morley and Prow have combined for 200 of the squads 458 points (43%). Sophomores Judd Peterson, Blake Winiecki and Patrick Russell have combined for 84 points. First-year forwards Mikey Eyssimont, Patrick Newell and Robby Jackson have combined for 67 points and have become key components of the SCSU offensive machine.

The defense of the Huskies is anchored by senior Ethan Prow who has also added to the offense with 8 goals and 27 assists and a +29 rating. And, he’s doing this with only 2 penalty minutes all season. He’s backed up by a solid core of young defenseman including sophomore, Nathan Widman (+20), Jimmy Schuldt (+32), Will Borgen (+17) and Jon Lizotte (+10). Junior Niklas Nevalainen has been a key defensive and offensive component to this unit with 23 points in 36 games and a +19 ranking. The Huskies are ranked 10th nationally in team defense allowing 2.16 GPG. The penalty kill has been improving and is currently ranked 33rd at 81.8%. As always, SCSU is one of the least penalized teams in the country currently ranked 59th out of 60 teams.

First-year defenseman, Jimmy Schuldt and Will Borgen were both recently named to the NCHC All-Rookie Team. Senior defenseman Ethan Prow and junior goaltender Charlie Lindgren were named to the All NCHC first team and Joey Benik and Kalle Kossila to the second team.

Charlie Lindgren’s exemplary play continues compiling a 28-8-1 record with a .926 SV% and 2.08 GAA. His 5 shutouts rank him 6th in the country in that category and 28 wins the most of any goaltender in college hockey

Throw out the results of the last series between these two teams in December as both teams have evolved quite a bit since then. This should be a very tactical game between these two squads. As the higher seed, SCSU will benefit from last change and they’ll be able to get many of the personnel matchups they would like to see. As coach Montgomery related in the media event – their #1 challenge is to “defend the offensive rush attack of the Huskies. We need to  defend the rush and stay out of the penalty box. We need to take away time and space and can’t focus on just one line – we have to focus on three lines. We need to play the angles well and eliminate  three-on ones and two on ones”. On the St. Cloud end of the ice coach Motzko concedes “we can’t change who we are (at this stage of the season). We’ll match lines and roll four lines. We need a good 48 hours to put in our game plan. We can’t have turnovers against their first line”.

Both teams are securely in the NCAA tournament. However, two wins in the Frozen Faceoff could make for a much more favorable matchup in the first-round of the NCAA tourney. These two teams are very similar in their explosive offenses, strength on the blue line and goaltending. As coach Motzko explained, it’s going to be a tight hockey game and if that’s the case whoever jumps out to an early lead in this one could have the advantage. This contest is certainly a toss-up from my perspective and a heckuva primer for the rest of the weekend and the NCAA tournament.

As always, all the pertinent links for this weekends games can be found HERE