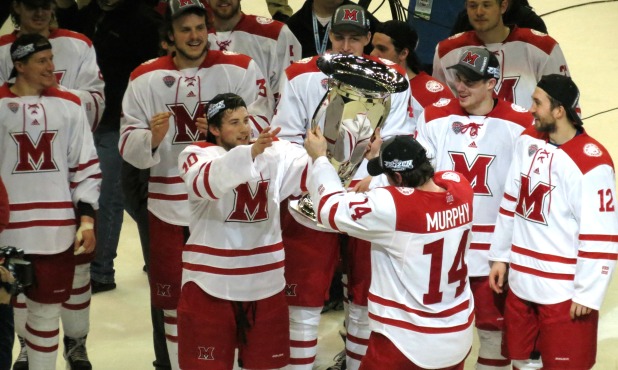 Blake Coleman netted a hat trick and the Huskies failed to convert several key man-advantage opportunities in a 3-2 loss in the championship game of the NCHC Frozen Four on Saturday at the Target Center in Minneapolis, MN. The Huskies took an early lead in the contest on a goal by Joey Benik, his 16th of the year at 12:00 of period one. Benik performed a rink length rush beating RedHawk goaltender, Williams stick side for a 1-0 SCSU lead. Miami tied the game late in period two on a great effort by Blake Coleman batting a cross ice pass from Riley Barber out of the air and sending the puck past SCSU’s Lindgren to tie the contest at 1-1. The Huskies re-took the lead at 6:03 of period two on a power play goal by Jonny Brodzinski, his 20th of the season with assists by Joey Benik and Ethan Prow for a 2-1 SCSU lead. Miami then answered with the first of two goals by Coleman before the end of the period. First, Coleman beat Lindgren with a one-timer at 7:37 on the power play to knot the game at 2-2. He then completed the hat trick tipping a shot by Chris Joyaux from the point for a 3-2 lead that was never relinquished. However, Coleman, the offensive hero of the game nearly put Miami in a jam as he was assessed a five minute major and game misconduct at 14:12 of period two. But, the Huskies failed to generate much pressure during the five minutes power play and ended period two down by a goal. And, despite three more man-advantage opportunities in period three, the Huskies failed to convert as the RedHawks held on to the 3-2 win and captured the championship of the 2015 NCHC Frozen Faceoff. Charlie Lindgren, who was named top goaltender of the weekend stopped 18/21 SOG and counterpart Jay Williams turned aside 19/20 for Miami. SCSU converted 1/5 power play attempts while Miami was 1/3. Despite the loss, SCSU is expected to receive an at-large invite to the NCAA tournament  by virtue of their #12 Pairwise ranking.

Stars of the Game: